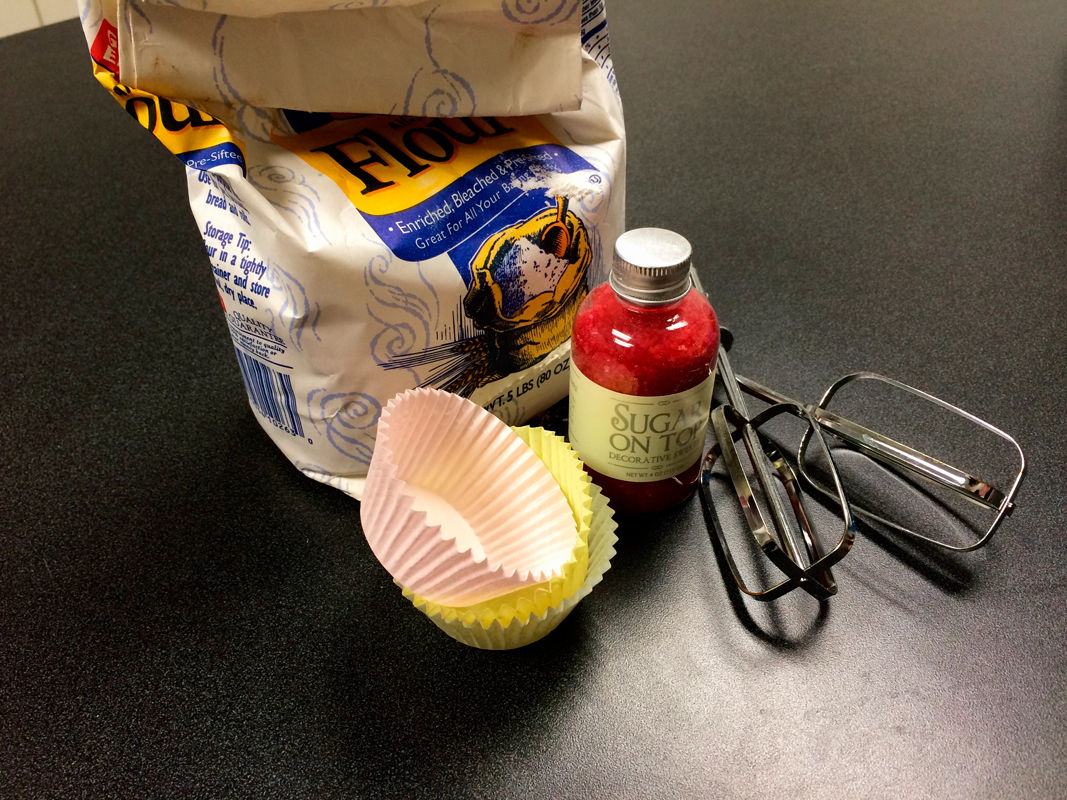 These champagne cupcakes use ingredients and materials found in most kitchens. If you love to bake, chances are you can whip these up in no time. (credit: Anne-Sophie Kim/Layout Manager)

For my first cupcakes of the semester, I’d like to look back to winter break, but also look forward to Valentine’s Day.

I made these cupcakes for my family’s New Year’s Eve party, and they were so delicious and festive. Champagne is such a classic New Year’s staple, but the addition of the strawberry really made the cupcakes brighter, both in color and flavor. Not to brag, but I think they were the most successful dessert there, even beating out all of the leftover Christmas cookies that everyone brought just to get rid of.

With Valentine’s Day just on the horizon, this is a great flavor to resurrect. Both strawberries and champagne just scream romance! Making these is sure to tell your sweetie how much you love them. So ditch the roses this year; cupcakes taste so much better.

Instructions
To start, preheat the oven to 350 ºF, and put cupcake liners in 17 of the spots on a cupcake tray. (I thought 17 was a crazy number when I read the recipe, but I actually had enough batter for exactly 17 cupcakes.) Set aside all dry ingredients in a separate bowl for later. This includes the flour, baking powder, baking soda, and salt.

For the batter, start by creaming the butter and sugar until they’re nice and fluffy, a step made much easier with an electric mixer. Then smell it, because it gives off the world’s most heavenly smell. Add the eggs and vanilla, then stir, scraping the bottom of the bowl if it looks like the eggs and butter aren’t mixing. Start bringing it all together by adding about one-third of the dry ingredients, followed by half of the sour cream; alternate adding those amounts to the bowl until all the dry ingredients are mixed in. Finally, gently stir in the champagne. Scoop all the cupcakes and bake for about 17 minutes, or until the cake feels bouncy when you poke it.

The frosting takes much longer than normal buttercream, so start making it as soon as you put the cupcakes in the oven, if not before. Place the champagne and strawberries into a small pot and simmer on medium-high heat until they reduce down to between two and four tablespoons. It will take a while, so be patient! Depending on how small you cut the berries, there still may be some chunks left, so strain those out. Then, start your frosting by beating the butter until it’s creamy. Stir in the powdered sugar a little at a time so that you don’t make a mess, and finally, add the reduced champagne — and that’s it! These look beautiful when frosted with a star tip and finished with some red sprinkles, but most important of all, serve them with love.