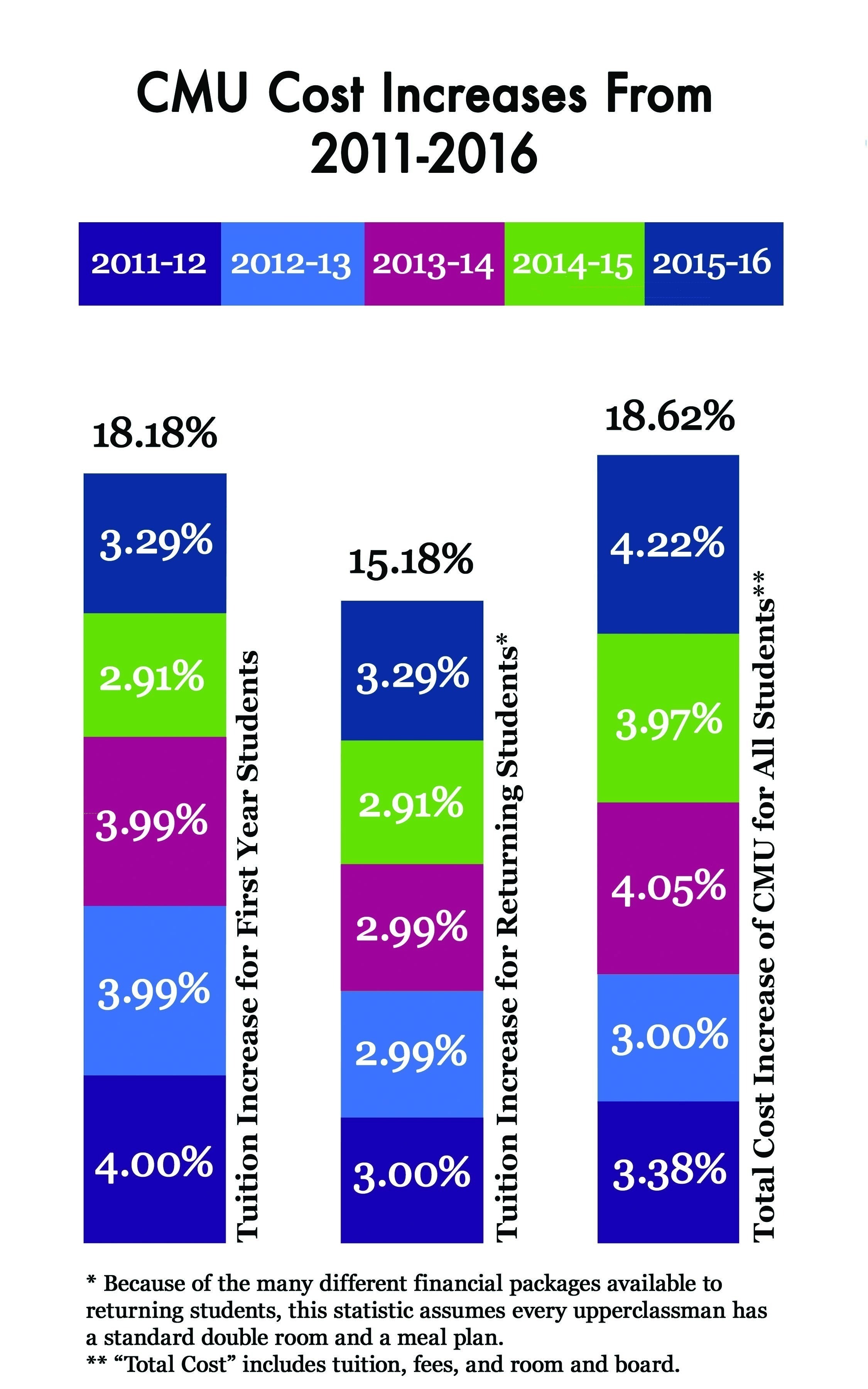 The cost of tuition, fees, and room and board is increasing by 3.38 percent for the next academic year, an increase that is more than last year’s 3 percent increase but less than 2013-14’s increase of 4.05 percent. Altogether, next year’s fees will total about $63,240 for undergraduates.

Emailing the campus community on Jan. 14, Vice President for Campus Affairs Michael Murphy said that tuition for incoming undergraduates and students who enrolled in fall 2013 or 2014 will be set at $49,610 for the 2015-16 academic year, while room and board now cost $7,520 for a standard double room and $5,310 for a standard first-year meal plan. Fees factoring into this total increase include a $150 transportation fee, which allows students access to Port Authority of Allegheny County services, and a $390 technology fee, as well as a $250 activity fee and $10 media fee for undergraduate students. The media fee supports the Collegiate Readership Program, which gives students access to The New York Times, Pittsburgh Post-Gazette, and USA Today on campus. Graduate students will be charged a $206 activity fee without a media fee.

Next year’s tuition increase, as well as the 2014-15 increase, deviated from previous years in that the percentage of the increase was the same for both incoming students and upperclassmen. The 2013-14 academic year’s increase implemented a tiered pricing in which first-year students were hit with a larger increase (3.99 percent) while upperclassmen received a lower 2.99 percent increase. Similarly tiered increases of about 4 percent for first-years and 3 percent for upperclassmen were also implemented for 2011-12 and 2012-13.

Costs for fees and room and board are largely set by departments, such as Housing and Dining Services for meal plans and room and board, who analyze their financial needs and submit their proposed costs to Murphy. Murphy then discusses the proposed rates before they are presented to the board of trustees. These proposed rates should remain within an inflationary range of around 3 to 3.5 percent for non-tiered years, according to Murphy.

“What we thought with the 3.3 percent [tuition increase] ... was that it’s aggressive relative to our history, but consistent with many things that we’re doing,” Murphy said, mentioning the Jared L. Cohon University Center and other initiatives to enhance students’ experiences as examples of improvements these costs help to fund.

According to U.S. News & World Report, Carnegie Mellon ranked number five for most expensive private colleges and universities with a listed 2014-15 tuition and fees cost of $48,786 on the list. The university came behind Columbia University, Sarah Lawrence College, Vassar College, and Trinity College in that order. Columbia ranked highest on the list with a tuition and fees cost of $51,008.

“We need to look at a much larger picture here,” said first-year economics major Yash Maheshwari via email. Maheshwari is a member of Carnegie Mellon’s chapter of MoneyThink, a nationwide organization aimed at teaching financial literacy to high school students. “The tuition is not an expense but an investment for the next 60 years of our lives. What seems like a considerable increase today, may lead to improved gains in the long run.”

Speaking about rising tuition nationwide, Murphy said, “The real question is ‘What is the value that you return to students?’ And it’s both an economic value and a non-economic value, and I think as a nation it’s important that we recognize both.”

“On the other hand, I wouldn’t want us to get complacent about [rising costs],” Murphy continued. “And so we need to make sure that we’re cutting costs where we can cut costs, investing where we need to invest, and making sure that students have the supports that they need.”