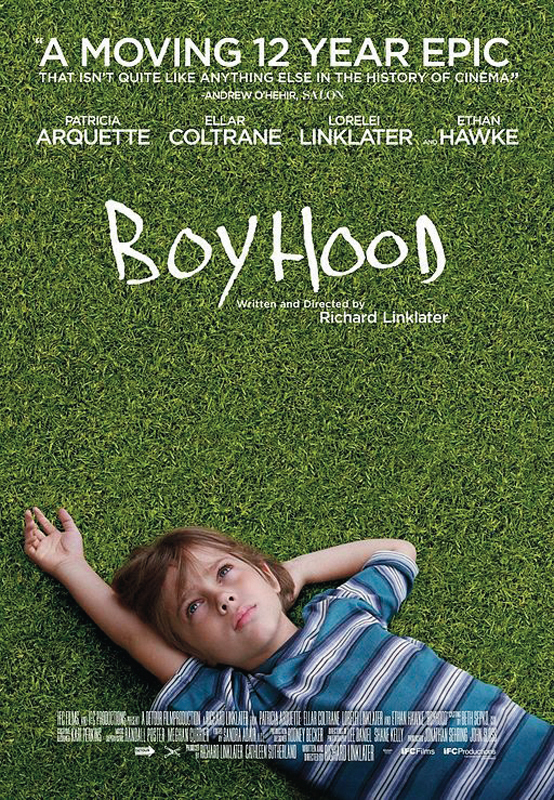 And the best movie of the year goes to…

We’ve all heard about Boyhood, written and directed by Richard Linklater (Dazed and Confused, the Before trilogy) which begins with 6-year-old boy Mason (Ellar Coltrane) and follows him through his tween and teen years, up until he hits 18. And, yes, Linklater uses the same boy, not to mention the same cast, for 12 long years.

The general consensus is that those 12 years automatically classify it as a masterpiece. Anyone who has heard of Boyhood usually exclaims the same things:

“It took 12 years to make this film!” “They used the same cast for 12 years, the same boy from when he was six to 18! Can you believe it?” “It was incredible! It made me so nostalgic for my childhood because I’ll never get it back.”

All of those things are true. And, yes, Boyhood was an amazing film. It’ll most likely dominate this year’s awards season. The scope and ambition of this project is beyond comprehension and the stakes, in retrospect, are impossibly high. What if some people die in the allotted 12 years time? Who is going to finance a film for that long? What if Ellar Coltrane turns out to be a bad actor?

Fortunately, Linklater triumphed — and what an amazing triumph Boyhood turned out to be. Linklater’s dangerous decision to work with the same cast for 12 years allowed him to portray youth so accurately that the film feels like a true journey through a person’s life. Patricia Arquette, who plays Olivia, deserves at least three Oscars for her role as Mason’s struggling-yet-steadfast mother. The performances of the entire cast transcend acting and boil down to sharing essences of actual people with the audience.

The amazing part of Boyhood is that it is not just a movie. It transcends the film medium because there are no plot twists, no villains, nor are there any “extraordinary” events that result in typical cinematic climax. But that’s what makes it special. By giving attention to universal experiences that individuals would not ordinarily deem movie-worthy — such as going bowling with your father or waiting in line for the newest Harry Potter book — Linklater provides moments of realization that every one of life’s moments is precious. Many of the moments in the film are genuine experiences that we have personally gone through, but usually store away as mundane or insignificant —yet those moments are essential to our own coming-of-age adventures oh-so-many years ago.

It’s easy to label Boyhood as nostalgic, leaving us desperately hoping to relive those moments again and again. And yes, the story and the characters are so authentic that we connect our memories with those of the film. However, the most important experience from Boyhood stems from Mason and his family letting go without even a second thought.

Naturally, there is no traditional plot in this movie — just story. Mason doesn’t dwell on the hardships of his youth, nor does he grasp onto any glorious memories. He simply moves on. There is no significant benefit that we, the audience, get from clinging to the memories of our youth. Time and change are inevitable, elusive engines of life, so our childhood stays behind while we must grow up and move on. But that does not mean we are forced to toss away our sensibility as we get older.

Why did Linklater choose to document 12 years of someone’s childhood? Why not make Adulthood? Or Midlife Crisis? Or Old Age? If it’s just for the sake of nostalgia, then what’s the point of spending 12 years on a film?

We can still nourish the sense of wonder and curiosity that made our youth so special. It’s optimal to fully welcome every waking moment of our lives and to awaken the next day as a wiser, more courageous person than yesterday.