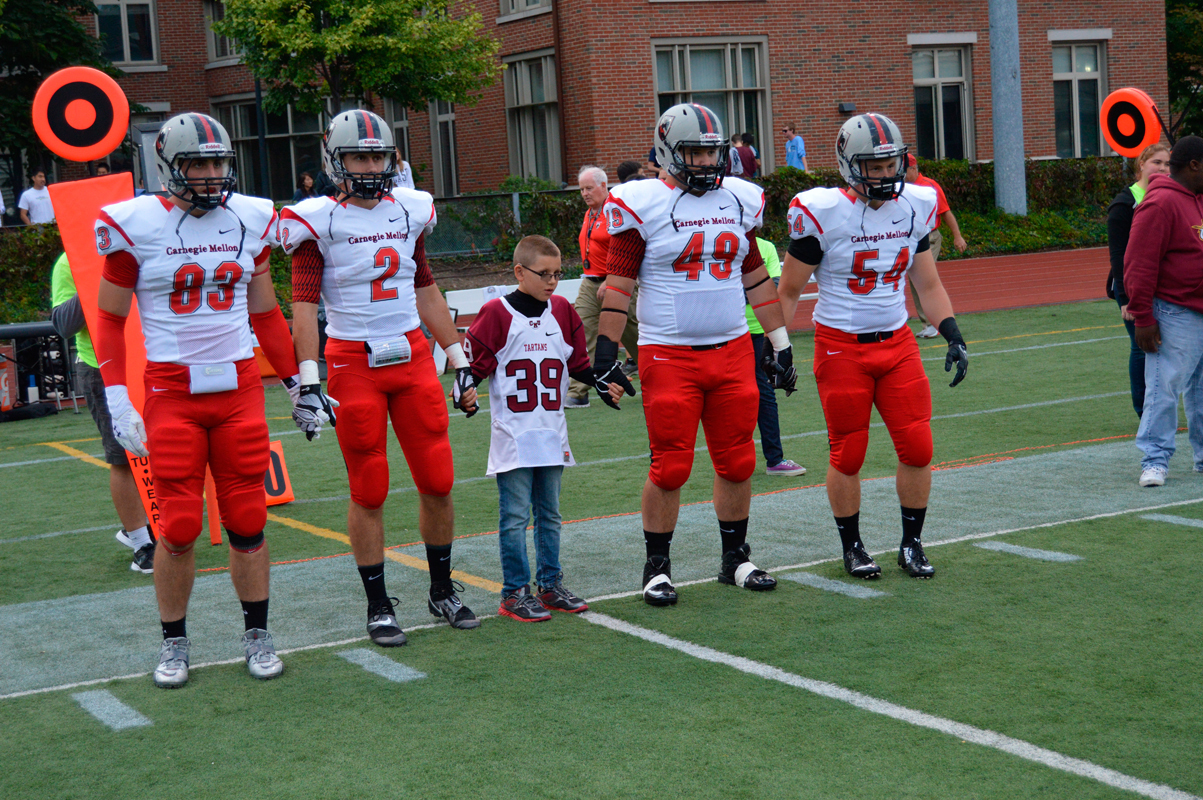 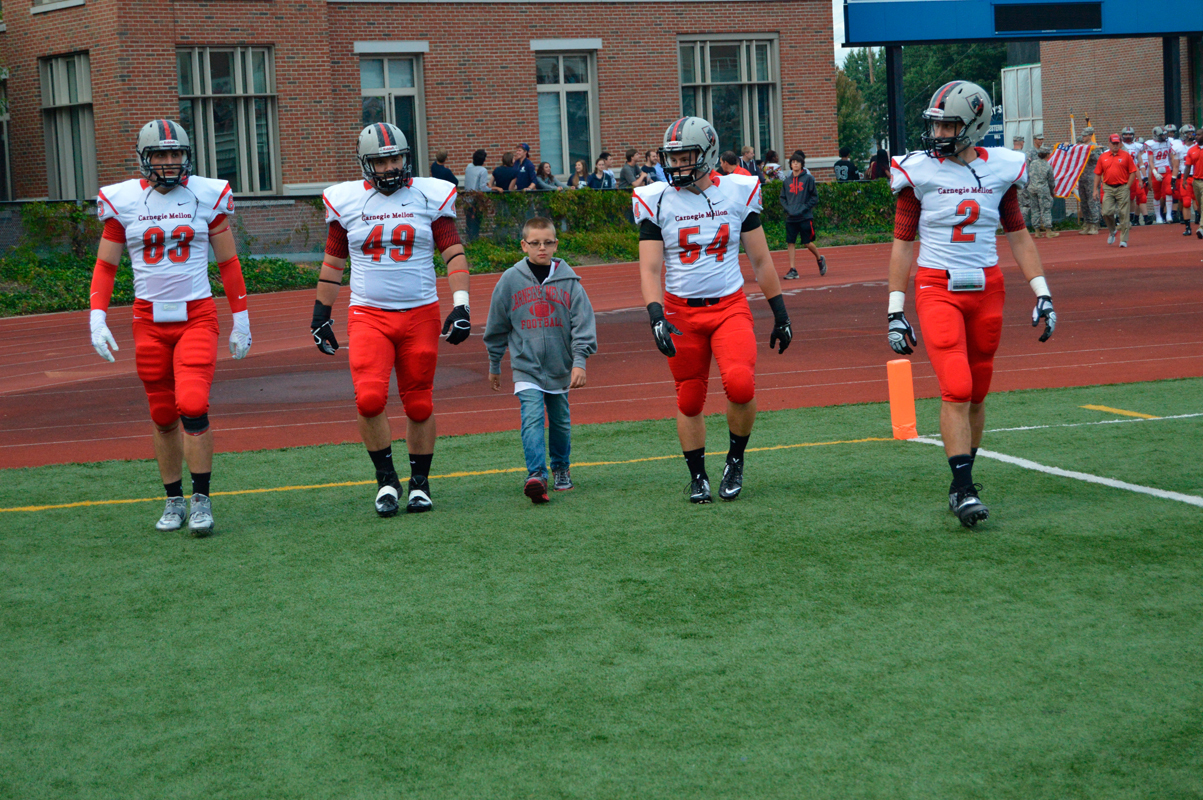 When scanning the benches at Carnegie Mellon’s next home football game on Sept. 27, you may see a Tartan jersey just a bit smaller than the others.

This jersey belongs to Brock Kitterman, a 9-year-old boy proud to be the latest addition to the football team. Kitterman is different than the others on the field for reasons besides his 4-foot-6 frame; Kitterman suffers from bilateral retinoblastoma, a very rare eye cancer.

When he was just 12 weeks old, Kitterman underwent chemotherapy for six months to calcify the tumors. Though the tumors shrank, allowing his retinas to reattach, the treatment significantly compromised his hearing. Brock is considered legally blind and deaf.

Kitterman became involved in the Carnegie Mellon football program as part of Team IMPACT (Inpsire, Motivate, and Play Against Challenges Together), an organization that matches college sports teams with children battling chronic illnesses.

Kitterman’s past medical problems still have an effect on him today. Largely deprived of his sight and hearing, Brock struggled socially, finding it challening to pick up on social cues, even those as simple as a smile. His mother, Tammy Kitterman, noticed this problem and mentioned it to a doctor at Children’s Hospital of Pittsburgh.

After a few weeks, the doctor suggested joining Team IMPACT. Tammy signed Brock up for the program and he was matched up with the Tartans.

“When we first heard Brock would be matched with the football team, we were extremely apprehensive,” Tammy Kitterman said, “but after meeting the guys, we all agreed it couldn’t have been a better team.”

Head Coach Rich Lackner was approached by Director of Athletics, Physical Education and Recreation Joshua Centor about “adopting” Brock, and was enthusiastic about the idea from the start.
“Brock is an honor and an opportunity to impact the football program at Carnegie Mellon,” Lackner said.

According to Tammy Kitterman Brock now attends several practices each week, prepares the locker room for games, and supports the Tartans at every game. When the team is on the field playing or practicing, the team managers play a “crucial role” on the sidelines, keeping Brock involved and busy during the game.

Brock was unanimously voted captain for this fall season.

“Brock truly brings a unique perspective on life,” Lackner said. “When you look at the challenges he faces every day, it makes your own problems seem insignificant.”

Both Lackner and Schneider commented that Brock has helped create an even stronger team dynamic. “Brock serves as a daily reminder that we are incredibly blessed to be playing college football,” Schneider said.

Although he cannot play football, instead cheering the Tartans on from the bleachers, Brock remains active in other sports. This past summer Brock completed a triathlon. A number of Carnegie Mellon football players went out to watch him compete.

“I am absolutely amazed at Brock on a daily basis,” Lackner said. “He never stops pushing himself.”

After his first-place finish in the triathlon, Brock was treated by the football players to a trip to Kennywood amusement park.

“It really showed how trusting [Brock’s parents] were with our football players,” Lackner said. “After just meeting the players weeks earlier, they felt confident their son was in good hands.”

Brock’s mother has seen Brock grow significantly since the start of the program. She, as well as Coach Lackner and the players, have all noticed remarkable improvement in Brock’s social skills. “He has opened up a lot more and gained a lot of self-confidence,” Tammy Kitterman said. “He really considers the football guys to be his closest friends.”

Carnegie Mellon’s basketball team is currently in the process of “adopting” as well; their prospective adoptee is a 5-year-old boy who has acute lymphoblastic leukemia. “Our hope and expectation is that he will be having such a great time with us that ... CMU basketball will be front and center in his thoughts day in and day out, rather than his daily chemotherapy treatments or frequent hospital visits,” said junior business administration major and forward for Carnegie Mellon’s basketball team Kevin Stursberg. “The kid is a warrior!”