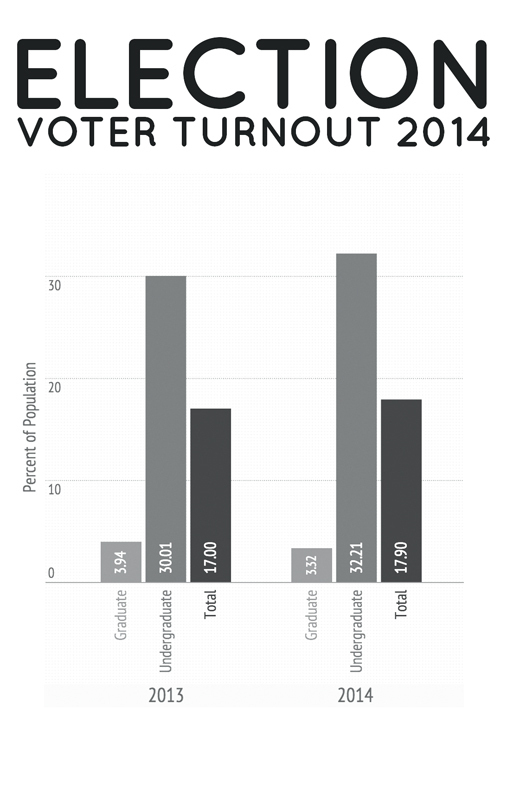 Student voter turnout showed a slight increase over previous years, with 17.9 percent of total students voting. 32.21 percent of undergraduate students cast their votes, as compared to 30 percent in 2013. Graduate student voting decreased, however, with only 3.32 percent of Carnegie Mellon’s graduate population voting, a small drop from the 3.94 percent who voted in 2013.

Glasner and Ray ran their SBP/SBVP ticket on a platform of getting students more involved in their representation, promising to push for a number of reforms including restructuring dining plans to be more desirable to upperclassmen and changing the school’s dorm alcohol policy to one which uses an internal system rather than one which involves the police, similar to the system currently in place at all eight Ivy League universities.

While not designating one policy as a top priority, Glasner said, “I’m very passionate about dining, and I’m also passionate about looking into the current alcohol policy on campus.”
“I think every change that I want to happen is going to be a year’s process, if not more,” Glasner continued. “So, getting them all started at the beginning of the year is going to mean weekly meetings with administration, bringing students on board, and getting student feedback.”

Kothandapani campaigned on her experience serving on the university’s Joint Funding Committee (JFC) and promised to provide an easier-to-understand budget process for student organizations.

Kothandapani said that “starting the application for next year’s JFC reps” would be her first task when taking office, and spoke about the number of votes she received, saying “it feels really good to have that support.”

Michalak built his campaign around a set of reforms beginning with the organization recognition process, setting up a better system for student organizations to receive advice, and creating an improved system for room registration. Michalak also spoke of supporting broader campus reforms, such as expanding the Amnesty International policy for alcohol to include drugs, and the prospect of establishing gender-neutral restrooms.

“A lot of people see the organizations of Carnegie Mellon as the bread and butter of the university,” Michalak said, stating that he wished to immediately focus on improving the organization recognition process and encourage graduate student participation and representation in student organizations.

Ray spoke of her joint candidacy with Glasner, saying, “It ended up being the perfect relationship, because we weren’t best buddies before we came in, so we had that sense of respect for each other. But now we get along so well; we will crack jokes with each other all the time.” She added, “It’s great. I honestly love working with him.”

“From what I’ve seen so far, we work very well together,” Glasner agreed.

“There hasn’t been too much experience on the working relationship between the two of us because the work’s just getting started.”

Ray encouraged students, saying, “don’t be hesitant to approach us with anything. We have enough experience to make things work.”

Glasner stated that he was honored to have been elected as SBP and said, “I really want to help improve the student experience at Carnegie Mellon, and if anyone has good ideas, I absolutely want them to share them with me. I look forward to a productive year.”