Both tennis teams fall just short of titles at UAAs 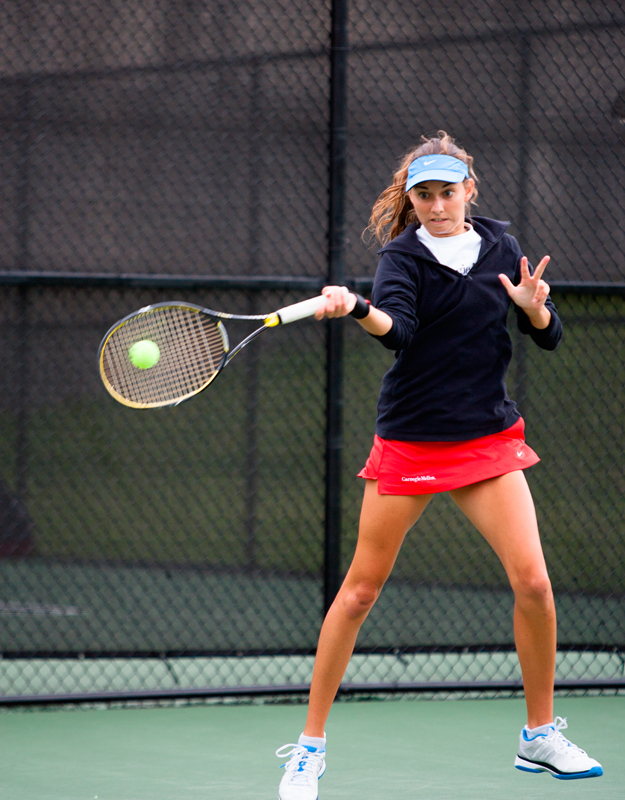 Junior Angela Pratt paired with first-year Nicholle Torres in doubles and won 8–1. She also played singles and won in straight sets 6–0, 6–0, which was also the score of every singles game. (credit: Jonathan Leung/Assistant Photo Editor)

The top-10 ranked Carnegie Mellon men’s and women’s tennis teams both competed in the University Athletic Association (UAA) Championships in Orlando this weekend. Both teams made it to the finals, but ultimately fell short of taking home the title.

The ninth-ranked men’s team started off the competition on Thursday against the University of Rochester.

The Tartans came out strong in doubles play and jumped out to an early 2–1 lead after the duos of juniors Christian Heaney-Secord and Will Duncan and sophomores Yuvraj Kumar and Joel Lankford won both of their matches, 8–2 and 8–4, respectively.

The Tartans then put it away by taking five of six singles matches on their way to a 7–2 match victory. Sophomore Abhishek Alla, and first-years Kiril Kirkov, Duncan, and Kumar all won in straight sets to quickly seal the victory and punch their ticket to the semifinals. Kirkov was particularly impressive, only surrendering a single game in his two sets, 6–1, 6–0.

In the semifinals on Friday, Carnegie Mellon faced off against the fourth-ranked Emory Eagles for the right to go to the finals for the first time ever.

The Tartans came out swinging, winning all three doubles matches. Heaney-Secord and Duncan made it look easy with their 8–2 win, while both Kirkov and junior Bryce Beisswanger and first-year Kenny Zheng and sophomore Yurjav Kumar won 8–5.

The Tartans split the singles matches with the Eagles 3–3, but moved on to the finals due to their edge in doubles, winning 6–3.

In the Saturday finals, the Tartans were up against second-ranked Washington University in St. Louis. Carnegie Mellon fought well, but were ultimately no match for the Bears.

Kirkov was by far the most successful Tartan, winning both of Carnegie Mellon’s points on the team’s way to a 2–7 loss. He and Beisswanger took the lone doubles victory, 9–7, and Kirkov was the only singles victor for the Tartans, winning in straight sets 6–4, 6–2.

The eighth-ranked women’s team started out competition against the University of Rochester as well. The 9–0 victory was their second in a row as they looked to be peaking at the right time.

In singles play, all six women won in straight sets with no one giving up more than three games in a single set.

Sophomore Elizabeth Martin did not drop a single game on her way to a 6–0, 6–0 win, while fellow sophomore Abbey Hamstra and junior Lydia Utkin each surrendered only one game as they each won 6–0, 6–1.

On Saturday, the women took on ninth-ranked Washington University in St. Louis for a chance at the finals. This time, the Tartans started off a bit more sluggishly with only Pratt and Torres winning a doubles match.

Down 1–2 going into singles play, Carnegie Mellon knew they had to take care of business and did just that, taking five of six singles matches. Cecil, Torres, Tsu and Martin all won in straight sets, with Cecil truly dominating with a 6–0, 6–1 win.

Pavia won the fifth singles point, but had to work for it, dropping the first set 1–6 before battling back to take the last two sets 7–5 and 6–3.

On Sunday, the Tartans faced off against the second-ranked Emory Eagles in the finals. It was going to be a long day for the Tartans when they dropped all three doubles matches. Cecil took the one Tartan point in singles play as she won 6–0, 6–3 on the way to the Tartans’ 1–8 loss.

Even though both teams left on a bittersweet note after falling in the finals, the season is not over: NCAA Championship draws will be announced on May 5.