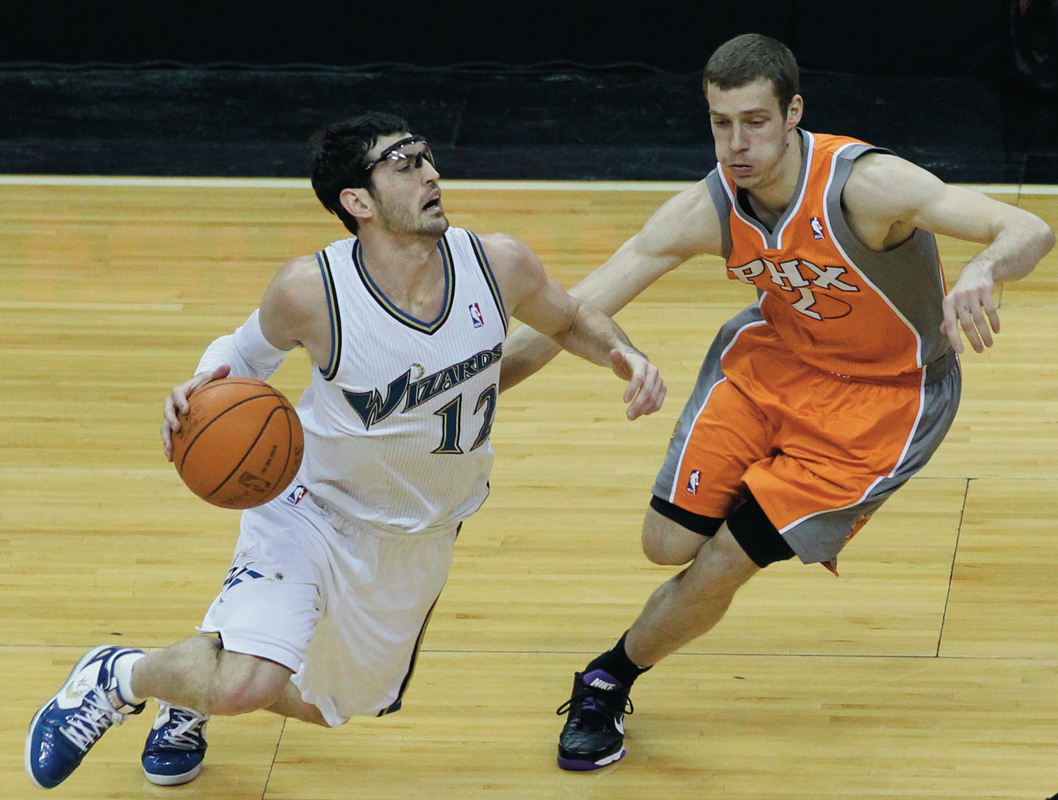 Phoenix Suns guard Goran Dragic, right, is a contender for most improved player. As the end of the season approches, his performance stands out. (credit: Keith Allison via Flickr)

It’s the end of March, the time of year when there are fewer than 12 games left for each team in the NBA regular season. Playoff seeding is more or less decided, barring any major upsets, and teams have generally settled into a rhythm and developed an identity for the season, one that they will carry through the playoffs. We know who the real contenders are and who the pretenders are. With the conclusion of the season close by, this time is as good as any to hand out the major regular season awards to those who deserve them.

Sixth Man of the Year
Rather than starting with the big ones first like the MVP, we begin from the other side of the popularity spectrum. The Sixth Man of the Year award rewards those players whose contributions coming off the bench have propelled teams forward and significantly improved them. Who is this year’s best sixth man?
Perennial contender and 2010 Sixth Man of the Year Los Angeles Clippers shooting guard Jamal Crawford has made a case again for himself. He is averaging an essential 18.6 PPG for the Clippers and their fast running offense, ensuring that the team always has reliable scoring off the bench. Crawford has unquestionably been the Clippers’ best player and deserves recognition for it.
Another perennial contender and 2008 Sixth Man of the Year, San Antonio Spurs shooting guard Manu Ginóbili is having a renaissance year. Part of the Spurs’ aging Big Three (also including forward-center Tim Duncan and point guard Tony Parker), it was speculated that Ginóbili would retire at the end of last season after having probably the worst season of his career and being upstaged by the likes of Danny Green and Kawhi Leonard in the Spurs’ rotation. He’s back to being himself; despite lower playing time, Ginóbili has been incredibly efficient and keeps rolling on to potentially the best record in the NBA.
A surprise contender from a pleasantly surprising team is Phoenix Suns forward Markieff Morris. Part of a whole roster of improved players, Morris stands out for his contributions from the bench. Along with his twin brother power forward Marcus Morris, Markieff has carried his team’s second unit time and again, and has stepped up to the cause on several
occasions.

Winner:
Manu Ginóbili. He’s unquestionably the best player in this conversation, and when the Spurs are rolling like this, no one else deserves it more.

Most Improved Player
The first major contender for this award is Phoenix Suns guard Goran Dragic. Dragic has been nothing short of sensational this season. He has carried a Phoenix team projected to be at the bottom of the Western Conference to legitimate playoff contenders.
With the help of star acquisition point guard Eric Bledsoe (who mind you, has missed nearly three months of action) and coach Jeff Hornacek, the Suns have been playing thrilling basketball, resembling the Houston Rockets of last season. Much of it is down to Dragic though, who was snubbed from the All-Star Game despite having a career year.
The second contender is New Orleans Pelicans forward-center Anthony Davis. Such has been Davis’s rise this season that he is being seen by most coaches to be an MVP candidate in the coming years.
Sporting an absurd PER of 27.10 in just his second year in the league and at only 21 years old, Davis is a star in the making. He leads the league in blocks and currently averages over 20 PPG and over 10 RPG. His PER is also the fourth highest in the league behind only LeBron James, Kevin Durant, and Kevin Love. Davis is a monster in the making, and the Pelicans have a franchise player on their hands.

Winner
Dragic, only because his rise is more surprising. Davis is also destined for bigger awards.

Defensive Player of the Year
For a while it seemed like absolutely no one could stop Indiana Pacers center Roy Hibbert from taking this award home. For the first half of the season, Indiana’s defense was one of the most suffocating seen in years and even Tom Thibodeau’s Chicago Bulls weren’t keeping up. His rim protection is impeccable and has been key to Indiana only allowing 91.7 PPG this season.
However, a new contender has emerged over the recent months. Forward-center Joakim Noah has carried the Bulls on his sleeve like no one thought he could.
Indiana’s PPG allowed was lower than 90 for a while, and the Bulls’s PPG allowed higher than 93. Its now down to 91.9, just 0.2 more than the Pacers. Noah has also brought this number down pretty much alone, as he leads the team in rebounding, assists, and blocks. And all these statistics do not even begin to measure the heart with which Noah plays.

Winner
Noah. The Pacers have fallen in performance while the Bulls have only become better, and Noah is the reason for that, especially without any other star on the team.

Rookie of the Year
In a draft class being compared to the disastrous 2001 draft, it wouldn’t be too hard to stand out with some high numbers. And yet there is only one player who has shown any true potential of becoming a superstar: Philadelphia 76ers guard Michael Carter-Williams (MCW).
MCW has been very good on a 76ers team that just tied for the longest losing streak in the history of the NBA. But even he has his flaws, notably his shooting and high turnover rate. But he is averaging 16.7 PPG, 6.0 RPG and 6.3 RPG while being sixth in the league in steals at 1.92 per game. He has major talent, but needs a better supporting cast and coaching.
Honorable mentions go to Orlando Magic shooting guard Victor Oladipo and Utah Jazz point guard Trey Burke.

Winner
MCW. Those numbers might be inflated by pace, but are excellent nevertheless.

Coach of the Year
As the Spurs cruise toward a potential No. 1 overall seed (yet again), Gregg Popovich’s name is being thrown around as possible coach of the year (again). There isn’t much that isn’t known about him, and he is certainly the best coach in the league and in the conversation for one of the greatest ever. He’s also remaining steadfast in performance despite the fact that each of the Spurs’ Big Three have missed rather significant time.
The first surprise contender is Portland Trailblazers coach Terry Stotts. The Trailblazers were not even expected to be in the conversation for the playoffs this year, but after their 24–5 start, they were labeled as potential contenders. While they have fallen off their torrid pace since, they still are in the fifth seed, and Stotts has been doing all he can to squeeze the maximum out of role players like forwards Thomas Robinson and Joel Freeland.
The biggest surprise is from the most surprising team. Jeff Hornacek has coached the Suns, which was expected to be one of the worst teams, but is now one of the most exciting teams.
Nearly every Suns player is having a career year and the Desert Cinderellas have made a case for themselves to be in the contender picture in the next few years.

Winner
Hornacek. As good as Stotts has been, the Suns are just two-and-a-half games behind the Trailblazers, despite having a significantly poorer roster.

Most Valuable Player
The last two years the MVP trophy has been contended between Miami Heat small forward LeBron James and Oklahoma City Thunder small forward Kevin Durant. Both times Durant has come second, with James taking home the hardware and taking his MVP tally to four. He has begun to establish himself in the Greatest NBA Players of all Time conversation. However, this year may be the one when Durant finally gets his due.
His defense, frequently criticized over the last few years, has improved by leaps and bounds, Durant has been nothing short of sensational.
The race to win this trophy is so close, because James has been no slouch either. He’s averaging 27 PPG, 6.9 RPG and 6.4 APG.
While these might be lower than his career averages, its because he’s also playing less.
Also, all of this has been with shooting guard Dwyane Wade in and out of the lineup and the Heat having to use seldom-used players like small forward James Jones and guard Toney Douglas in place to start. James is carrying the Heat yet again.

Winner
Durant. It has to be him. But the race is so close, James could still win it if he goes on a tear over the next 10 games or so.