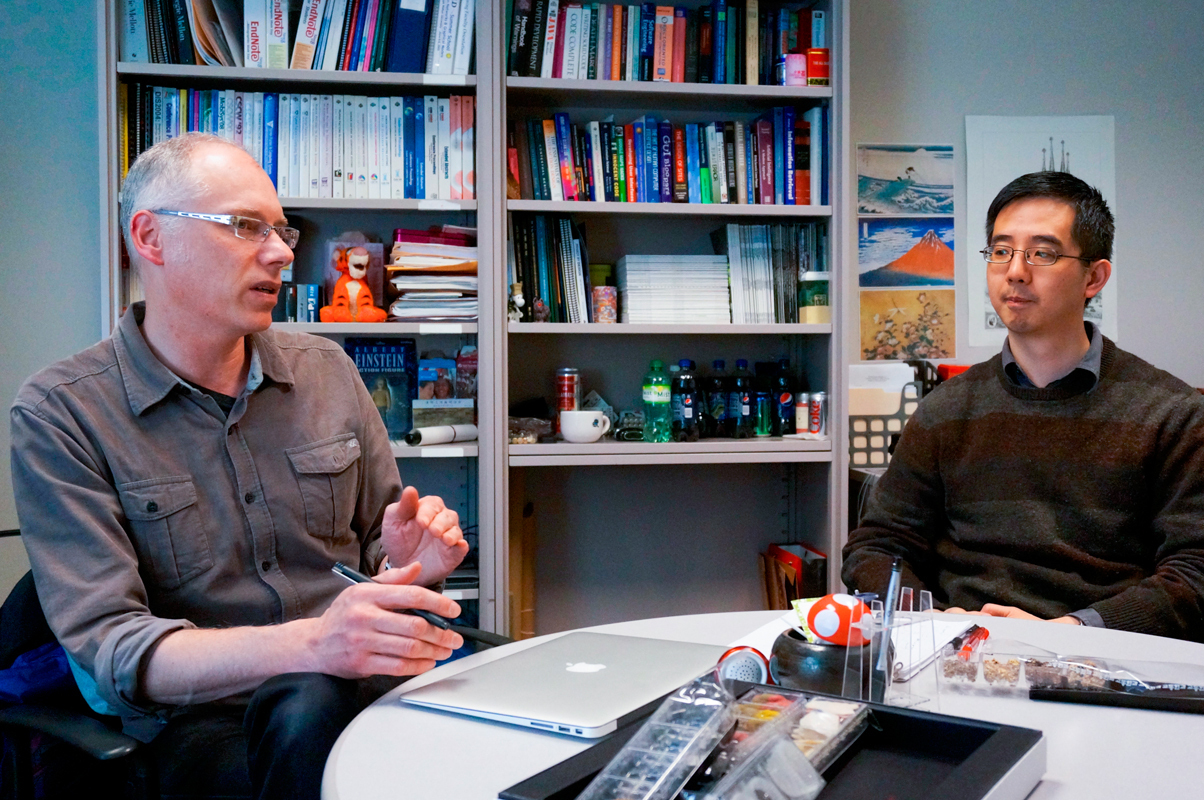 Zimmerman (left) and Hong (right) are researching how to use a smartphone application to predict the onset of depression. (credit: Abhinav Gautam/)

How smart have our smartphones become? So smart that they might know us better than we know ourselves, according to associate professor of the School of Computer Science and the Human-Computer Interaction Institute (HCII) Jason Hong and associate professor of HCII and the School of Design John Zimmerman. By taking advantage of how much information our smartphones are able to obtain, Hong and Zimmerman are studying how smartphone data can help predict the onset of depression.

The World Economic Forum recently released its Top 10 Emerging Technologies list for 2014. One of these innovations was the quantified self — the idea that data obtained from the monitoring of a person’s daily routines can be usefully analyzed.

“Quantified self is sort of the idea that there is small data about each individual,” Zimmerman explained. “We’re looking at the small data — what all of the stuff we might know about an individual is and if we can pull relevant and meaningful information.”

The quantified self has been made increasingly possible as smartphones continually advance. For example, there are many applications and devices that allow users to track their exercising and eating habits in a way that can help them improve their health, such as Fitbit or MyFitnessPal. Hong and Zimmerman’s research takes this concept one step further by delving into how smartphone data can reveal symptoms of depression. Originally funded by the Defense Advanced Research Projects Agency (DARPA), their research is focused on detecting depression in returning soldiers.

Their main motivation behind this endeavor stems from the fact that it often takes four to six weeks to get a first appointment with a therapist. According to Hong and Zimmeran, installing their app, called Big Black Dog, will allow individuals to self-monitor their habits in a way that will allow them to receive a better diagnosis when they do have their appointment. Between appointments, the app can also be used to track whether or not their treatment has caused a change in their behavior.

Big Black Dog uses sensory data to gather information about the individual. For example, sound levels, brightness of surroundings, whether the screen is on or not, and geotagged data are all types of information that the app will gather.

It will also look at social interactions, such as how often the individual makes phone calls or converses with people through text messages. The combination of all this data can result in some trends that will show a picture of the person’s health and be a predictor of depression. Two behaviors with which depression is most highly correlated are social isolation and a poor sleep schedule.

“So you probably see there are several trends that are going on here,” Hong noted. “One is that sensors and devices are becoming much cheaper so now we can capture more data. Another trend is that we can capture a lot of data about our health outside of hospitals and outside of clinics more than we could before. These are two trends that are just going to keep on continuing.”

Besides spotting depression in a target audience such as returning soldiers, Hong and Zimmerman also conduct other research that uses the concept of the quantified self. For example, Zimmerman worked with associate professor of HCII Anind K. Dey on an application for busy parents. The application can learn the pickup and drop-off routines of parents for their kids’ events so that if a parent forgets to be somewhere at a certain time, they will be sent a reminder notification.

Similarly, Hong worked with professor in the Institute for Software Research Norman Sadeh on a project called Livehoods, which uses Foursquare check-ins and other geotagged data to create a map that identifies regions in less of a geographical way and more of a cultural way.

For example, data shows that even though Shadyside is known as one region, it is actually broken down into a more residential side and a more commercial side where there are many restaurants and stores.