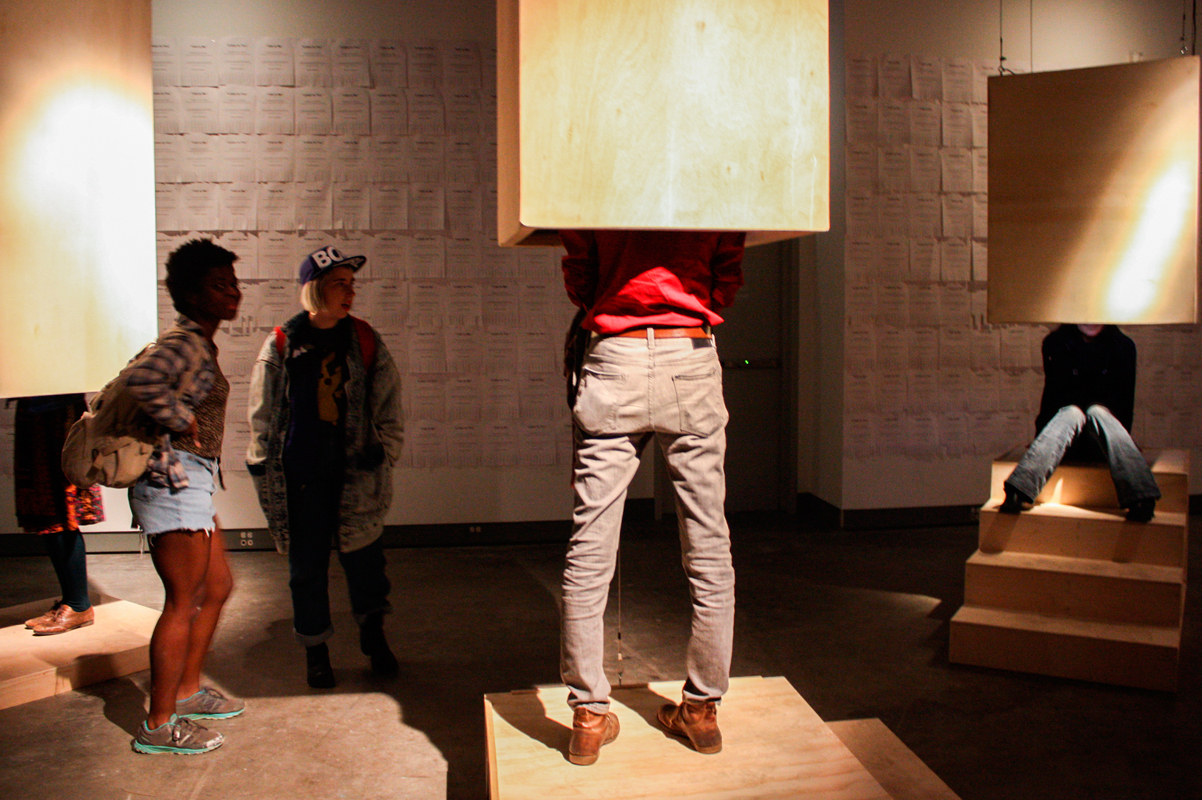 One aspect of Yun Mi Her's segment of *Lossless* asked attendees to view video interviews by sticking their heads in rectangular prisms made of balsa wood. (credit: Maryyann Landlord/Comics Editor) 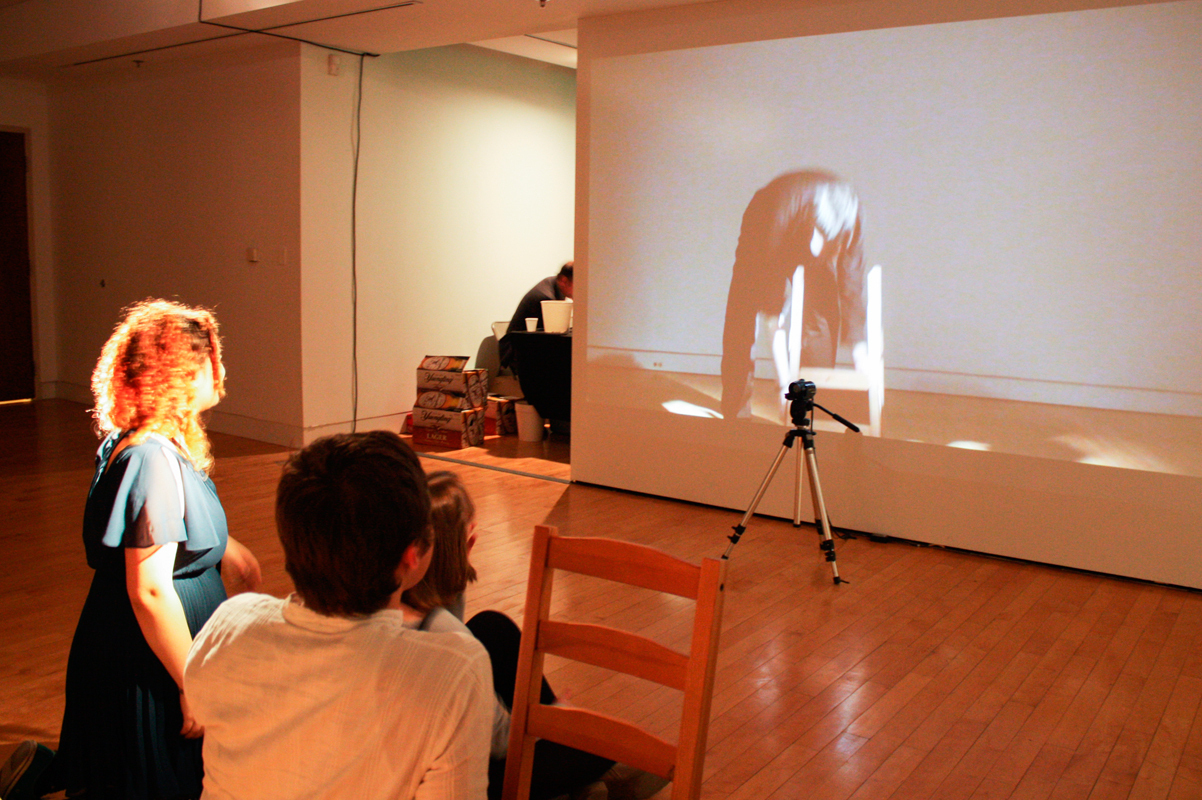 Attendees are given the chance to participate in the art in a portion of Yun Mi Her’s segment of Lossless. Sitting in front of a camera, participants can see their image projected onto a screen on the other side of the gallery. (credit: Maryyann Landlord/Comics Editor) 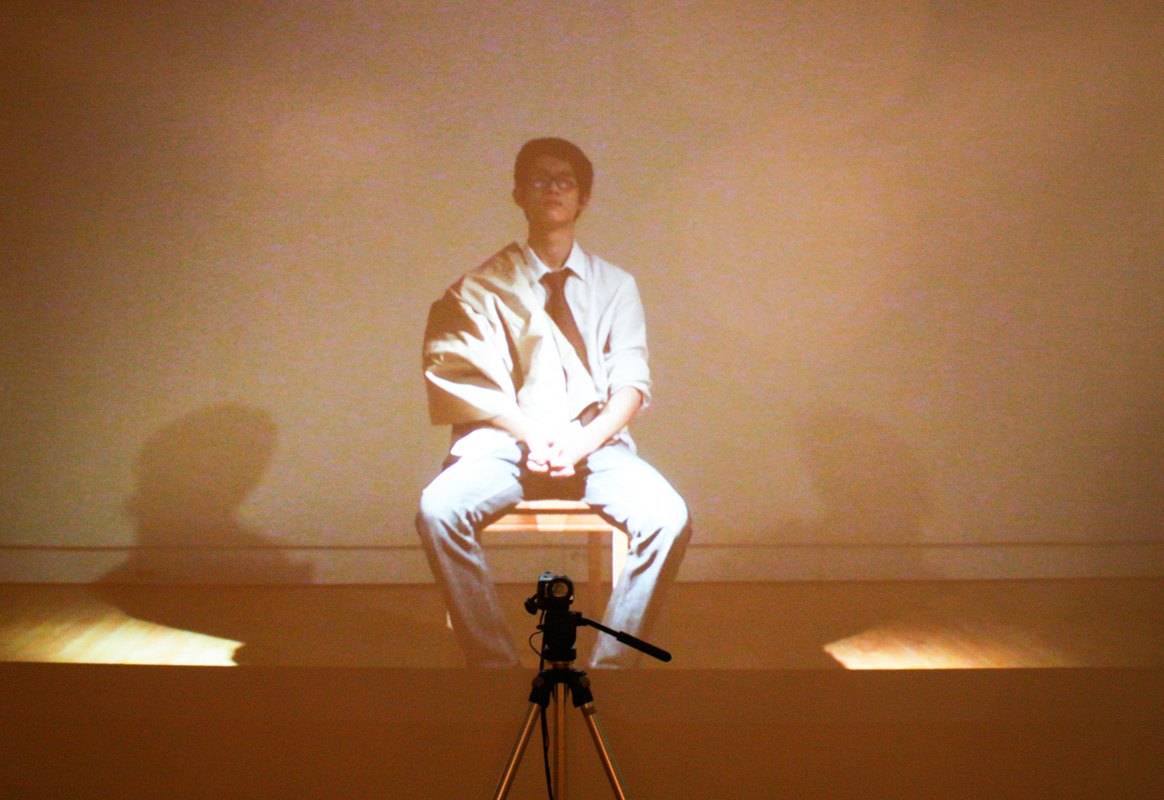 Attendees are given the chance to participate in the art in a portion of Yun Mi Her’s segment of Lossless. Sitting in front of a camera, participants can see their image projected onto a screen on the other side of the gallery. (credit: Maryyann Landlord/Comics Editor)

The exhibit represents a culmination of the artists’ work as fine arts students — yet each artist went further by “exploring new territory,” according to School of Art head John Carson in a Miller Gallery press release.

For each of the three artists, this new territory took them in different directions, leading to a cohesive, yet pleasantly diverse final exhibition.

Bajandas achieved this effect by creating a solution of copper sulfate crystals in water. As the water evaporates, the solution will continually crystallize over a three-month period, forming the sugary texture on the surface of the canvas.

As the solution crystallizes, the copper oxidizes. As a result, the canvas is discolored in places, showing runny brown and green splotches overtop the original vibrant aqua base.

Once viewers look past the looming canvas, though, they’ll notice a persistent, monotone hum that pervades the space. No, it isn’t the air conditioning; it’s part of the art itself. Bajandas positioned a small computer at the ceiling of the room that registers the darkness of the discolored canvas and emanates a noise accordingly.

At first, the hum is loud and somewhat bothersome, but eventually it blends into the natural sound scape of the space. Slowly, it takes on a hypnotic effect.

“It’s supposed to be a very calm, meditative piece,” Bajandas said.
Since the oxidation is a three-month process, both the colorscape and the soundscape will evolve over the course of the exhibition — and Bajandas wants viewers to engage with this feature of the piece.

“The reaction happens so slowly, and it’s supposed to push the time scale outside the human attention span,” Bajandas explained. “It has to be something you come back to and look at again and sort of sit with.”

The crowded, chatty atmosphere of opening night might not have been conducive to the contemplative environment Bajandas was hoping for the piece. But it’s easy to imagine revisiting the gallery on a quieter day: approaching the vast, larger-than-life canvas, listening to the whirs and hums of the changing soundscape, and looking for hidden patterns in the landscape of crystals.

By contrast to the soothing hum of Bajandas’s piece, it’s quite the opposite experience walking into the center backroom on the second floor. There, projected video clips jump from wall to wall in brief flashes, forcing viewers to whirl around at every sudden change.

Some of these snapshots depict peaceful, wintry scenes: close shots of withering, frost-covered sunflowers and sunflower seeds falling in slow motion onto snowy soil. Others show workers pounding into the earth, lowering a mysterious gold-painted casket into a grave.

And all the while, it’s hard to know where to look next, causing viewers to crane their necks to look around the room from every angle.

The experience is disorienting — but that’s the point, according to artist Cohen. Her thesis project, “Between a Stone and a Shrine,” focuses on current efforts in nearby Braddock, Pa., to bring life back to a fading community. The choppy, whirlwind presentation of the videos plays a role in the narrative Cohen hopes to tell about the Braddock project.

One scene shows a bulldozer eating away at a demolished house, digging into the house’s innards while what remains of the siding of the house flops lifelessly.

“When a building is demolished, everything is sort of fragmented,” Cohen explained. “Our sense of environment — our environment that we’re used to — is totally disoriented.”

That’s the driving motif behind the jarring presentation of the video — the fragmented nature of what’s happening in Braddock. As Cohen describes it, she’s “trying to capture a narrative through multiple screens.”

Ultimately, Cohen hopes to provoke viewers to “look at abandoned spaces with a different perspective.” In finding her place as an artist amid the efforts in Braddock, Cohen wants to turn gentrification into revitalization. As the artist put it, “I wanted to take a space and turn it into a place” — a place with identity, character, and humanity.

Also on the second floor, Her’s work is a tonal marriage of her colleagues’ pieces. Like Cohen, Her’s work relies on video: she captures her subjects with hypnotic, emotional interviews.

Viewers can watch Her’s interviews by clambering into hollow rectangular prisms made of balsa wood: They’re suspended vertically from the ceiling by taut strings, at just the right height for viewers to duck underneath.

Once inside these prisms, viewers are secluded from the rest of the exhibit, left to gaze at the screen before them. On these screens, video interviews play in loops, portraying a variety of subjects discussing everything from their childhoods to the definition of a successful life. The camera captures the subjects head-on, thought it will often zoom in on subjects’ eyes, mouths, and hands.

Like Cohen’s videos, Her’s work is fragmented and puzzling: It jumps between the moments in an interview, rather than playing them chronologically, forcing viewers to paint a narrative out of snapshots. But at the same time, the effect is calming and thought provoking: Viewers wander at their own pace from one prism to the next, moving from story to story.

Her’s work continues upstairs — and there, the mood is different. Instead of merely watching images on a screen, here viewers get to take part in them. In two enclosed rooms on opposite sides of the floor, a lone chair stands in the center of each of the spaces, facing a video camera. Viewers take turns sitting in this chair, looking and waving into the camera.

The trick to the piece lies in the projected image on a wall in each room — a live video recording of the chair in the opposite room, and any of that chair’s inhabitants. Every blink, wave, and move by each subject in the chair is instantly broadcast on the opposite side of the gallery floor.

The setup might not seem so out of the ordinary, but it’s somewhat unsettling. Imagine a Skype session without the little box in the upper corner reflecting your own face back at you.“They can see each other,” Her explained, “but they can’t see themselves.”

Although you might not guess it, according to Her, the third-floor installation is a symbolic realization of the videos downstairs. Her didn’t elaborate on what those symbols were, but it’s possible to imagine that the interview subjects and the gallery visitors have something in common: Both are facing cameras, unable to see themselves yet visible to others. Both find themselves in vulnerable situations, shedding some layer of self-consciousness in the process and showing their unfiltered selves to an unseen audience.

Lossless isn’t an exhibit for the visitor who’s in a rush. At face value, Cohen’s work might seem like a mismatch of beautifully captured, but random snapshots. Without context, viewers might fail to find meaning in the colorful crystals of Bajandas’ oxidizing canvas. If you plan to make the trip, take the time to wander the space; watch the interviews; read the placards on the walls.