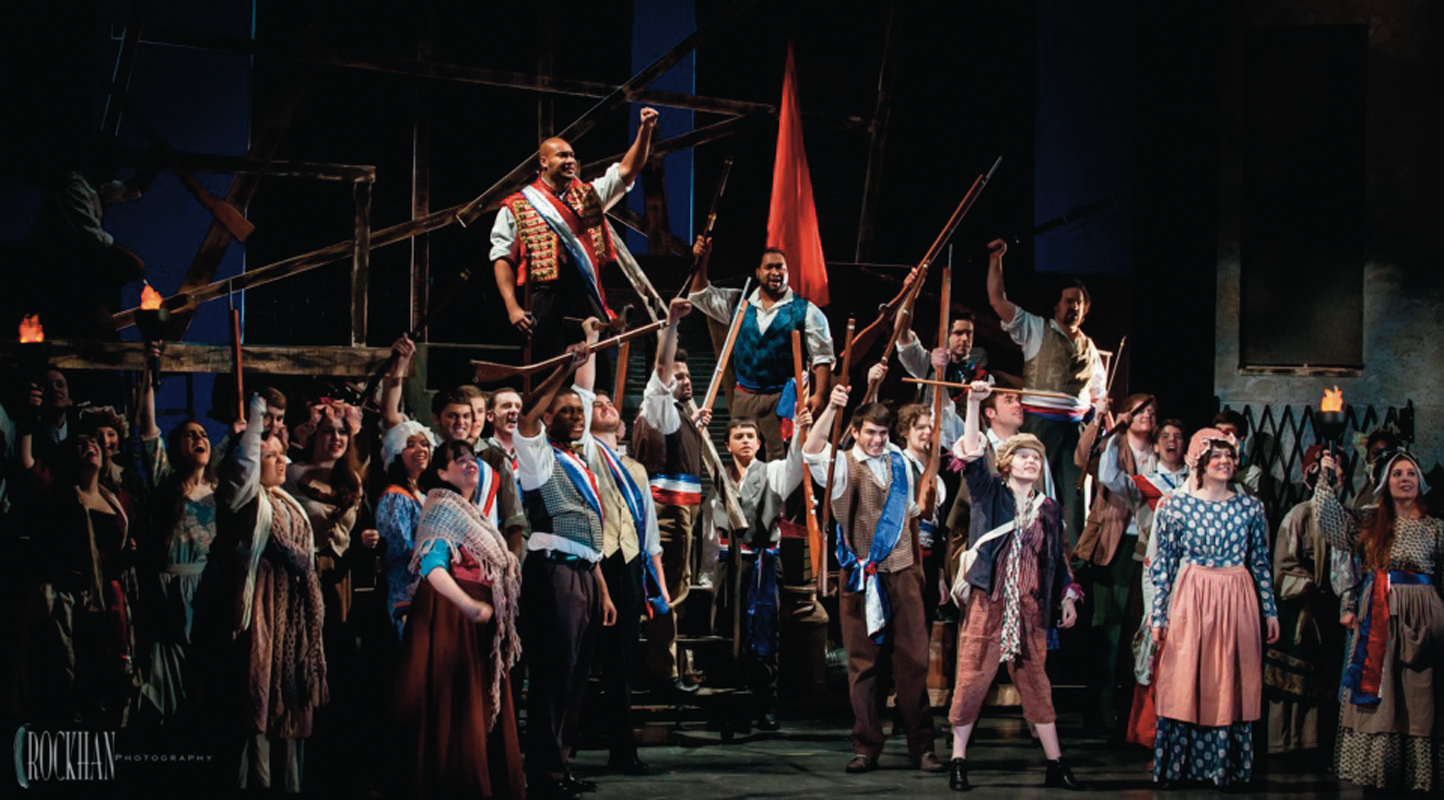 The lower classes of France rise up to have their voices finally heard in *Les Miserables,* which tells a stirring tale of redemption amidst the political turmoil of the failed June Rebellion of 1832. (credit: Courtesy of Pittsburgh Musical Theatre)

Do you hear the people sing? In the Pittsburgh Musical Theater’s production of Les Misérables, the answer is a resounding “yes!” The diverse cast of this classic musical put on a spectacular show that would put the stars of the recent movie production to shame.

For those unfamiliar with the story, Les Misérables is set in France during the failed 1832 June Rebellion and follows the story of Jean Valjean (Peter Matthew Smith) who, after serving 19 years in prison for stealing a loaf of bread, creates a new identity and a new life for himself. Years later, he encounters Fantine (Emily Lynne Miller), a dying woman using any means necessary to provide for her child, Cosette (Kate Toole), and he agrees to take care of the child and raise her as his own. Meanwhile, Javert (Brady Patsy), a policeman with a strict moral code, is after Valjean for violating his parole. And the whole time all of these characters are interacting, the people of France are organizing a revolution.

While it may seem redundant to cite the music as the best part of the musical, the vocals are absolutely what stand out most about this performance. There are very few lines of spoken dialogue in the show; the entire story is told in song. The cast members not only provide the entertainment of beautiful, strong voices, but also convey the characters’ personalities and emotional struggles through their songs. The stars’ voices are especially mind-blowing.

Another remarkable aspect of this production is the cast itself. Performers range from children studying at performing arts academies, to college students from several different universities, to Broadway performers, to professional film actors, and even an award-winning cartoonist. If diversity is indeed the spice of life, perhaps the wide range of backgrounds from the different cast members is part of what makes this performance so fantastic.

One particular star in this production is Tim Hartman, who plays the sticky-fingered, drunken innkeeper, Master Thenardier. Hartman is a native Pittsburgher and is known for his work on Broadway. He has also made his appearance on the silver screen in films including The Silence of the Lambs, The Mothman Prophecies, The Piano Lesson, and the highly anticipated adaptation of the John Green novel that was filmed right in Pittsburgh’s backyard, The Fault in Our Stars. Hartman’s expressive face and tall, lanky figure definitely lend themselves to his comedic role. In an otherwise quite somber story, Hartman and his counterpart, Victoria English, who plays his equally nasty wife, offer moments of comedic relief.

Among the cast members are two Tartans: Emily Carr and Donovan Smith. Smith, a senior vocal performance major, lends his beautiful, operatic vocals to the character Enjorlas, one of the leaders of the revolution. Carr, a sophomore vocal performance major, brings life and passion to her role as a female factory worker. She is also the understudy for Fantine.

When it comes to vocals, however, there are four particularly outstanding performances: those of Peter Matthew Smith, Patsy, Victoria Buchtan, and David Toole.

Smith (Valjean), Toole (Marius), and Patsy (Javert) are all professionals in the creative arts and entertainment industry. Smith has performed on Broadway and worked with the Pittsburgh CLO and Pittsburgh Musical Theater in numerous productions. His vocal range is an outstanding portrayal of Valjean that even rivals that of Hugh Jackman.

Toole also has many productions with the Pittsburgh Musical Theater and Pittsburgh CLO under his belt. His voice rallies the people of France into revolution in one scene and in the next declares his love for Cosette, who, interestingly, was played by his real-life wife Kate Toole. His voice is simply beautiful.

Patsy offers a stark contrast to the voices of both Smith and Toole with his deep, booming vocals. He has more of a hand in the future generations of performers. He is a creative arts administrator at the Propel PITCAIRN charter school in Monroeville and a performing arts teacher at the Richard E. Rauh Conservatory for the performing arts.

Buchtan (Eponine), on the other hand, is a sophomore at Robert Morris University double majoring in communication and theater. Her voice can hardly be described as anything less than perfect — clear, beautiful, and deeply connected to the emotions of her character. Her rendering of unrequited love evokes sympathy and has the ability to even draw tears from the audience.

Of course, the performance is not without its faults. There was an obvious case of opening-night jitters among many of the cast members on March 27 — some forgot words or even entire verses to songs. While die-hard Les Mis fans would have definitely noticed, those not particularly familiar with the musical probably would not have, and still would have enjoyed the musical despite the flaws.

Les Misérables runs at the Byham Theater through April 6.