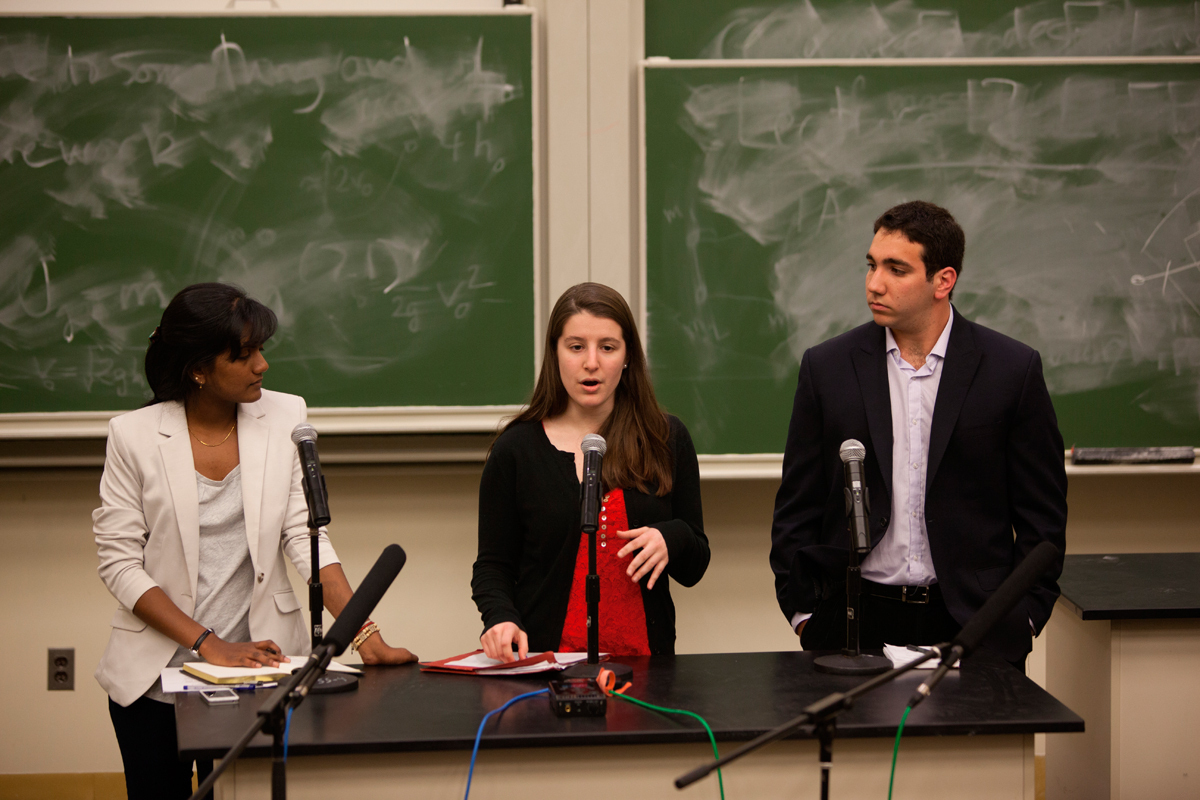 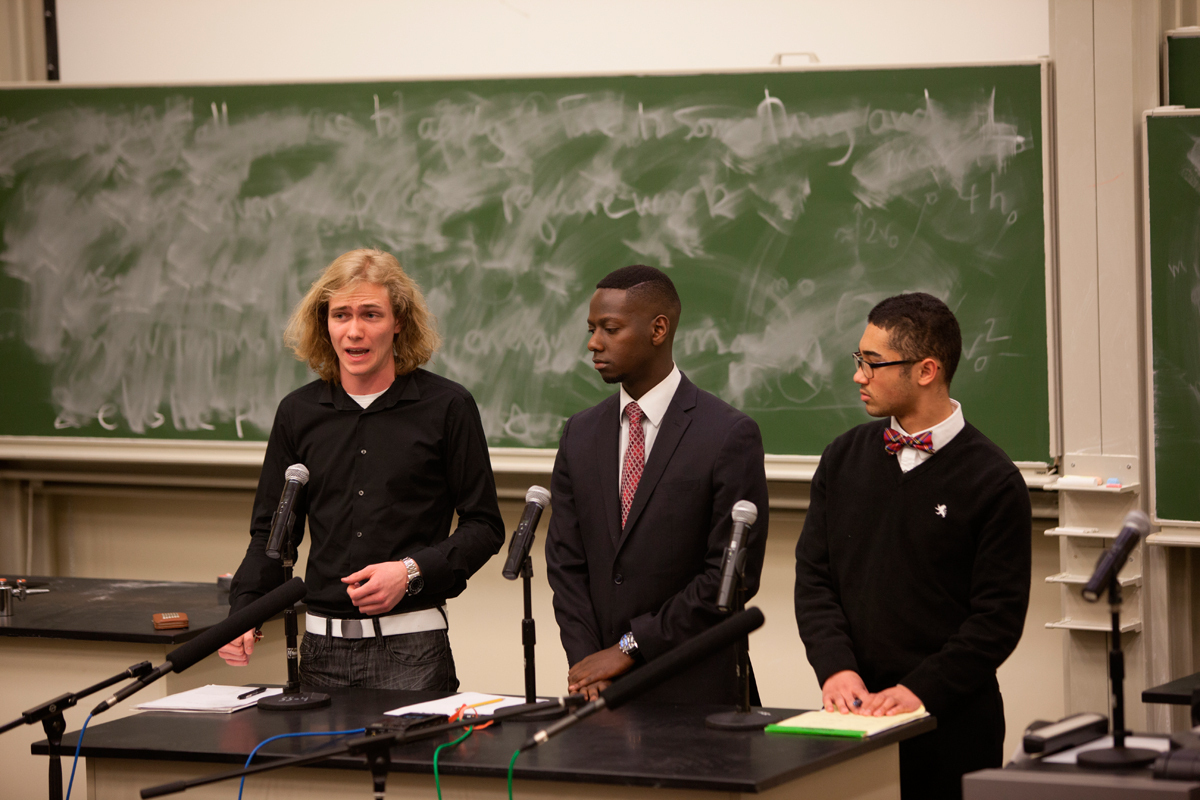 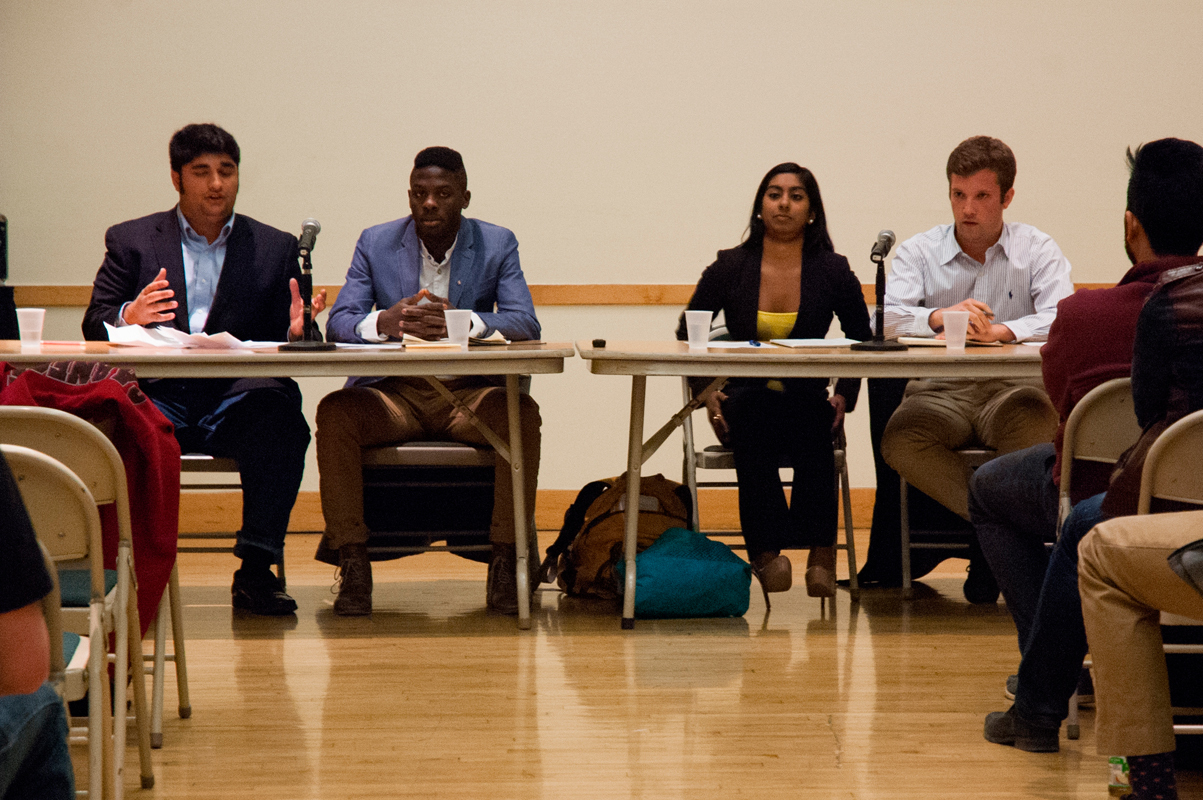 The other ticket is comprised of junior chemistry major Dominic Akerele (for SBP) and junior electrical and computer engineering major Rohan Saigal (for SBVP). In their platform, they focus on increasing student engagement, improving the campus printing system, improving students’ health, and creating a campus homepage for students with a link to Blackboard and information about extracurricular activities occurring around campus.

In his opening statement, Akerele called for greater support for the student body, encouraging a less stressful campus culture and better faculty-student relationships. Saigal summarized their goals, saying, “It’s our job as a student government to help facilitate and make everyday life better and distract from this academic stress.”

Akerele continued his remarks, stating, “We would like to highlight our student body.” He added, “This is supposed to be the best four years of your life; five if you’re an archie.”

Glasner framed his candidacy in terms of improving student representation and participation in student government: “I want to give students a chance to represent themselves.”

Glasner dismissed candidates’ platforms for building school spirit in previous years as “pep rallies,” adding that he and Ray had been in student government for all three years of their time at Carnegie Mellon. He went on to say, “We actually have a plan of attack.”

Akerele and Saigal want to create a spirit week in the fall, which would culminate in a day off for students. Saigal explained, “Carnival is only two to four days out of the year; we want to have a lot of events that the campus can get excited about.” He also said that he would push for greater support of athletic events in student culture, stating that he wished the atmosphere of Carnegie Mellon football games would be akin to the atmosphere at Ohio State University.

In response to an audience question about the feasibility of obtaining a day off from classes in the fall, Akerele responded, “We haven’t really gone through any of the specific details.”

“We want students to be proud of where we go to school,” Akerele continued, describing the “Hump Day Hangouts” initiative in their platform where “Every Wednesday we’d hand out free, healthy snacks.”

Glasner agreed that Carnegie Mellon school spirit is “definitely on the weaker side,” but portrayed the lack of sports and football excitement in a more positive light. Students who come to Carnegie Mellon may value these traits, he said. In terms of building spirit, Glasner said, “We can do more for juniors and sophomores to give them more specific events,” noting that there are a multitude of first-year and senior-oriented events, but very few targeting students in their second and third years.

Glasner also spoke about improving the dining system on campus. Glasner wishes to alter the cost structure of meal plans so that upperclassmen are incentivized to keep meal plans. “Dining is something I’m really passionate about at this school,” he said, recalling a meeting he had with Vice President for Campus Affairs Michael Murphy, who did not believe that a block could cost over nine dollars on some meal plans. Glasner recalled doing the math in front of Murphy to prove his point.

In their platform, Glasner and Ray describe an initiative for the creation of blocks that are more desirable to upperclassmen. These block could come without a side or beverage, Glasner said during the debate.

During the response period, Saigal countered their plan by saying that meal blocks are not healthy and that “we want to take the initiative to allocate the budget to free food,” namely healthy food.

Saigal said, “I’ve heard over a hundred complaints … we need to fix Skibo Gym.” Akerele and Saigal want to allocate money for the improvement of athletic facilities to improve student motivation to use the gyms.

Akerele also spoke of their desire to get new university printers at the Intersection housing cluster and off-campus housing locations, such as Webster Hall and Fairfax Apartments. “It would be good to have another printing system in the UC,” he added.

Junior information systems major and Joint Funding Committee (JFC) representative Andrew Schwartz questioned the feasibility of the printer purchases during the audience question period, saying, “Student body presidents are usually given between five and six thousand dollars for the year.” He continued, “a lot of these printers cost between ten and twelve thousand dollars.” Schwartz mentioned that student government recently installed a new printer for the university. The printer had to be rented to make it affordable, according to Schwartz. He also also mentioned that the budget for food would likely be $3,000 to $4,000, which would limit free food initiatives.

Glasner also proposed changes in the university’s underage drinking policy, including a process for internal citations and discipline, in a fashion similar to that adopted by all eight Ivy League schools.

Glasner explained that current Carnegie Mellon policy is to report underage drinking to the police, after which cited students must appear before a Pennsylvania magistrate and receive a citation from the state.

Glasner acknowledged the potential difficulties of implementing these reforms, saying, “The roadblocks are definitely there.” He noted that he would begin the process with a student referendum or petition.

Saigal responded to the proposed reform: “When it comes to alcohol … our main concern should be safety,” adding, “the real world doesn’t handle issues like this so lightly.”

Glasner responded to people’s ability to clear their records through the court process by recalling his experiences as an RA and CA, saying “almost universally, [I’ve heard] from students that they don’t grow from the process of going to court, and what they do grow from is a meeting with me or their housefellow.”

He later added, “when you send students to court, they get angry … they don’t learn why they shouldn’t be drinking in a dorm room.” Glasner concluded by saying, “The informal process isn’t there, compared to what our peer universities have.”

Ray echoed this sentiment, saying that “college is supposed to be a stepping stone into the real world.”

Both pairs of candidates also discussed communication between President Suresh and the campus community. Akerele and Saigal said “We’ve been pushing for two speaking sessions, one in the spring and one in the fall.” Regarding the president’s visibility, Glasner responded, “I think he did a very good job this year.” He also said, “I think his reach out to campus could be greater, but I’d attribute that to it being his first year.”

Wednesday’s debates for the SBVPF and SBVPO, held in Doherty 2210, were sparsely attended. The first debate of the evening for the position of SBVPF was among three candidates: junior chemical engineering major Elena Karras, junior economics major Matthew Greenberg, and sophomore electrical and computer engineering major Divya Kothandapani.

Several questions concerned how the candidates would increase understanding among organization leaders regarding their group’s financial needs, how they would address the problem of organizations going over their allocated JFC budgets, and their thoughts on the current JFC budgeting process and whether they thought it could be improved.

In his answers, Greenberg stressed the various reforms he wishes to institute if elected to the position. “I’m trying to go out there and make significant changes as to how the JFC process works currently,” he said.
He plans to change the timetable by which JFC representatives are elected and to institute a key performance indicator (KPI) that would make appropriation of funding “completely objective,” according to Greenberg.

Karras and Kothandapani, who both already serve as Senators for their respective colleges and act as representatives for the JFC, expressed many similar ideas regarding what they would like to accomplish in the position.

Both candidates emphasized their desire to improve current policies and procedures within the JFC budgeting process, as well as to enhance transparency and communication between organizations and their JFC representatives.

Greenberg was asked to answer questions concerning his KPI proposal to objectively determine JFC funding based on the organization’s spending history and impact on campus, the particulars of which he said are still in development.

Many expressed concern over the KPI, particularly regarding its effectiveness and necessity. Senior chemistry major and current chair of Student Senate Lukas Ronner said to The Tartan, “I am critical of the KPI because I’ve never seen an objective way to determine an organization’s impact due to the diversity of organizations here on campus.”

Many of the questions posed to the candidates concerned the current recognition process for student organizations and its effectiveness, as well as the SBVPO’s role in running the Committee on Student Organizations (CoSO).

Drawing on his current involvement in CoSO, Michalak stressed the need for changes to the current recognition process. “I’ve seen many organizations come to me trying to get recognized, and they struggle. It’s a long process; it’s difficult; we have high standards for our organizations ... so I would like to make these expectations clear up front so that we can help organizations get through this process very quickly.”

Hadick pointed out that he would like the SBVPO to also serve as a resource for students in discovering organizations that would be right for them. “Students want to find their niche, but they don’t know how to do it. They don’t know what organizations are out there or where they’ll fit in ... there are a lot of times during office hours where students should be able to come in and talk to me about their interests and I can inform of the clubs that are on campus to fulfill their interests.”

Fifth year decision science and psychology double major and current SBVPO Corinne Rockoff commented to The Tartan, “When I took office, I found the biggest hindrance to be my lack of experience ... one candidate having an abundance of experience should be a really important factor for voters to consider.”

Voting closes today at 6 p.m. Polling stations are available today from 12–1:30 p.m. and 5–6 p.m. in the UC Kirr Commons. Voters can also vote online at http://www.cmu.edu/studentvote.