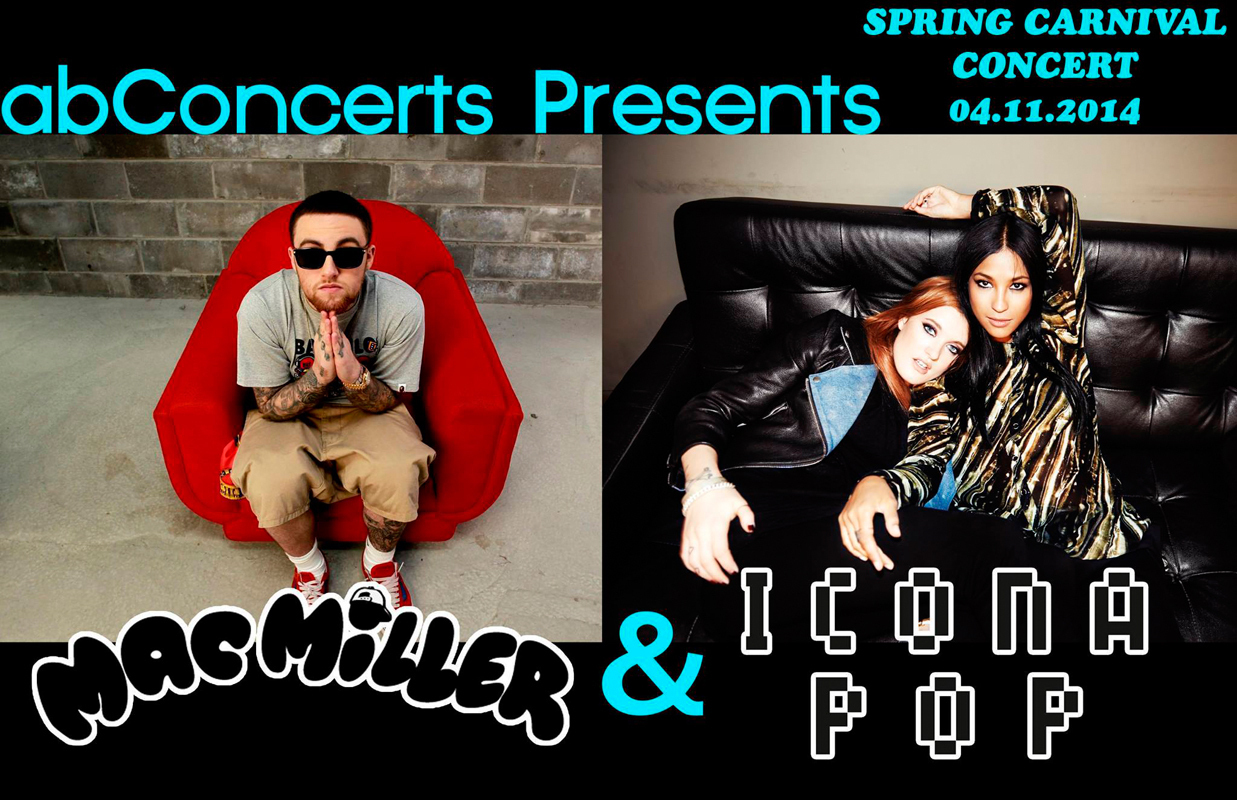 After much anticipation, AB Concerts announced on Wednesday at 11:59 p.m. this year’s Spring Carnival concert performers: Icona Pop and Mac Miller. Icona Pop is a Swedish DJ duo with an emphasis on electro house and indie pop. The duo gained attention in the United States for their song “I Love It” in 2012. Mac Miller, a rapper and Pittsburgh native, is most popular for his song “Party on Fifth Ave.”

AB Concerts co-chairs junior computer science major Rebecca Paren and senior human-computer interaction and business administration double major Ronny Ho explained their selection, saying that because it’s so difficult to please the campus as whole, they liked the idea of selecting two distinct artists to appeal to a wider audience.

The selection process started with a collective brainstorming session, Ho said. “Literally on a chalk board — everyone just name-drops artists and bands,” Ho described.

From there, it came down to questions of scheduling, cost, and campus appeal. Ho and Paren noted that it can be difficult to get top artists for Spring Carnival, because it usually coincides with the Coachella Valley Music and Arts Festival in California. The members of AB Concerts also usually avoid country music, because they doubt that it will appeal to a large segment of the student body.

Beyond that, Paren and Ho said, the co-chairs are open to anything, although the university prefers that they stay away from artists that encourage marijuana use.

Paren and Ho are excited for Mac Miller; they both liked the idea of featuring an artist from the Pittsburgh area for the 100th Spring Carnival. They are also excited to host an up-and-coming foreign group like Icona Pop.

The student body’s reaction is mixed. Icona Pop has generally garnered more excitement than Mac Miller. First-year mechanical engineering and engineering and public policy double major TJ Murray explained, “I am excited for Icona Pop because they take me back to the glory days — and nights — summer.”

Saumya Dalal, a junior computer science major, said that this year’s artists are a marked improvement over previous years. “I think it’s a good choice,” she said. “It’s definitely better than last year’s concert, or the year before.”

“The first thing I thought when I found out Mac Miller [was coming] was ‘LOL,’ and then how he seems like the kind of artist that wouldn’t want to perform at CMU,” said first-year fine arts major Joni Sullivan.

The co-chairs explained that the AB Concerts board always expects mixed feelings about their decisions.

“We want the student body to understand we aren’t choosing people we love.” Paren said, “Our musical interests do not influence who we pick. We want to do what’s best for the campus with the money and timing we have.”

The concert will take place on Friday, April 11 at 8 p.m. on the Mall or, if there are bad weather conditions, in Wiegand Gymnasium.

The concert on the Mall will be open to the public. Students will not be required to get tickets unless the concert is moved indoors, where space is limited.