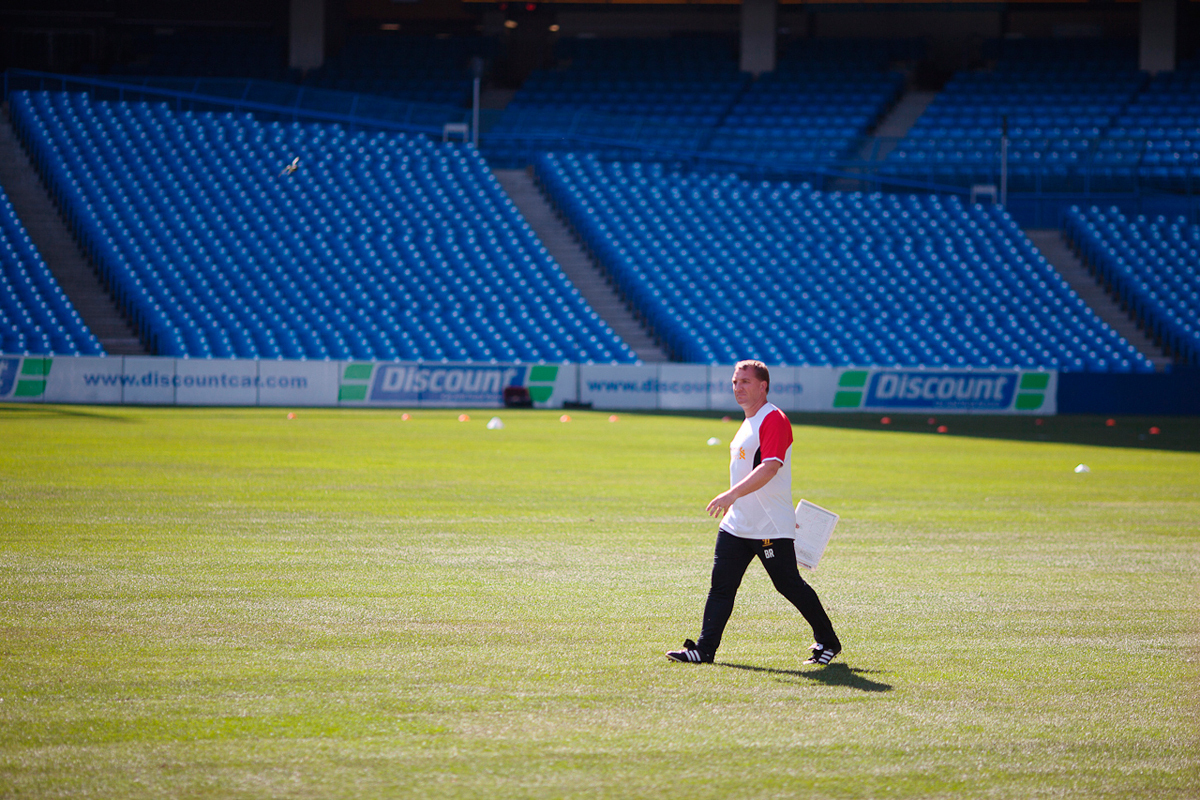 In two seasons with Liverpool F.C., manager Brendan Rodgers has made numerous changes to improve the competitiveness of the club. (credit: Courtesy of Bernard Chan via Flickr)

In one of the most competitive Premier League seasons in recent memory, Liverpool made a season-defining statement last weekend with a 5—1 thrashing of league leaders Arsenal. Over recent seasons, Liverpool has been much maligned for its thin squad, mid-table talent, and inability to finish higher than Merseyside neighbors Everton, let alone in the top four. Even though Liverpool finished in seventh place last season, the team’s progress to fourth and potential title contenders is not as abrupt as it seems. This seamless transition to a top-level team must be credited to one man only — manager Brendan Rodgers.

Rodgers started out at as the youth team manager at Chelsea under then-manager Jose Mourinho, staying in that position under Avram Grant and Luiz Felipe Scolari. He moved on to coach Watford in the championship; after an impressive stint there, he attracted the attention of promotion hopefuls Reading. However, he was sacked from the club after a poor run of form and took over at Swansea City.

It was at Swansea City that he gained countrywide fame as he guided the Welsh club to their first ever promotion to the Premier League, finishing a solid 11th in his first full season in the top flight. Swansea City’s slick passing style was compared to the Spanish tiki-taka and won over neutrals. Top clubs were circling, and when Kenny Dalglish was sacked from Liverpool, Rodgers was chosen as the new manager.

He was handed a Liverpool team with Andy Carroll and Luis Suárez as the only reliable strikers, a barren midfield, and an underwhelming defense. Rodgers attempted to make some changes in the transfer market by bringing in familiar faces — striker Fabio Borini, who played under him at Chelsea and Swansea City, as well as Joe Allen, Swansea City’s standout midfielder from the previous season. Rodgers was also essential in the development of the club’s then 17-year-old talented winger, Raheem Sterling, who is now a regular in the side.

The first season under Rodgers was a disappointment, however; a lack of firepower meant Liverpool was slow out of the blocks and stuck in the lower end of the table for the majority of the first half of the season. The January signings of midfielder Philippe Coutinho and striker Daniel Sturridge reinvigorated Liverpool. The team finished in a respectable seventh position — an improvement over the previous season — and played some wonderful soccer in the second half of the season. The targets for the next season were to qualify for the UEFA Champions League and keep Suárez at the club.

It’s not the mere fact that Liverpool has kept up with its targets; it’s the way the team did it that is impressive. Carroll was sold in the summer, and forwards Iago Aspas and Luis Alberto were purchased to provide backup for Sturridge and Suárez. Underperforming winger Stewart Downing was sold to West Ham United, and Sterling was given a more prominent and regular role in the side. Club legend and defender Jaime Carragher, an important part of the first team, retired and new center backs Mamadou Sakho, Tiago Ilori, and Kolo Touré were brought in. The inconsistent goalkeeper Pepe Reina was loaned out to Napoli, with Simon Mignolet brought in to replace him. Fullback Aly Cissokho and forward Victor Moses were brought in on loan from Valencia and Chelsea, respectively, to provide much-needed squad depth.

Rodgers had identified his targets, done his business early, and made sure integral new players had a preseason to settle in. The Suárez transfer saga was handled admirably well, as Rodgers refused to sell his star man despite a bid of 40 million pounds ($67 million) from Arsenal. Suárez’s antics and damaging comments to the media about the club were taken seriously, and he was asked to train alone unless there was a public apology, a request to which Suárez obliged. It showed an impressive increase in maturity from a manager who two years earlier was staving off relegation from the Championship. Rodgers had clearly rectified his previous mistakes and learned from them.

Injuries have also not ravaged the squad this year like last season. Rodgers has seemingly always had a backup plan in case one of his men went down. Midfielder Jordan Henderson has finally emerged and is beginning to justify the hefty 20 million pounds ($33 million) paid for him. With a capable strike partner, Suárez has been on a tear this season and is currently the highest scorer in any of Europe’s top leagues this season. Together, Suárez and Sturridge have scored a combined 39 goals and are the league’s top two scorers. Liverpool’s offense has been phenomenal, with Coutinho and Sterling showing impressive form and midfielder Steven Gerrard showing no signs of aging. The club has scored 66 goals this season, only two behind league leader Manchester City. Rodgers has made Liverpool reach new heights in a style all his own.

However, what’s most striking about Rodgers this season is not his transfer acumen or his playing style: Rodgers’s tactical innovation has never been more apparent. With Suárez suspended and Coutinho injured early in the season, Rodgers was able to play a simple 4—3—3 with Sterling and Aspas on the wings led by Sturridge and Gerrard, defensive midfielder Lucas Leiva, and Henderson in midfield. The play was promising, but the offense was struggling. There was also the issue of providing five center backs enough playing time to judge them and their potential partnerships with only two places up for grabs. The return of Suárez and Coutinho caused more tactical conundrums in the forward positions.

The solution from Rodgers was unique and impressive. In response, Rodgers deployed a 3—4—1—2 formation with three center backs from the aforementioned three, center backs Martin Škrtel and Daniel Agger, a midfield of Gerrard and Lucas, two fullbacks doubling as wing backs, and Coutinho playing in the No. 10 role behind Suárez and Sturridge.

The results were phenomenal, as Liverpool absolutely decimated opponents. Suárez had a goal-scoring streak of two or more goals for three consecutive games.

The system had its flaws, and Rodgers was quick to realize them. In a loss against Arsenal in November, the midfield duo was outnumbered and overrun, which resulted in Arsenal dominating possession and dictating the game. The 3—4—1—2 formation was abandoned, but the ideology behind it remained. To play Coutinho, Suárez, and Sturridge at the same time would require having energetic midfielders to cover more ground and make up for the lack of defensive pressure exerted by the trio. Forced by an injury to Lucas, Rodgers decided to revert to a 4—4—2 and play Gerrard and Henderson in the middle while playing Coutinho and Sterling on the flanks. This combination has proved to be admirably successful for Liverpool as their attack continues to rack up goals.

Liverpool’s defense remains a major liability, though that is mainly because of injuries and a lack of discipline at both fullback positions. The return of the injured players should provide the team a major defensive boost. In the 5—1 win over Arsenal, Liverpool’s lightning-fast attacks, using the pace of all the attackers, caused havoc in the opposition defense and led to four goals in the opening 20 minutes. It was the most exhilarating play by any team this season — the result of well-rehearsed set pieces and team play.

It’s a testament to Rodgers’s ability as a manager that Liverpool has still won all of them and is now only four points off the top of the table.

Rodgers has displayed great tactical awareness, a deep transfer insight, and exemplary man management in his short career. He has also developed a sort of resilience in this Liverpool team that champions tend to have; the club recently came back from behind twice in a game at Fulham to score a goal in the 90th minute and win 3—2.

His team is adventurous, fearless and raring to go against any team in the league. Liverpool is on the rise again, and it has the Rodgers stamp all over it.