Player sexuality should be a non-issue 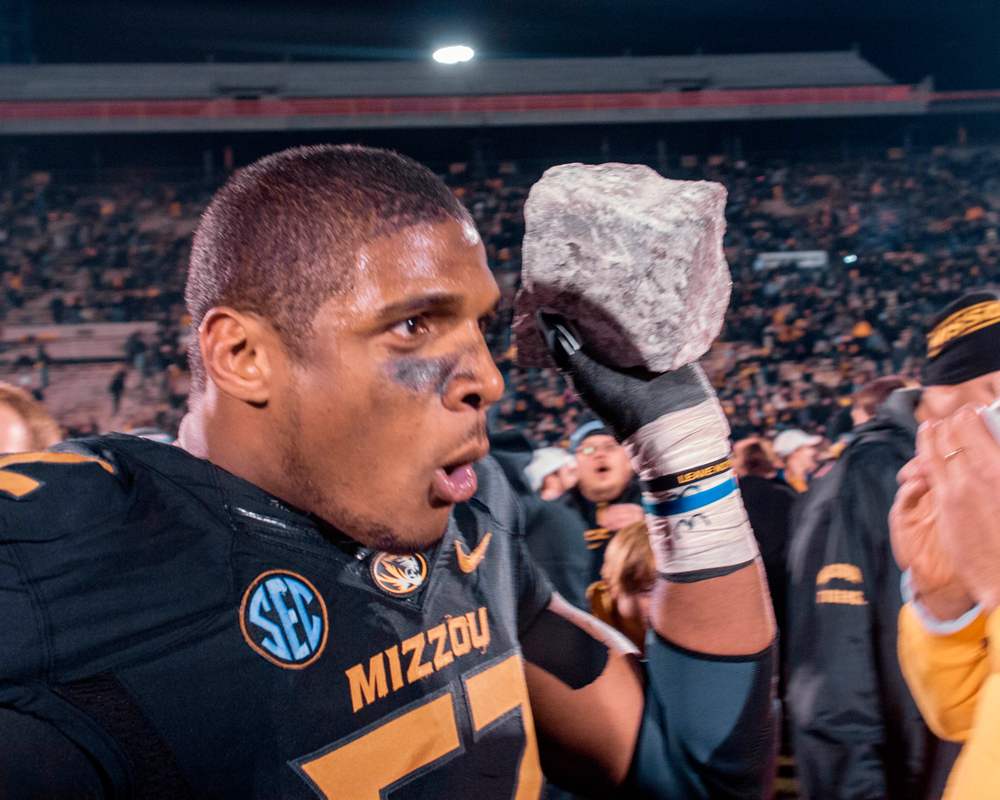 University of Missouri defensive end Michael Sam leaves the field after his final home game in November 2013. Sam, a prospect for the NFL draft, publicly came out as gay last week. (credit: Courtesy of Marcus Qwertyus via Wikimedia Commons)

Last Sunday, recent University of Missouri graduate Michael Sam openly admitted he was gay. Sam hadn’t really tried to hide his sexuality, coming out to many of his close friends last August. They had respected his privacy and let Sam come out in his own time.

Stories similar to Sam’s are happening all across the nation, as individuals gain the confidence to fully admit their sexuality and gender
preferences.

Given the rising acceptance of the LGBTQ community, these moments, while incredibly meaningful to the individual, barely make a ripple for society as a whole.
But one thing makes Sam’s story different. Sam is a prospect for the NFL.

Sam played defensive end for the Missouri Tigers until his graduation in December 2013. Before his coming-out announcement, he was projected to be a third- to fifth-round draft pick after being named top SEC Defensive Player of the Year and an All-American for his senior season with the Tigers.

Sam’s announcement took the media by storm, taking over sports coverage for the NFL in what was supposed to be one of its few media dead periods of the year.

Much of the discussion surrounded the idea that many teams would not draft Sam because of his sexuality, and the media circus that would surround the controversy.

Longtime NFL reporter Peter King interviewed four NFL front-office members anonymously to try and get a non-sugar-coated version of their thoughts for his website, The MMQB with Peter King. One of the general managers, when asked explicitly if he though Sam would get drafted, said “No.” He believed that the impact on the locker room would be far too great for a middling talent like Sam.

The very clear counter-argument to the manager’s argument is, why did the Tigers — with Sam openly coming out to the team before the start of this season — have debatably their best year in school history?

I’m not saying there might not be some rough patches in the NFL, but I find it comical to believe a team will have its entire season derailed because of one openly gay teammate in the locker room.

The real story here is the fact that there is a story. Sports is unequivocally tied to society, although previously it was seen as progressive.

The integration of baseball with Jackie Robinson back in 1947 is pointed to as one of the defining moments in the march to civil rights. But here we are, in 2014: New states are ratifying gay marriage and rights, and the Supreme Court overturned Proposition 8 to further push the LGBTQ community to equal rights and status. Meanwhile, the NFL — and sports in general — is holding us back.

I would like to think we have come far enough as a society for the sexual preferences of a sports figure to not define our level of acceptance as a community. Professional sports is supposedly one of the last arenas where success is based solely on talent, skill, and merit.

The NFL has shown an amazing ability to overlook a player’s past if he can still contribute on the field.

Michael Vick was welcomed back to the league with open arms after spending time in jail for dog fighting charges because he could still fool defenders with both his arm and his legs. Baltimore Ravens’ great Ray Lewis was celebrated by his team even after he was implicated in murder charges at the start of his career following Baltimore’s Super Bowl win back in 2001.

The fact that Sam — or his counterpart in the NBA, previous Washington Wizards center Jason Collins — might not get to play the sport he has dedicated his life to just because of who he chooses to love is abhorrent. Sam’s sexuality shouldn’t be a story, maybe a news blurb at most. Instead, hours of media coverage are being devoted to what should be a non-issue.

Change is hard. Societal inertia is one of the most powerful forces we face as a community. But this level of coverage and discussion is completely unwarranted.

Sam should be applauded for being the first, because he has chosen to challenge the system. He took the first step to making this a non-issue, but clearly the media and the NFL have shown us we have a long way to go.