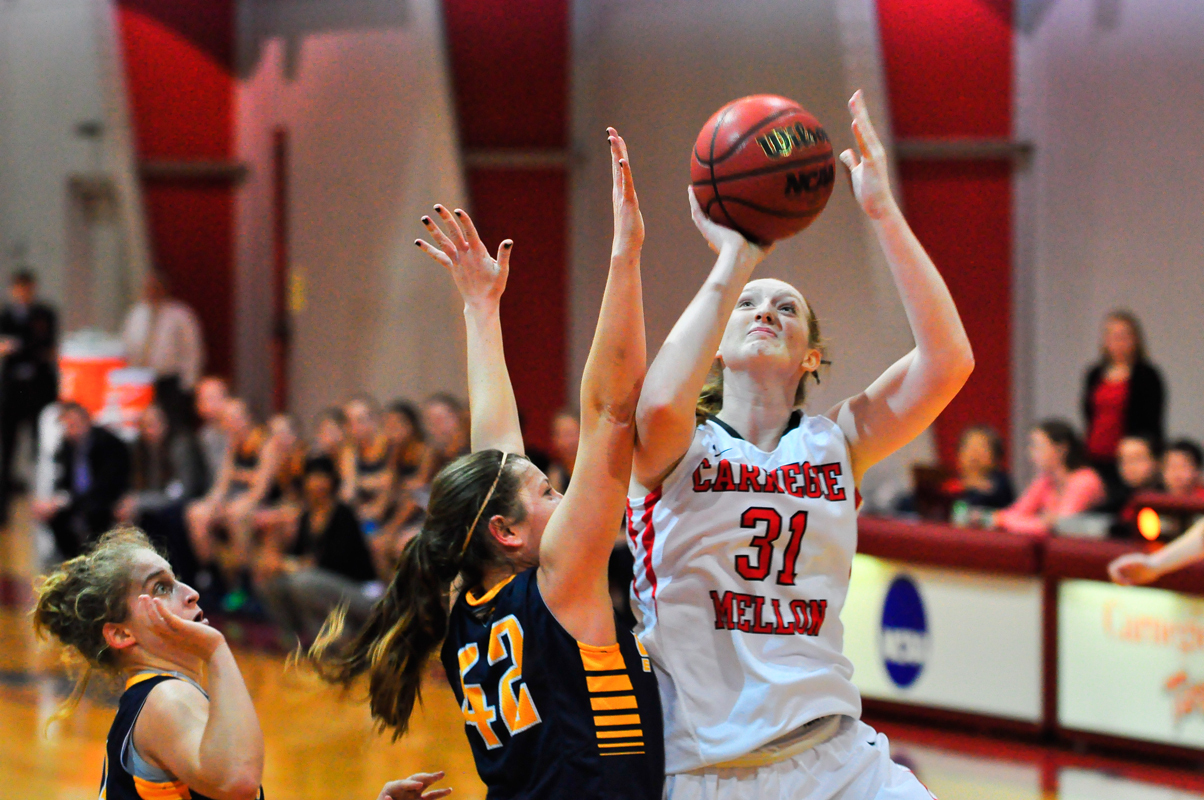 First-year Lisa Murphy goes up for a shot during Friday night’s game against Emory University in Skibo Gym. Murphy scored a team-leading 28 points during the game, but Emory pulled out the win by a final score of 87–76. (credit: Jason Chen/) 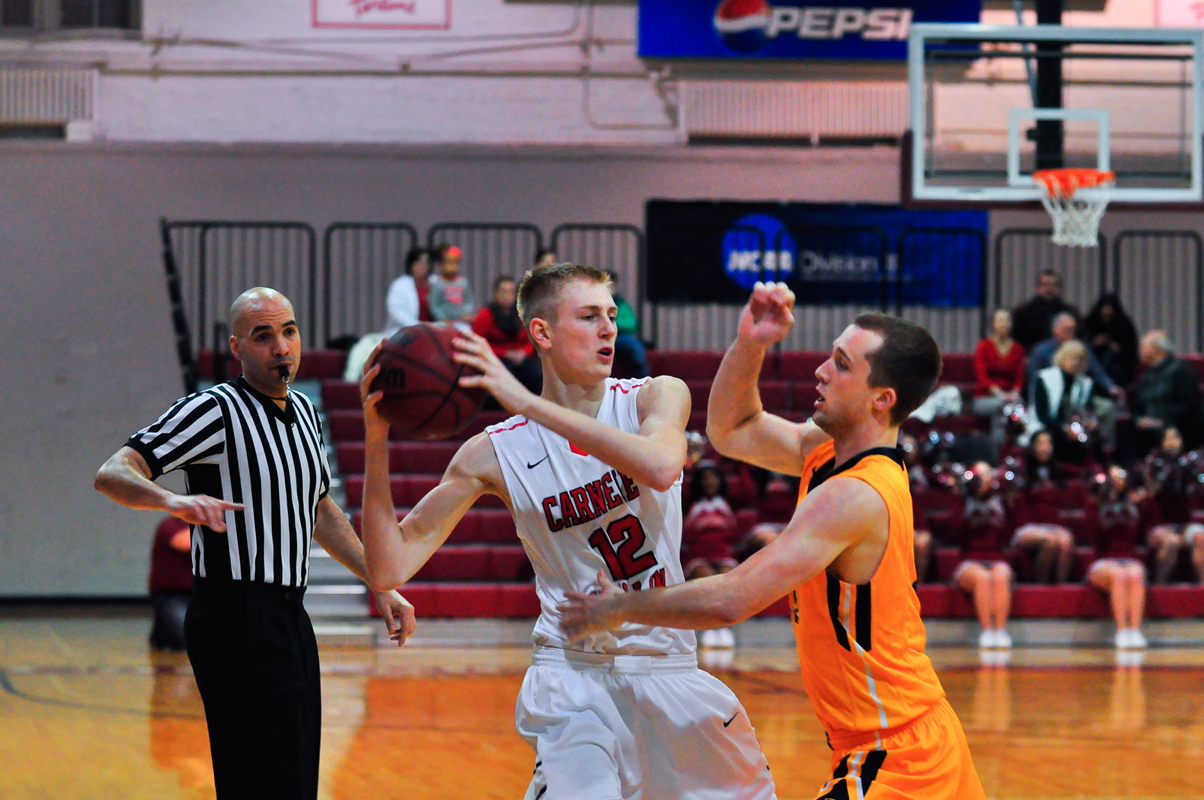 It was an all-around rough weekend for the Tartan basketball teams, going a combined 1—3 in their two doubleheaders against Emory University on Friday night and University of Rochester Sunday afternoon.

“In a nonconference game, we have more confidence and we play a lot better,” said first-year shooting guard Sade Idera. “During the University Athletic Association [UAA] games, the fact that we play conferences teams makes people nervous and that really changes the way that we play. We need to get back to the way we play nonconference games.”

The women’s team has a much better record in nonconference games than UAA games. Idera said that the team is challenged in UAA games because of the players they face: “You know that the person on the other team is just as good and works just as hard as you,” Idera said. “But you have to remember that you need to win because you’ve worked so hard for it. Sometimes, players don’t remember that and that’s what causes us to mess up.”

Both UAA games for the Carnegie Mellon women started with first half leads. Against Emory, the Tartans took the lead with senior guard Jacquie Shaw giving them a quick 6—2 lead. Carnegie Mellon was dominant inside, collecting several offensive rebounds in the first few minutes. First-year forward-center Lisa Murphy was destroying Emory in the paint, recording a double-double and leading the team with 28 points and 13 rebounds.

The Tartans took a slim one point lead into halftime given by sophomore guard Lindsay Poss’s two free throws with just under a minute remaining. Through the first nine minutes of the second half the teams remained close, alternating leads and ties.

Slowly Emory established a small lead based on several Tartan turnovers forced by the Eagles’ quick hands, recording a steal for each of their turnovers, and a bombardment of three-pointers. Down the stretch, Emory made its free throws and put the game away, cruising to a 87—76 win.

Sunday was a different story against Rochester, but the same ending for the women. Starting off slow, the Tartans didn’t grab a lead until junior guard Chandler Caufield hit a three pointer with just under 10 minutes remaining in the half.

From there, Carnegie Mellon took control grabbing a nine-point lead at half time, and stretching out to a 42—28 advantage just over two minutes into the second half. The Yellowjackets came back strong, eventually tying the score at 49.

“We started off really well, but we just didn’t finish the game well,” Idera said. “We began with so much energy, and it just dwindled as the game went on. If we had kept up our energy, I think we would’ve won.”

Shaw gave the Tartans the lead again late in the half, but Rochester took the lead for good with just of three minutes to play. Unlike Emory, the Yellowjackets missed several free throws down the stretch to give the Tartans a chance, but they were just unable to convert.

“It takes a lot of concentration and a lot of great leadership. We have all of those things, it’s just a matter of making sure that we know how to use them,” Idera said.
After the game Shaw said, “While this season has been tough, we are building a strong foundation for us to build on going into next year.”

Idera agreed, saying that for the Carnegie Mellon men, it was the tale of Dr. Jekyll and Mr. Hyde between Friday and Sunday. Against Emory, the Tartans started off slow, falling behind by double digits with less than eight minutes to go in the half, but quickly tied it back up with four straight three pointers by first-year guard Matt Hillman, senior guard Asad Meghani, and junior guard Seth Cordts.

It still took another two minutes for Carnegie Mellon to take its first lead of the game on another Meghani three-pointer. Emory retook the lead with under a minute left, but a jump shot by Hillman with just over 30 seconds to play gave the Tartans a 44—43 lead at half.

The Tartans kept it close to open the second half before the Eagles began to pull away. Emory had their largest lead at 16 points with four minutes to play, but Carnegie Mellon had one last burst to try and win.

Going a 9—0 run, the Tartans cut the lead to seven, but the Eagles killed their momentum.

Overall, the Tartans kept trying to fight back, but a blistering 50.7 percent shooting from Emory for the game was too much to handle as Carnegie Mellon fell 100—86.
On Sunday, the Tartans made their presence known early and often. Senior guard-forward Christian Manoli scored the team’s first five points, giving them a 5—2 lead they would never relinquish.

First-year forward Jack Serbin pushed out the lead with a set of three-pointers, giving Carnegie Mellon a 10-point lead.

Rochester got back to within five with just under seven minutes to go in the half, but 10 quick Tartan points, including two three-pointers by senior guard Rashaun Riley pushed the lead back to 11.

In the second half, the Yellowjackets pulled within seven points with under two minutes to play. They repeatedly fouled senior guard-forward Sean Brophy in an attempt to make a comeback. Brophy went 3—6 at the line, but his stifling defense helped keep the game out of reach for Rochester.

Aside from that slight scare at the end, the Tartans cruised to a relatively easy 73—62 win behind 19 points from Cordts to lead the team. Serbin finished with a double-double while leading the team with 11 rebounds.