Come down to pound town 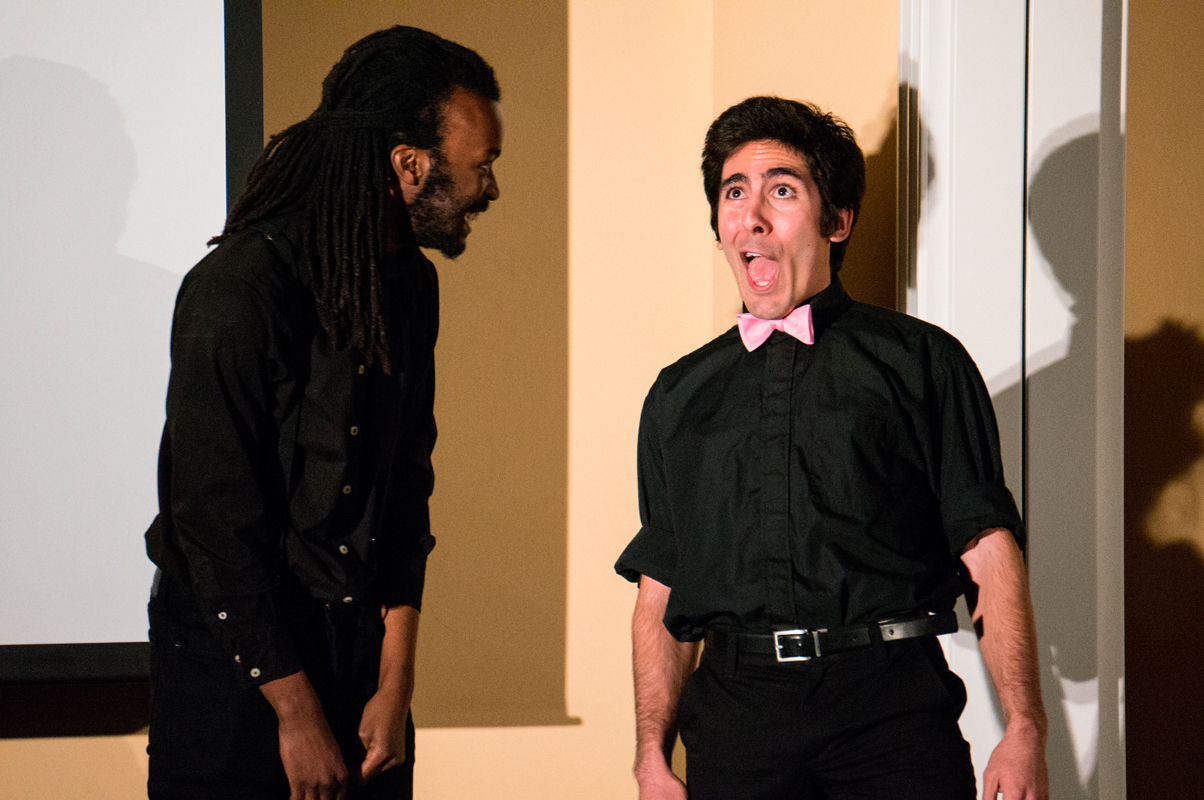 Friday and Saturday evening, Tisbert Sketch Comedy, a daughter organization of Scotch‘n’Soda, featured a variety of student-written sketches, displaying the group’s talent as both writers and actors. Joke after joke connected, aided by flawless delivery from the five actors, and made for a very entertaining show. If there was a drawback, it was that the show ended after only an hour.

The show took place in the fictional #town (pronounced ‘Pound Town,’ because of course it was), explained in a monologue consisting entirely of expertly crafted double entendre, delivered by first-year Dietrich student Brianna Hudock. The audience’s introduction to the tight community of #town was just the opener in a night’s worth of innuendo and absurdist humor that Scotch‘n’Soda is so adept at working into everything they do.

In addition to pre-written sketches, Tisbert incorporated an element of audience participation into their show. Approximately halfway through the night, junior engineering and public policy and civil and environmental engineering double major Erin Persson brought sad news to the viewers, warning everyone that the next skit “just isn’t funny.” Unsurprisingly, this statement turned out to be false as the group unleashed a patriotic bit detailing the introduction of three new members to the American Olympic curling team. After the sketch, Persson came back on stage and informed the audience that the sketch by itself was too easy; they wanted a challenge. Without context, five options to alter the sketch were presented to the audience and appeared on the screen. Bondage, one of the choices, raced out to an early lead that it unsurprisingly never relinquished.

The cast then performed the sketch again while handcuffed and otherwise tied to themselves and each other. Struggling with their new adornments, the cast tripped and stumbled their way through the scene, barely managing to recreate their version of curling as junior physics and materials science and engineering double major Yeshar Hadi ironically instructed Hudock, his fellow sweeper to “move your hands freely.”

Two sketches in particular highlighted the creative mastery behind the show.

The first, written by junior information systems and creative writing double major Chris Compendio, opened in a mundane fashion, with senior global studies and professional writing major Razghiem Golden playing a mild mannered driver being directed by a GPS. The GPS, however, quickly displayed nefarious intentions, as it instructed Golden to make illegal turns and drive on the sidewalk. The GPS began to channel its inner HAL 9000 as it directed Golden to a “shady alley” to conduct a drug deal resulting in the murder of a drug dealer played by Hadi. With the goods on hand, Golden proceeded to his final destination: church.

The second sketch featured Hadi as a recently divorced man in charge of three workers, played by Hudock, Golden, and junior BHA student Sam Riordan. Hadi came into the office infuriated by the failure of someone to refill the Brita filter in the break room. Despite his transparent references to his recently ex-wife, Hadi insisted that the empty Brita was a disgrace to common human decency, somehow reconciling his furious character with the ridiculous premise of the scene. The result was a truly hilarious scene that bordered on uncomfortable in exactly the fashion the author intended. The crowd was even left with a keepsake as Hadi slapped a banana being eaten by one of the characters into the second row.

“It was a dream come true, honestly,” said sophomore decision science major Maggie Davis, who directed the show. “This was my first directing experience with Scotch’n’Soda, and I was really nervous about the product. But seeing everything come together and seeing how everyone enjoyed it; it was so exciting.” It was certainly a successful first stop in the director’s chair.

Smart writing and an excellent cast meshed exactly as well as you would expect, and made #town an extraordinarily fun evening.