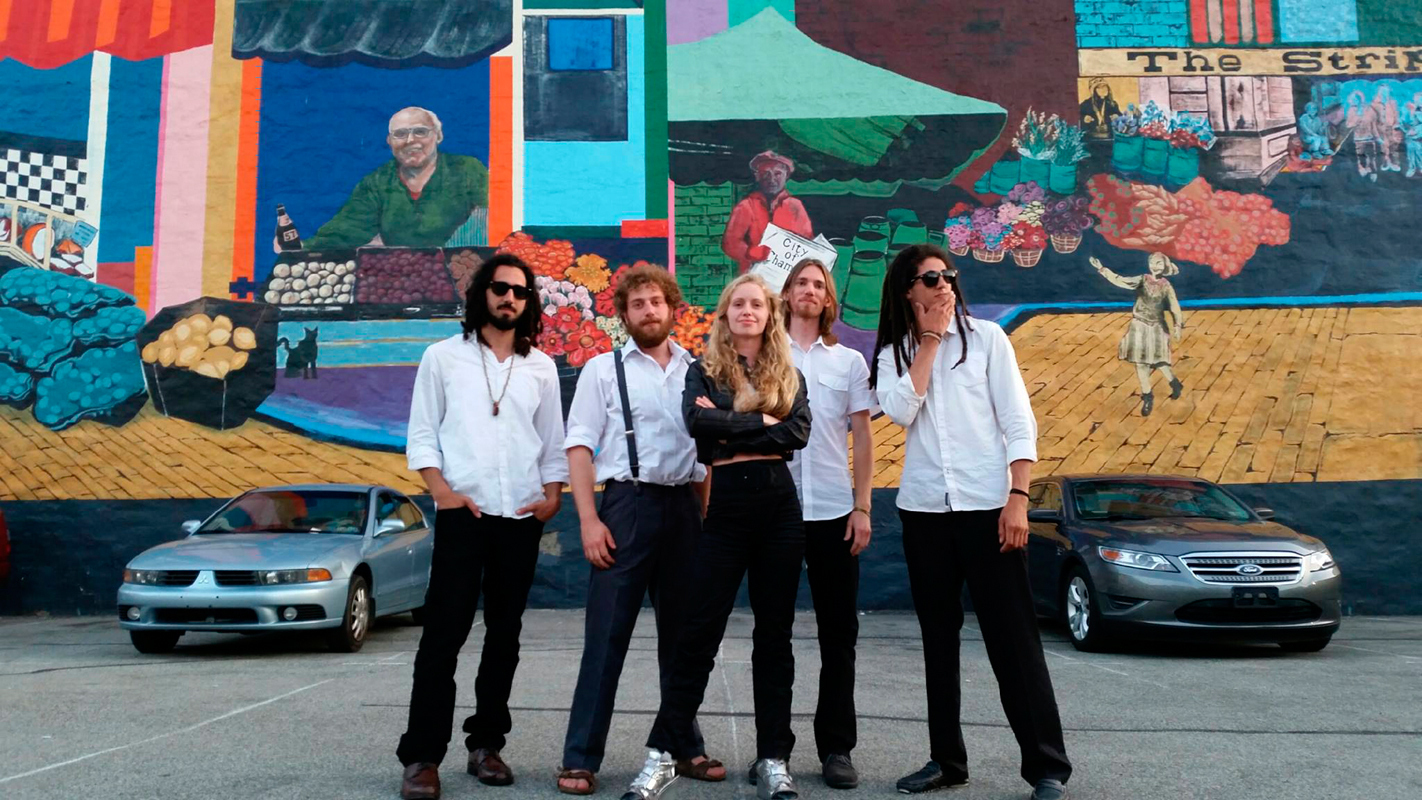 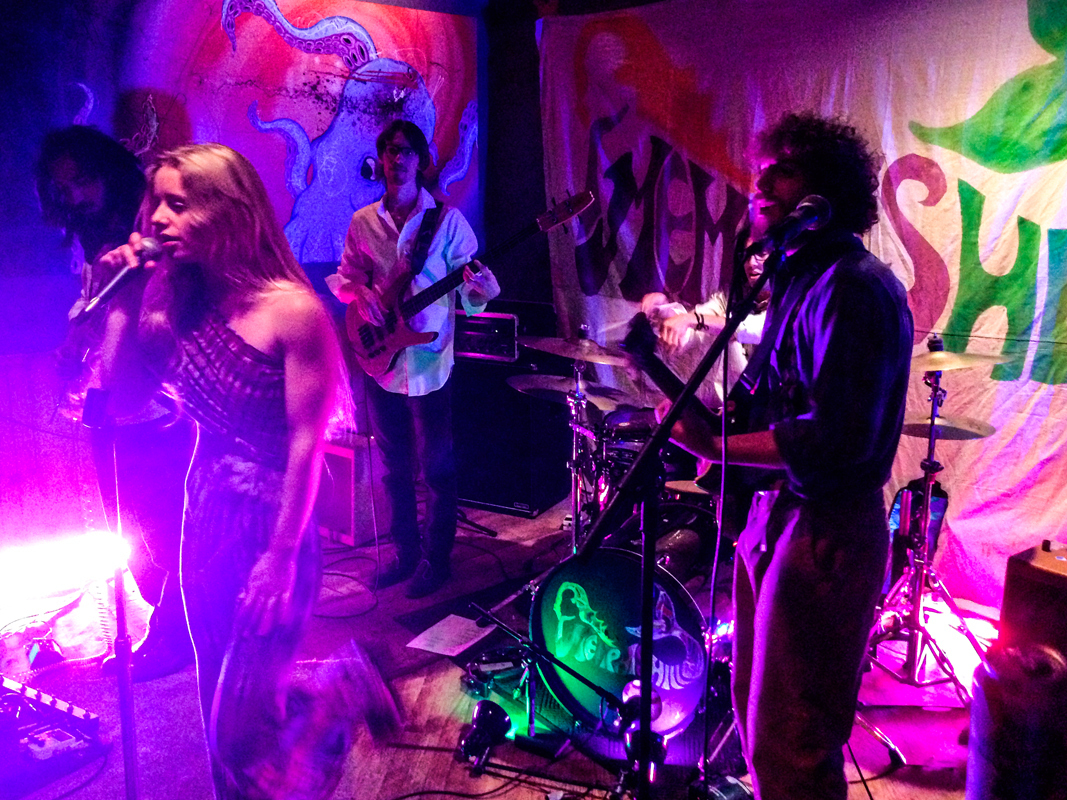 Memphis Hill celebrated the official release of their debut album, *Backwards Beginnings,* with a concert and album release party last Friday at the AVA Cafe and Lounge. (credit: Sid Bhadauria/) 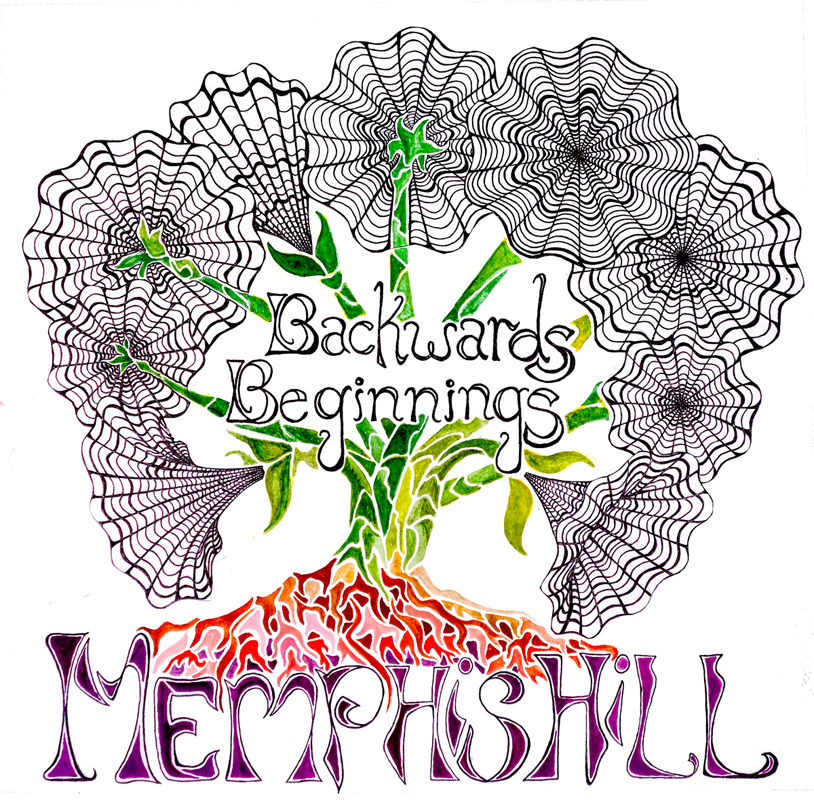 As I walk up the steep steps to Memphis Hill’s precariously perched house not far from campus, clutching a hastily-bought box of chocolates that I hope no one notices is from the CVS next door, I stop for a moment in front of the door to admire the feel of the house. Lawn chairs with crushed beer cans, a classic round grill — it all looks like a scene ripped from a southern frat house.

Hours before the release party for their debut album Backwards Beginnings, I knock on the painted front door, to see a smiling man in ridiculously amazing dreadlocks and large rimmed hipster glasses greet me — Memphis Hill’s drummer, chemistry master’s student Collin Cherubim, who explains that the band is waiting for a shipment of their album (also available for streaming on SoundCloud). After hasty introductions, I’m shown into the band’s house — a collage of original artwork painted by the band’s close friends decorate almost every wall, culminating in a visually insane community art project. Blues-rock artist Gary Clark Jr. is playing in the background, the distorted guitar contrasting with a smooth and measured voice.

Over the four hours or so I’ve spent talking with the members, going to their show, and listening to their debut album, it’s clear that, above all, Memphis Hill’s greatest asset is their fans. With a dedicated core of close friends cooking together, doing homework, going to all the shows, as well as creating insanely good artwork for the walls, shirts, album covers, and posters, Memphis Hill is a five-person band only by technicality. But damn are those five people talented.

I’m shortly introduced to guitarist Mac Inglis, who is wearing a skintight jet black bicycling outfit; guitarist Vic Cherubim (who would look startlingly like his brother, if Collin would swap some of his dreadlock length for facial hair); bassist Alex Holloway, a senior cognitive science major whose long blonde hair and disarming smile carries an overwhelming sense of good-will; and finally, female vocalist Elle Allen, a master’s mechanical engineering student who at one time split her time between singing, building race cars, creating robots, and grad-level research.

An interesting cast to say the least, and indeed, while talking with them, I began to see the dynamics at play within the band: Mac’s charming sense of humor, Collin’s irresistible boy-next-door friendliness, Alex’s analytical and thoughtful answers to questions the rest of the band had trouble answering, Elle’s warm laugh that would melt Frosty the Snowman, and of course Vic’s oddly musing proclamations that are hard to not good-naturedly make fun of. At one point, after asking whether the members’ college educations impacted their music in any way (hoping to fish out a story where Elle fixed a guitar pedal or something), Vic uttered the sentence, “What you do is who you are. Who you are is what you do. The music you make is coming from you, man” (Ok, I added the “man” at the end, but still). My first thought was, “Wait, seriously?” followed by, “That’s actually a good point, and I’m definitely going to quote that.”

The band later took me down to their practice area in the basement. An organ that the band bought on Craigslist stood by the left wall, and they informed me of a period of time when they had a 50-year-old man drive from an hour-and-a-half away to jam on the organ with them. Surprisingly, that deal didn’t work out for too long, and so the organ remains unused (and if anyone reading this can play a killer organ and likes blues rock, I encourage you to seek the band out). The lighting of the basement looks like an authentic replica of a Snoop Dogg (Lion?) music video, with deep purple shades and a single bright light accenting Memphis Hill’s signature mermaid logo on Collin’s drumset. I never got the chance to ask them why they chose a mermaid of all things, but the logo is amazing, with the mermaid’s entire body formed out of the letters Memphis Hill in psychedelic ’60s font (if anyone has a better name for the font that Jimi Hendrix used for his album Are You Experienced, I’m open to suggestions). The name of the band itself, Memphis Hill, comes from one of its biggest supporters who I’m told is a “Garden Fairy. A beacon of light that shines down on all of the band and a savior of children’s lives.” Sounds like a cool person.

As I stood there listening to the band’s jam sessions straight off the machine while scribbling in my notebook, I pondered the musical style of Memphis Hill. They have a wide range of musical styles, ranging from alternative rock, to more blues rock, to psychedelic, and more. Hearing their improvised session, it’s clear that, above all, the band has a clear sense of musical space. The guitar and drumming fade when Elle picks up the tempo of her vocals. When she subsides again, Collin picks up a syncopated rhythm, and Mac adapts with a wailing, distorted lick. It’s truly amazing to see the sheer musical talent the band possesses, especially with their cumulative history of rejecting classical and formal training.

Collin’s love for the drums started at an early age (“I actually started off with the accordion,” he joked), but he traded in rote memorization of rudiments for jamming out to ’80s hair metal with a more … alternative teacher. Alex has a similar history, having been involved with violin and trumpet, and then falling off with music until he became roommates with Collin his first year at Carnegie Mellon. He’s only been playing for four years, and while his bass lines aren’t too complex, they’re driving, and most importantly, they synergize with Collin’s drumming almost seamlessly (moral of the story — it’s never too late to pick up an instrument!).

Elle also got started taking classical voice lessons early on, but moved on to rock, jazz, and, now, whatever she feels like. Listening from the machine, I was impressed with her vocal range, tone, and ability to improvise syllables and sounds that mesh with the rest of the band. Perhaps the most surprising element of the recording I listened to was when Vic moved from lead guitar to sort of a supporting role, Mac sometimes stepped up with a rather surprising repertoire. For someone who wears flannel shirts with suspenders, he can improvise some startlingly good and varied rhythms, ranging from Led Zeppelin-like wailing to eastern-Arabian sounding rhythms. As awesome as hearing the machine was, I was eager to listen to the real deal. Plus, my time with the band was way longer than I thought it would be, and I was really late for Concepts of Math. So, fashioning a short excuse that the band understood like only a band composed of Carnegie Mellon students would, I made my way back down the steep steps, counting down the hours until their album release concert at AVA Cafe and Lounge.

The first thing I noticed walking into the lounge was the crowd. I had heard about the band’s loyal fan base before, but watching everyone in the room, it was almost trivially easy to pick them out. They were the ones jamming out the hardest, the ones at the very front talking with their other friends who they’ve been coming to Memphis Hill concerts with for almost two years. They’re the ones who stayed even after the band exhausted their repertoire of original songs, the ones who still screamed for an encore anyway, the ones who refused to leave even as the band went over their allotted time, the ones who were there for one purpose only: to support their favorite band.

They were fun people, and I didn’t feel like an outsider for a second. I vaguely remember jamming out with a cute girl over Collin’s ridiculously good drumming (seriously, imagine someone with the speed of a punk rock drummer, but who actually knows how to play more than one thing and can switch from metal thrashing to syncopated blues at the drop of a hat), watching as Vic nonchalantly shredded the guitar with the facial expression of someone ordering a coffee at Starbucks, some girl putting a ridiculously large cowboy hat on my head that wasn’t mine, then dancing with some dude who was wearing a red dress for some odd reason, staring at a picture of an octopus being shot in the head for like five minutes straight to the tune of one of Memphis Hill’s psychedelic numbers, and discussing why Doolittle was The Pixies’ best album at the bar. I had a good time, is what I’m saying. After the show, Vic was gracious enough to invite me to the after party, but as soon as I headed home, I felt so tired I passed out as soon as I hit the bed, ears pleasantly ringing, with a Memphis Hill T-shirt and poster in my hands.

It’s hard to say anything bad about the band, considering the fact that they’re awesome people and insanely talented, but the fact remains that Memphis Hill has a long way to go if they’re looking to get even bigger. The songs are good, great even, but on each song, I can’t get over making the obvious connections to the sounds of other bands. Much of this can be traced back to their creative process. They take their improvised jams (clocking in at over nine minutes) and cut the parts they don’t like. Their first album consists simply of the first eight finished songs they had, and indeed the band members themselves disagree on the direction their sound is evolving.

While Mac, for example, believes that the band is heading toward a more roots rock vibe, and away from the softer tracks found on their debut album, every band member has a different opinion. As Collin aptly pointed out, the inherent diversity of the band’s musical backgrounds is both a strength and a weakness. Between the members of the band, they have the elements to create a unique Memphis Hill sound. For example, I wish Mac would have included some of the more esoteric melodies from the recorded jams they showed me on the album. I want to hear Elle singing in an Ella Fitzgerald voice over Arabian guitars. Most of all, I wish more songs featured Collin. Truly the heart of the band, on their best songs like the song “I Feel You Sweet Thing,” an apt listener could accurately guess the entire band’s movement at a given point in time solely by listening to Collin’s rhythmic tendencies. I want to hear the band’s psychedelic tendencies more, and while Elle’s singing is often so good I don’t care, an evolution of the band’s lyrical songwriting could be used.

In summary, perhaps the best thing the Memphis Hill band can do right now is nominate one of their own to be their producer for the entire album to develop a unique, marketable “Memphis Hill” sound. The band can go a long way in getting another instrument, like the organ or perhaps a trumpet. Don’t let this deter you from listening, however. Memphis Hill is a band to keep your eye on, and their musical talent and potential is undeniable. Support them by spreading the word about Backwards Beginnings, available on SoundCloud and CD, and by coming to their next show on Nov. 14 with Beauty Slap.