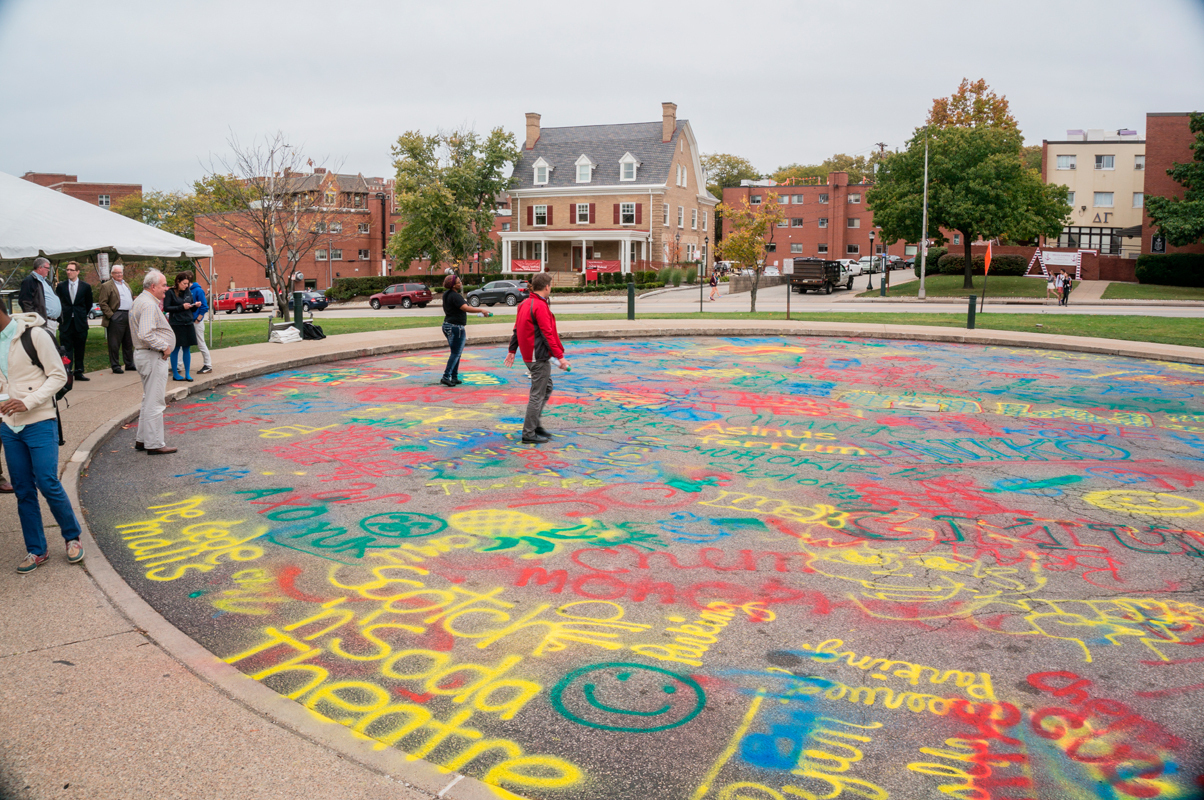 Students got the opportunity on Thursday to spraypaint their mark on the CUC Turnaround, which will be closed as part of an 18-month expansion. (credit: Abhinav Gautam/) 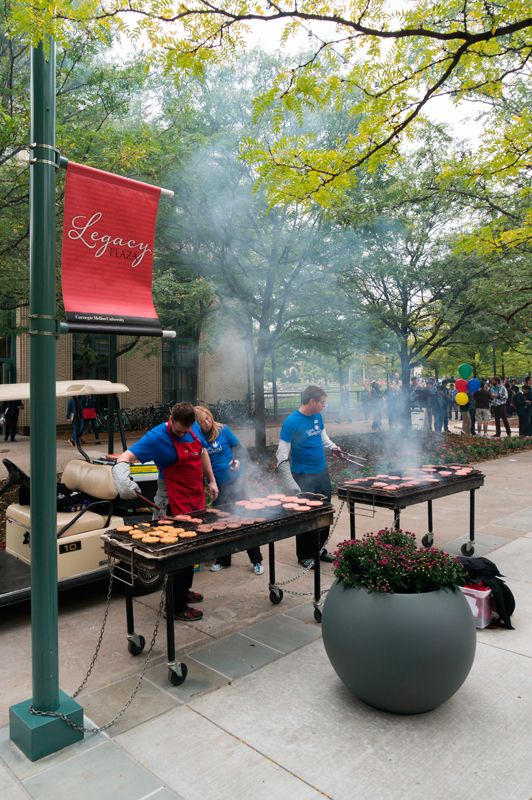 On Thursday, a modest ceremony marked a big occasion for the university: the official groundbreaking celebration of the Jared L. Cohon University Center (CUC) expansion.

The expansion has already begun with construction on the campus parking garage, and is estimated to take approximately two years. The completed project will add 62,000 square feet to the building, according to the Campus Design and Facility Development’s Cohon Center Addition page.

The ceremony celebrated the efforts of a large group of people in making the project a reality, and the official groundbreaking of the construction. To that end, senior biological sciences major and Student Body Vice President Shalini Ray, Vice President for Student Affairs Michael Murphy, and Pittsburgh City Councilman and Carnegie Mellon alumnus Dan Gilman (DC ‘04) spoke. Student groups Raasta, SoulStylz, and Scotch’n’Soda performed as well.

After the speeches and performances, the Office of Student Activities gave students and faculty an opportunity to spray paint a portion of the CUC turnaround to commemorate the years that it has served as a Carnegie Mellon landmark.

“I’m very excited about the whole impact that [the expansion] will have on the student experience,” Gina Casalegno, dean of student affairs, said. Casalegno spray painted “My heart is in the CUC expansion” on the pavement.

The expansion of the CUC, which was built 18 years ago, marks the symbolic expansion of what Murphy called the “meta-curricular” life of Carnegie Mellon students.

“Ten years ago, we saw an explosion of student on-campus involvement. Students use the CUC to recreate, to work out, to meet with each other and with faculty, and to communicate their student experience. This expansion is the opportunity to enhance what we already have,” Murphy said in his speech. “A healthy and socially engaged campus.”

According to Murphy, the expansion is a result of the vision that President Emeritus Jared Cohon and current President Subra Suresh have for the student experience, as well as part of an effort to give the Forbes Avenue corridor a “front door.”

“This is a project that ties very nicely into our new Forbes corridor. It really paints CMU as a place for innovation, a place for everything that CMU is truly about,” Murphy said. “It’s really exciting, and the context is so important for this project.”

Gilman, who spoke following Murphy, said that the project was exciting and important to him not only as a former student, but also as a representative of the district.

“[Carnegie Mellon] is embracing Forbes Avenue; we’re giving a new face to the future of Forbes, which will add definition to campus. This building is a huge part of that,” Gilman said. “I am fortunate to represent a district that encompasses a booming center of growth.”

According to Director of Student Activities Elizabeth Vaughan, the expansion of the CUC is going to radically impact campus life through the massive increase in athletic and recreational space, a studio theater, and a new lobby space that will serve to welcome visitors to the university.

“In planning this building, we leveraged every possible space in the building to be able to accommodate every type of activity. We thought really strategically about how to maximize every space. There’s too much happening on this campus to let any space just sit unused,” Vaughan said.

According to Vaughan, the construction on the building is slated to take approximately 18 months, which would put the opening ceremony sometime next spring, if all goes according to plan.

“How this project came to be is so unique and indicative of the partnership between student affairs and athletics,” Vaughan said.

“Everyone working on this project is incredibly passionate about the student experience and wants the CUC to be the hub of on-campus life to address the needs that have existed for a very long time.”

Vaughan, who spraypainted “Tartan Pride” on the turnaround, said she is most excited to see what the campus does with the space that it will be given.

“After being here for 10 years, I’m consistently surprised by the ways that the students here dream and come up with creative ideas. How we are envisioning the space being used might turn out to be very different from how the students actually use it, because they’re constantly dreaming and coming up with totally different ideas,” Vaughan said. “I’m sure that within a year, we’ll see a great new event crop up as a result of the new space and the new opportunities that come with it.”