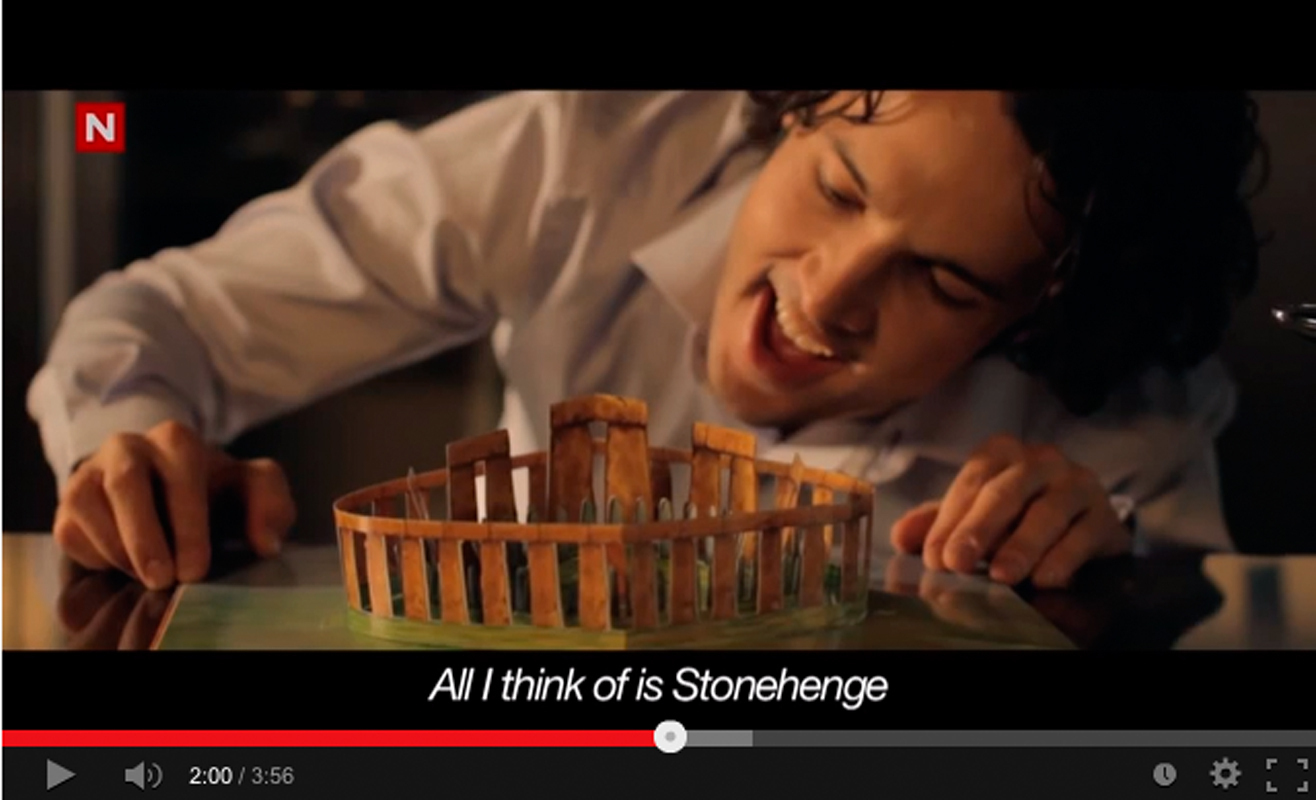 In the music video for Ylvis’ “Stonehenge,” the main character’s obsession with the archaeological monument constantly preoccupies him, even compromising his sex life. (credit: Screenshot courtesy of youtube.com)

If you see somebody screaming something like “JTCHOK-CHOK-CHOK-CHOKTA!” with an accompanying dance in the next few weeks, don’t worry. Chances are they’re emulating the musical stylings of the Norwegian musical cabaret act known as Ylvis, rather than indulging in something that’s illegal in the state of Pennsylvania.

Ylvis is composed of brothers Bård and Vegard Ylvisåker, who have performed in Norway since 2000 and have since achieved some level of fame in Europe. They currently have a show on the Norwegian TV channel TVNorge, which is responsible for funding the big-budget music video for their single “The Fox,” in which the brothers sing about the ethereal beauty of foxes and scream nonsensical “fox noises” at the tops of their lungs.

It is probably best to become familiar with this video, because it is rapidly gaining popularity to the point that incessant references, repostings, and a number of unfunny covers and parodies are inevitable.

Is it the next "Gangnam Style"? Most likely not. The heir to the "Harlem Shake" crown? Luckily, it's doubtful that the video will become that ubiquitous. It’s a shame that Ylvis is probably going to be remembered for giving the world a single clever video, which will then devolve into irritating repetition, because the rest of their work that has been translated into English is top-shelf comedy.

The songs “Pressure” and “Work It” both poke fun at the upscale hip-hop scene. “Work It” is an explicit song whose humor comes from a complete lack of sexiness. While one brother lays down the innuendo, the other explains the actual meaning of his every phrase and provides anatomical information and the specs for their hot tub. “Pressure” sees the brothers laying down the law about the need for proper amounts of pressure to be applied in situations ranging from popping balloons to negotiating a peace treaty in the Middle East.

Speaking of the Middle East, there's also “Jan Egeland,” a Bruce Springsteen-style power ballad about the “United Nations Super Hero Man,” whose peacekeeping efforts are known in the U.S. only to the most avid readers of news. In another song, “Stonehenge,” one member of the duo is so obsessed with the mysteries of the titular artifact that intimate moments with his wife are filled with expletive-laden musings on its origins.

The crown jewel of their work — unless you know either Norwegian or Russian, in which case “Janym” might be glorious — is “Someone Like Me.” It starts out as a traditional love song straight out of a Disney musical, only to suddenly become something else entirely that still manages to be heartwarming. Kinda.

So, if you have a thing for clever songs or Norwegian comedy, definitely track down the Ylvis playlist on the official TVNorge YouTube channel.