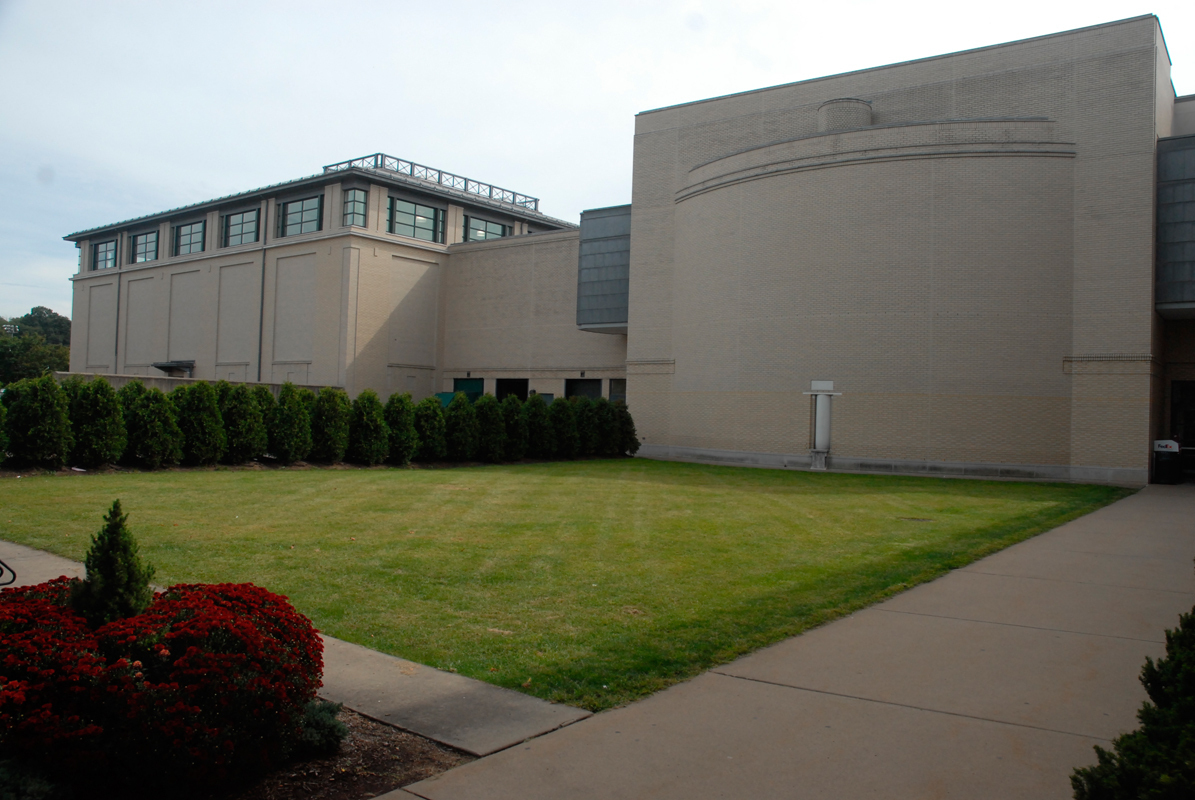 The University Center addition will occupy the space in between the current building and Forbes Avenue, seen above. (credit: Greg Hanneman/Senior Staffwriter) 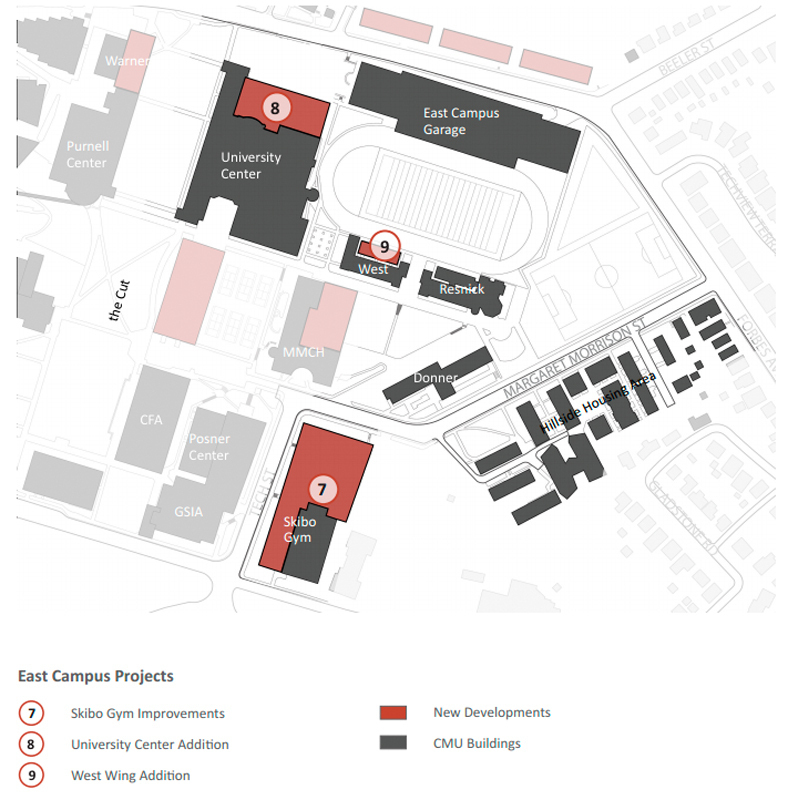 A diagram from the master plan showing the planned developments to certain areas on campus. (credit: Courtesy of Institutional Master Plan)

The Carnegie Mellon administration hopes to develop the University Center into the space facing Forbes Avenue within the next three years, with additions including an exercise area for strength training, cardio exercise rooms, a cycling studio, and a multipurpose exercise studio.

A town hall presentation was held by the University and Cannon Design on Wednesday in Rangos 3 to discuss Carnegie Mellon’s future University Center, part of the University’s 10-year master plan to expand and renovate its facilities.

Students and faculty attended the meeting, looking to learn more about the project and voice their concerns and opinions.

According to Associate Director of Athletics Josh Centor, the athletics portion of the master plan has three phases.

The first phase has already been completed with the installation of new turf on the soccer fields a few years ago. “It has more than doubled occupancy,” he said while complimenting the new fields.

The second phase is still in progress; the third phase will focus on renovations to Skibo Gym.

Wednesday’s town hall meeting focused on the second phase, which Centor describes as “meeting the needs of the campus community in the realm of fitness and athletics” in the future University Center. According to the current plan, the renovations will change the dynamics of campus by shifting the center of the Pittsburgh campus.

The new addition is expected to include a new fitness center and studio theaters, as well as shelf space in the University Center basement.

Ralph Horgan, associate vice provost of campus design and facility development, noted that the meeting “is not the final product. We want to hear from everybody.”

Centor said that the project showed a “commitment to student experience.”

Centor was a strong advocate for a better weight room. “Right now, our weight area is at the very back end. If you want to do serious strength training, you can’t do it.” The facility on the first floor will therefore have newer, heavier weights and machinery.

The first floor will also house a new studio theater. Elizabeth Vaughan, director of student activities, said that the studio theater would be multifunctional, to be used for dance rehearsals and performances, music concerts, and small theater productions. “We’re bursting at the seams in terms of rehearsal space,” Vaughan noted regarding the problems currently faced by many dance teams and performance groups at the university.

“We’re helping to address some of the theater needs of organizations like Scotch’n’Soda,” she added. The studio theater would have dance-quality flooring along with lighting systems and a sound system that Vaughan hopes will be easy for people to understand and use.

The second level of the University Center addition will have another fitness area on top of the fitness space to be built on the first floor, this one with cardio equipment. The fitness center will be an upgrade over the current space for such equipment.

Along with being a cardio workout area, the floor will have large- and medium-sized exercise studios and a cycling studio.

With interest in physical education classes also at a high, Centor claimed, a new fitness center with such space would be beneficial.

“Now we’ll have three spaces every day where we teach these classes. The first and second floors of the fitness center will be connected, with individuals being comfortable working out on both floors,” Centor said.

Horgan hopes there will be “a sizable amount of space in this building” with more windows that let sunlight into the building. He also mentioned possible ideas to make the new University Center more aesthetically pleasing, such as a garden, rock walls covered in plants, and maybe even a small fountain.

The meeting revealed that a schematic design is currently being developed. The hope is for a complete design to be finalized at the beginning of 2014, with construction starting in spring 2014 and finishing at the beginning of the 2015–16 academic year. Presenters encouraged guests to view a current model they have of the building.

Various individuals asked questions at the town hall about the future building, with an emphasis on the new studio theater.

Andrew Schwartz, a junior information systems major, asked if there would be a stage in the rehearsal space; he was told that while there would not be a stage built into the space, there was also a fairly minimal need for such a stage.

Students and faculty raised other feedback, including the recommendation of including a visible sign that would welcome people to campus, and the potential problem of having too much sunshine from the building’s many windows.

While many students are excited about the addition, some wonder if a new fitness center facility is needed. When asked if he felt the Skibo Gym or University Center facilities need an upgrade, Aditya Dargan, a sophomore business administration major, replied, “No, they don’t.”

More information about the plans for expanding the University Center can be found at http://www.cmu.edu/cdfd/master-plan/.