The science behind a breakfast staple 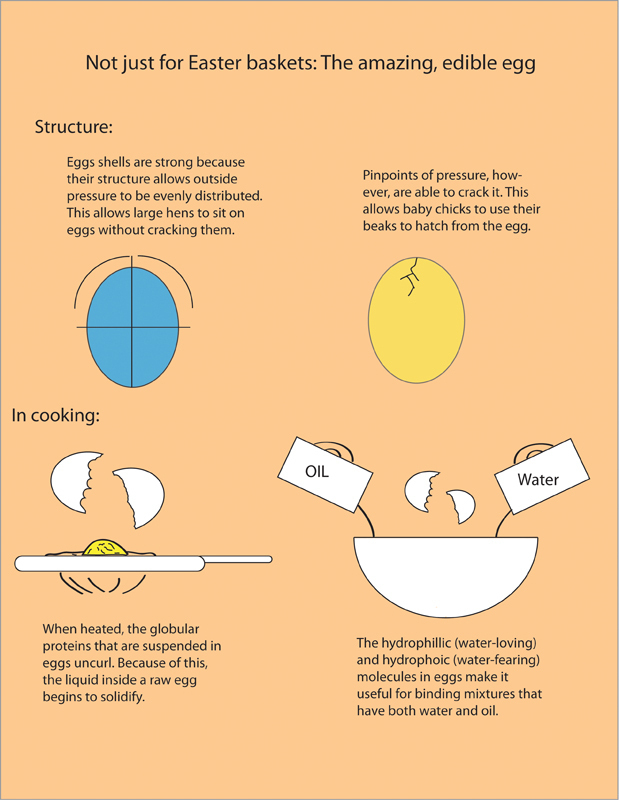 In many people’s thoughts, eggs are as strongly associated with Easter as pumpkins are with Halloween, or turkeys with Thanksgiving. According to about.com, one theory suggests that his is because in days before modern technology, the beginning of spring would be the first time people tasted fresh eggs after a cold, hard winter, making them special during spring. However, there is much more to eggs than just being symbols of celebration.

Eggs are used by birds, reptiles, and certain mammals as a way to produce offspring. Instead of giving birth to their offspring after they have fully developed, these animals lay eggs instead. The offspring finish growing inside these eggs and then hatch once they have matured enough to be able to face the world.

Eggs come in many different sizes and colors; however, all have commonalities that let them perform essential functions. All eggs have membranes to keep their insides together and to protect the defenseless young before they hatch. In addition, several types of eggs also have a shell which is formed from calcium carbonate, a material that also makes chalk and pearls.

According to pitara.com, the eggshell is a wonderfully strong material that gains its strength in part from its structure — it is shaped like a three-dimensional arch that lets it evenly distribute any weight put on it. Due to this feature, if someone squeezes an egg by wrapping his or her hand around it, it likely will not crack. Similarly, due to the arch-like structure of the egg, it is difficult to crack an egg by squeezing it at its ends. This even distribution of loads over the shell is why heavy animals like hens can sit on top of small eggs without cracking them. However, when applying sharp pressure to any one area of an egg — for example, cracking it on the side of a pan — the egg will easily break. This is also a useful property of an egg, for it allows the chick (or other baby animal) inside to exit the egg by simply pecking at an uneven pressure.

Apart from the biological uses of eggs, you've probably noticed how handy they can be in the kitchen, too. This is due to the properties of the insides of eggs, which contain materials needed by the developing young. According to Exploratorium.edu, these materials are globular proteins, which are long strands of protein molecules twisted into almost spherical shapes. These proteins are suspended in water inside the egg, and they're the properties that are so useful in cooking.

For example, heating up eggs causes these spherical molecules to gain energy and uncurl. These uncurled molecules begin looking for others to form connections with, since their own spherical connections have broken. The proteins start connecting to each other, and water begins to get trapped in the connections between these molecules. This causes the egg to solidify when it is heated up. Continuing to add heat to these molecules will cause them to form even more connections with each other, which is the cause of the rubbery texture of eggs that have been overcooked.

Another cool property of these protein molecules: Some parts of them attract water (hydrophilic) while others repel water (hydrophobic). So, in mixtures where one needs water and oil to stick together, eggs can be used to make this happen. The proteins in eggs will uncurl in such a way that the hydrophilic part will be attracted to water, while the hydrophobic part will attach itself to oil. Therefore, these proteins can hold the water and oil mixture together without any separation.

You might also have noticed that eggs get fluffier when beaten. This is because adding air to eggs while beating them causes protein molecules to uncurl and take up more space. These molecules uncurl because the hydrophobic parts attach themselves to the air molecules, trapping more air in the egg mixture, leading to fluffier eggs.

For such a commonplace ingredient, eggs have many interesting facets to them. From the variety in types of eggs to the science inside each one, they are truly “egg-citing!”