The annual wats:ON? festival makes a ruckus in the College of Fine Arts 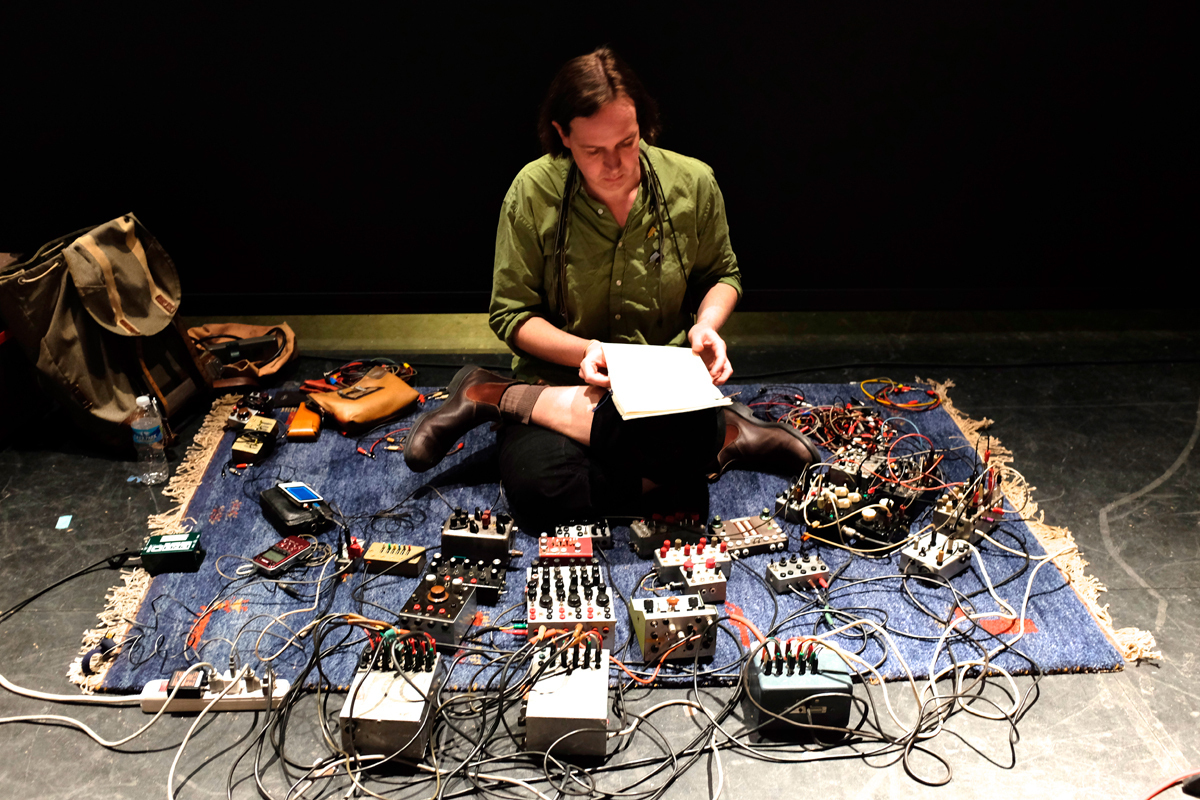 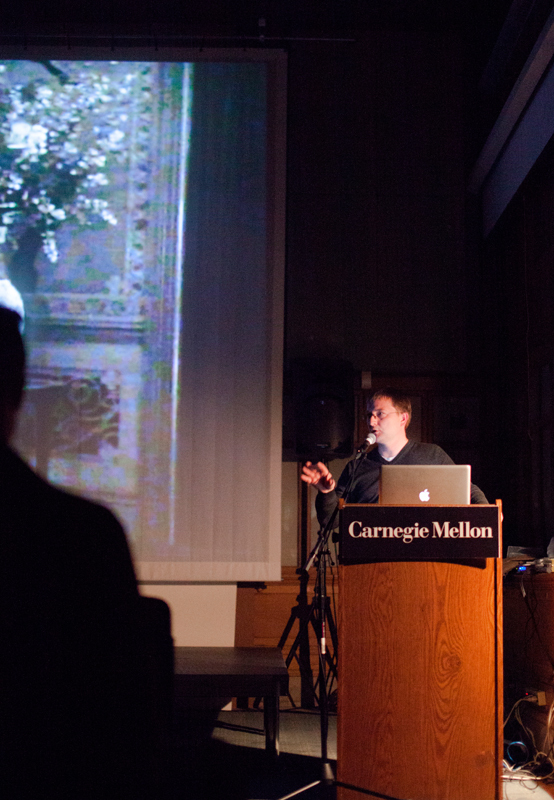 Graduate student in film Jeff Hinkelman leads a talk and screening on the history of sound in film. (credit: Jonathan Leung/Assistant Photo Editor) 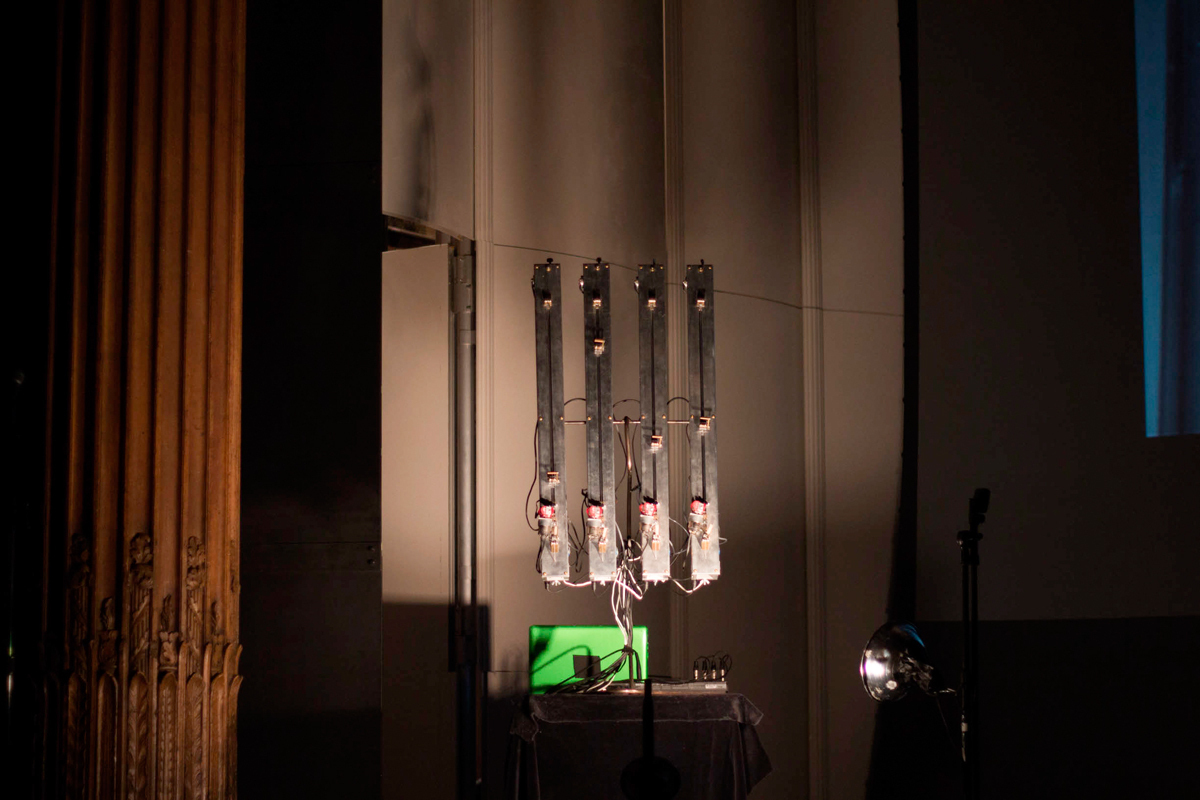 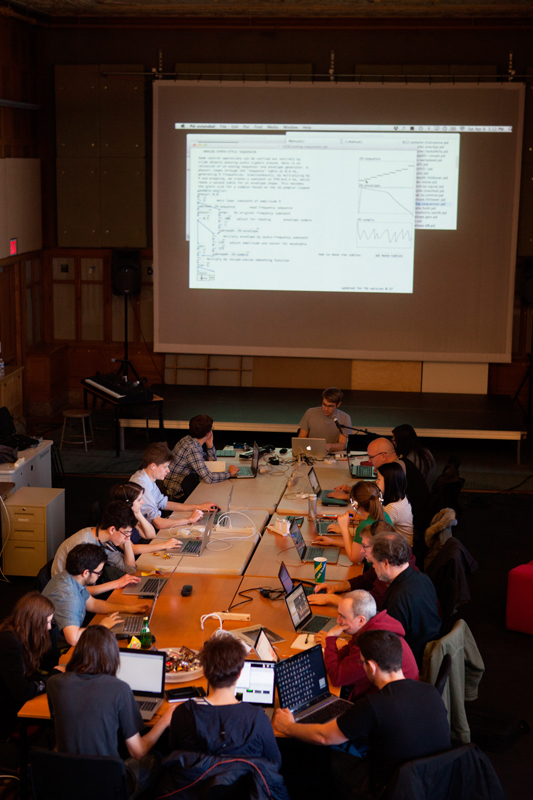 “Noise continually surrounds us, from white static to violent intensity,” reads the program for this year’s wats:ON? festival. “Noise asks you to surrender to the possibility of the rush of the sublime.”

There were certainly sublime moments during last week’s wats:ON? festival, an annual arts and architecture festival dedicated to the memory of the late Carnegie Mellon architecture professor Jill Watson and curated by associate professor of art Golan Levin and director of Carnegie Mellon’s architecture pre-college Spike Wolff. This year’s festival went with the theme “NOISE,” which many of the presentations and events alluded to. The festival spanned Thursday through Saturday and featured a variety of lectures and performances in the College of Fine Arts building. The noises over the course of the festival were by turns educational, overwhelming, inspiring, thought provoking, and inescapable.

Although the festival offered four events total, I attended two very engaging but very different events — Jeff Hinkelman’s lecture and screening titled “What Is the Sound of a Pig Dancing?” and the Cyborgs of Sound performance followed by a piece by experimental musician Lesley Flanigan.

Jeff Hinkelman: What Is the Sound of a Pig Dancing?

Hinkelman, a Carnegie Mellon graduate student in film and head of the Hunt Library video collection, offered guests an engaging and sweeping overview of the history of sound in film on Friday night. As Hinkelman revealed, “Film comes from sound”: The idea for film originated when entrepreneurs thought to add pictures to Thomas Edison’s invention of the phonograph, which recorded sound.

The venue for the screening, the Frank-Ratchye STUDIO for Creative Inquiry, was pleasant, intimate, and appropriately sized for the turnout: Though small, the room was nearly filled. The festival organizers also invited guests to enjoy free popcorn and sugary treats, which made for an even friendlier and more comfortable atmosphere.

The only drawback was the lack of sophisticated equipment: Hinkelman used an ordinary projector to display short films via YouTube. Although Hinkelman also didn’t seem to favor YouTube as a screening medium, the quality of the short films was just fine for his purposes.

Undoubtedly the most impressive part of the evening was the student performances that accompanied some of the screenings. Hinkelman had wanted to emulate screenings of silent films as they had existed in the silent film era — often in theaters or other venues with live accompaniment. For this reason, senior Bachelor’s of Humanities and Arts student in film and musicology Matthew Zurcher and senior piano performance major Brian Gilling joined Hinkelman at the front of the room, offering brilliant and entertaining live accompaniment to the visuals onscreen.

Other highlights included a hilarious animated short called “Ain’t She Sweet,” which kept the audience chuckling with its adorably scheming animals scurrying back and forth across the screen. Another animated short, “Gerald McBoing Boing,” used sound effects to tell the charming story of a boy who spoke not in words, but in outrageous sounds like the honk of a horn or the boom of explosives.

In contrast to the more educational, historically based Friday night film screening, the Saturday night performances by local electronic musicians brought an explosion of experimental sounds to Kresge Theatre. Each of the four artists brought something very new — at times both beautiful and abrasive — to the stage.

The event opened with Carnegie Mellon adjunct professor of art and internationally renowned musician Eric Singer and his robotic guitar — although by Singer’s own admission, the robo-guitar did most of the work. “I have a very important role in tonight’s performance,” Singer joked. “I press ‘go’ and it takes over.”

The bizarre-looking instrument consisted of four vertical black slabs, each with small objects moving up and down central strings like beads on an abacus. It looked somewhat like a strange, wobbling, four-eyed alien with rotating red pupils. And when Singer did press “go,” the result was a disjointed but somehow rhythmic series of beeps and boops, layered over a steady strumming sound and a solid bass in a kind of computerized chirping. It was a fascinating and impressive accomplishment; the complex robotic sounds occurred in complete synchronization.

Local artist and musician Jeremy Boyle took the stage next with a similar concept, although his instrumentation drew a much stronger resemblance to what we’re used to, complete with a drum set and an electric guitar resting on a stand. But upon closer inspection, it was clear that the setup was far from ordinary: Wires ran from each of the percussion instruments, and the guitar was equipped with a small robot somewhat similar to Singer’s robo-guitar. Clasped around the fingerboard was an object that eerily resembled a hand pressing down on the strings, and on the body of the guitar, small mite-like constructs reached out and plucked individual strings.

The music itself started out haunting and high-pitched, with wooden flute-like tones emanating from the instruments. Boyle supplemented these sounds with an eletric guitar he played himself. A few times, Boyle leaned back and took a water break as his instruments carried the music for him. As opposed to Singer’s rhythmically convoluted pieces, Boyle preferred simplicity and beauty to complexity.

Local instrument builder Michael Johnsen’s performance, however, can only be described as complete auditory chaos. Right from the onset, the theater was filled with a rapid, deafening, and furious series of random sounds — a hectic, incessant barrage of clicks and squeaks. The artist sat onstage looking over a tangle of boxes and wires, regularly leaning forward to dial up or down certain sounds.

For the most part, the experience was downright unpleasant: Some of the sounds were so shrill that a few audience members clapped their hands over their ears. When the cacophony ended and Johnsen exited the stage with a simple “thanks,” many of the the audience members breathed a sigh of relief. The inundating effect was interesting on a theoretical level and most likely intentional — but that didn’t make the sensory experience any less uncomfortable.

The festival organizers held a brief intermission before the final performance by experimental electronic musician Lesley Flanigan. Flanigan’s setup looked somewhat similar to Johnsen’s, though more organized; she kneeled over a collection of wooden box-looking instruments, a microphone in hand. When the music began, it was blissfully different from Johnsen’s.

Flanigan began by blending her own vocals with the instruments for simple, pure-sounding octaves before branching into different harmonies. She used the microphone to amplify different elements, first holding it to her mouth and then dipping it gracefully over each of the instruments, creating soft swells of sound.

The piece grew in volume and complexity. Like the musicians she followed, Flanigan embraced dissonance and abrasiveness in her work, allowing certain shrill, crackling noises to become almost deafening at points. Occasionally, Flanigan’s sultry voice came through, enchanting the audience with her beautiful vibrato.

Of the four artists, Flanigan’s work had the most potential for transportation: During her piece, listeners could allow their minds to wander, imagine, and enter a totally different world. Her piece was undoubtedly a favorite of the evening. After the sounds faded and Flanigan stood up, Kresge erupted with cheers and applause.

All four artists were true performers in that, during their acts, their actions were almost as important as the music. Although the noise was the focus of the evening — and of the entire festival — it was just as fascinating to watch the process of music-making unfold as to listen to the result.

It is a testament to the success of the festival that two of its events alone could be so enthralling yet so different; this diversity only added to the educational and awareness-raising value of the festival. Both events left guests thinking, questioning, and wanting to experience more — a sign that wats:ON? 2013 did exactly what it set out to do.