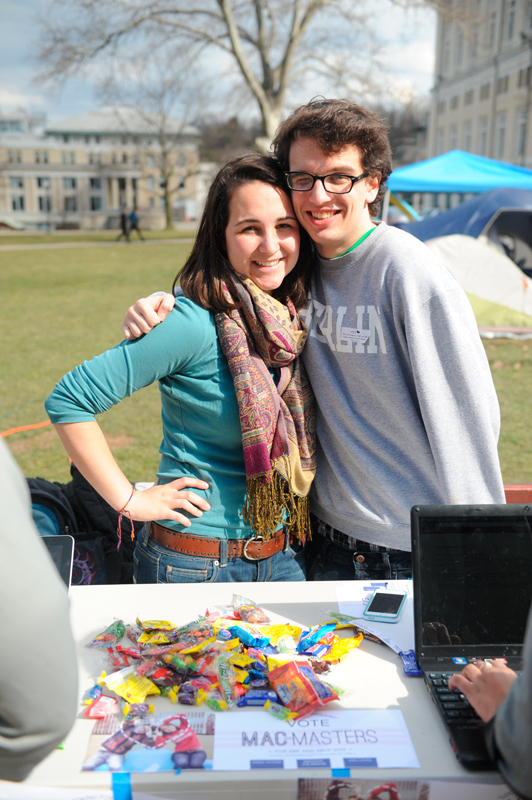 MacGillivray and Masters hope to achieve their platform initiatives through their “ABC” program.

“A” stands for aided access, which includes extending communication between current and future leadership.

“B” stands for bridging The Bridge, by focusing on organizations and creating a centralized events calendar. “C” stands for “CMU loves”; Macgillivray and Masters hope to implement initiatives that can improve student happiness and alleviate stress culture.

They also plan on implementing more vegetarian options on campus, as that was one of the most requested suggestions from the student body.

“We’re looking to make CMU more fun, and in general, making sure more things are available on campus,” MacGillivray said.

MacGillivray and Masters hope to create an overall sense of school pride by connecting organizations.

“There are also a lot of organizations that are proud of what they do, not necessarily CMU pride but like ‘Buggy pride’ or this pride or that pride. But we think that by connecting these organizations you can create this overall sense of CMU pride,” MacGillivray said.

Masters addressed the concern over a lack of campus unification, especially among separate schools, by proposing ways to continue the sense of bonding that first-years experience on campus.

“One of the biggest exceptions to the separation between schools is through freshman housing. But that sense of community disappears after your first year because everyone gets scattered the way the housing system is set up. So we want to establish more roots by trying to extend the network that emerges from freshman dorms,” he said.

When asked what he likes the most about Carnegie Mellon, Masters replied that the people are what he finds are the most inspiring.

“The CMU student that’s geeky and proud — in my book, that means passionate about something. CMU is filled with people who are driven about one thing or another,” he said.

MacGillivray agreed. “You can’t go a day here without engaging in a conversation with someone that’s incredibly inspiring. From the first-years that I work with to upperclassmen, everybody is doing something cool or has a crazy idea — something that they’re so invested in. That pushes me to also be driven and invested in this campus,” she said.