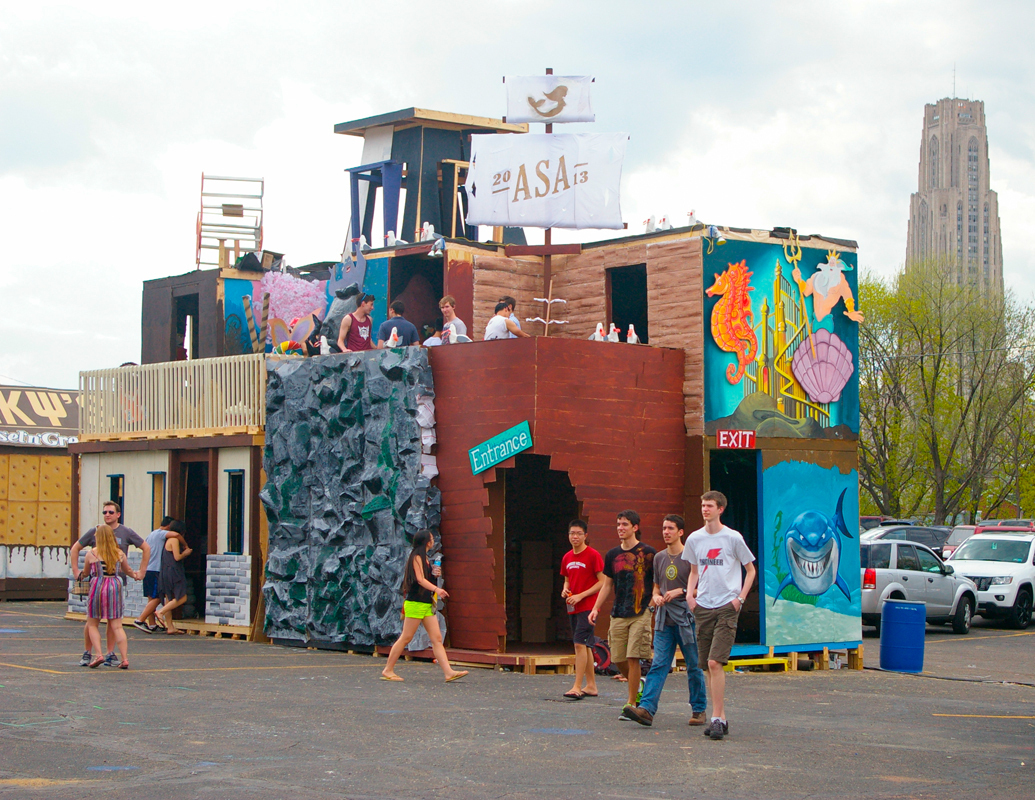 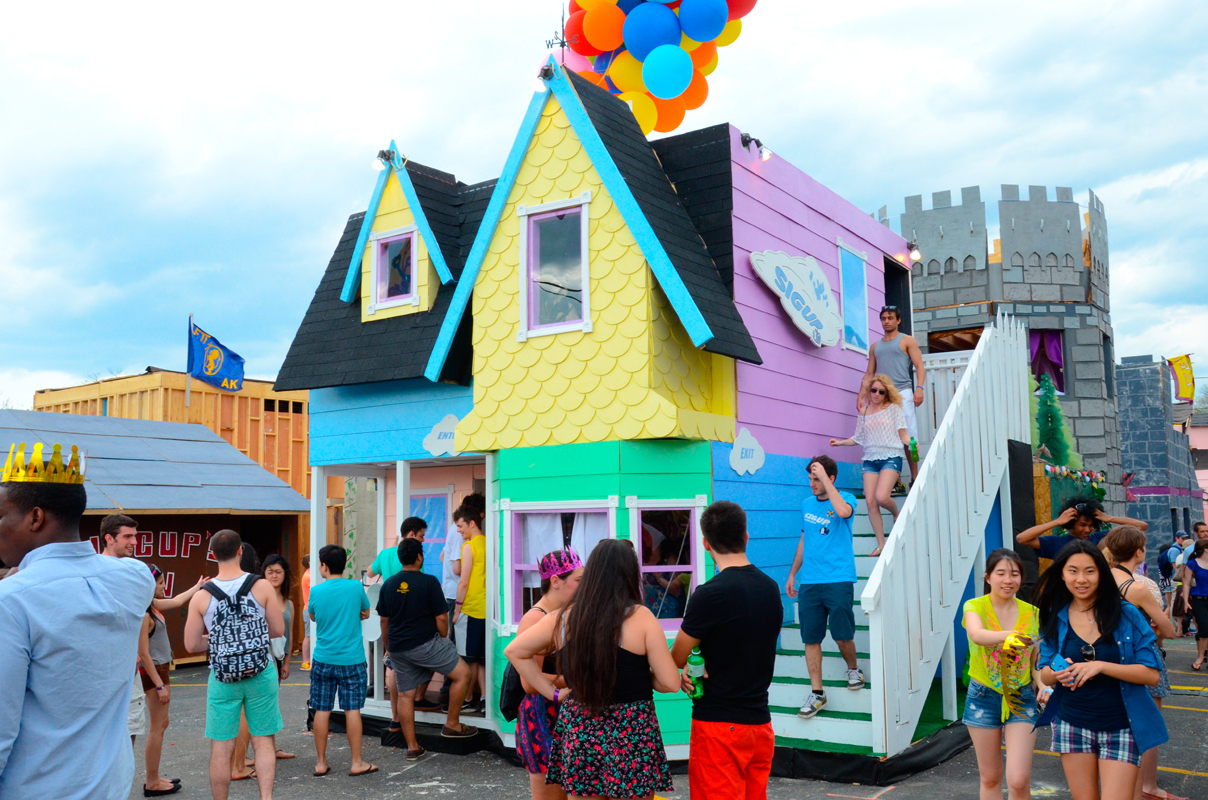 Sigma Phi Epsilon's "Sig Up," which won first place in the fraternity booth category, was based on Pixar's Up and featured a cluster of balloons tethered to the roof. (credit: Kate Groschner/Photo Editor) 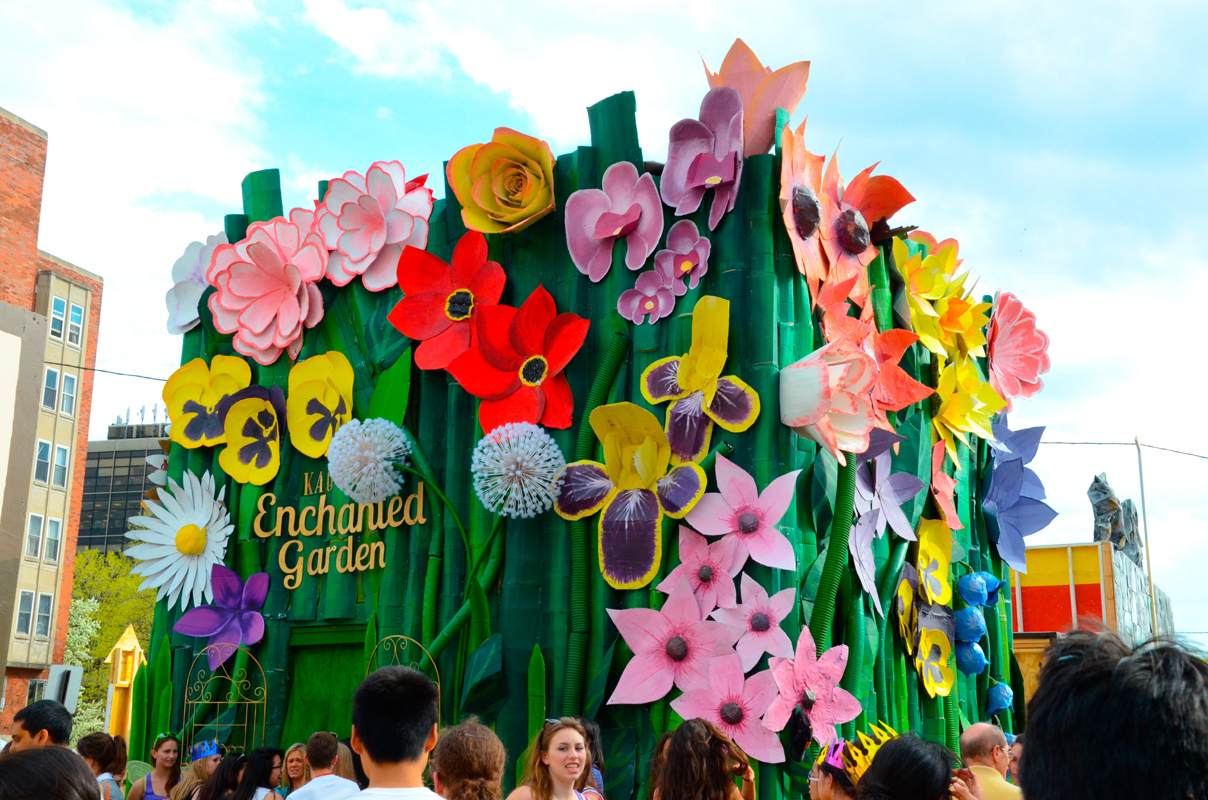 Throughout Carnival, as a self-designated, one-person committee, I went through every booth and selected the winners of several categories in what I call the “Boothy Awards.” This year’s booths, following the theme of “Fractured Fairytales,” again demonstrated the passion and dedication of Carnegie Mellon students. Without further ado, here is the first edition of the Boothies.

The Hipster Boothy for Best Design

Kappa Alpha Theta’s “Enchanted Garden” wins best design — a result of its grand and successful ambitions. While the enlarged flowers and dandelion puffs hanging on the evergreen exterior may have seemed over the top, they were consistent with the Thumbelina-inspired theme.

Inside, tour guides explained how the exaggerated sizes were the result of a spell that shrunk one’s body to the size of a thumb. If the outside showed that these women could think big, the interior displayed their ability to go small. A quaint lily pond was just one of many beautiful details in this enchanted forest. Papier-mâché trees and magical stalactites also made this booth feel larger than life.

The Pong Boothy for Best Game

This Boothy goes to KGB’s “Funkelstiltskin”. In this booth’s game, one dropped plastic golf balls into holes that activated different notes of the “Smoke on the Water” theme. The simple goal was to recreate the tune. But this was harder than it sounds. KGB wins this Boothy for a game that was moderately difficult and also displayed technological prowess.

The Asian Students Association (ASA) always manages to impress during Carnival, and this year was no exception.

If Pixar chooses to go old school and hand-draw the animations for the Finding Nemo sequel, it would be wise to draw inspiration from ASA. The incredibly detailed paintings of the Finding Nemo and Little Mermaid characters in the booth seemed to have been taken straight from the big screen, and the papier-mâché creations of seagulls proved that ASA is no one-trick pony.

The Andrew Mellon Boothy for Most Underrated Booth

Making a booth isn’t easy, especially for organizations that lack the financial resources and manpower of big fraternities and sororities. However, bigger is not necessarily better, as was made evident by SPIRIT’s “Pinocchio Story.”

This booth consisted of one room whose main feature was a comic strip that stretched across three walls. But it was a special comic — one that combined the stories of Pinocchio, Alice in Wonderland, and Toy Story. It was a delightful story that I didn’t have to wait on a line for.

KGB also deserves some recognition here. Half record store and half neon nightclub, its one-story booth combined the tale of Rumpelstiltskin with funk music. Though not all of the references were clear, KGB’s booth was very solid in terms of artwork and design.

Humpty Dumpty sat on a wall. Humpy Dumpty had a great fall and was rushed to the ICU.

Alpha Epsilon Pi’s “Humpty Dumpty Hospital” tells the part of the tale not included in the nursery rhyme. Although nobody could put Humpty together again, the men of Alpha Epsilon Pi reminded us that Humpty first had to be saved in a game of Operation.

From the Midway entrance next to The Underground, Theta’s “Enchanted Garden” booth immediately set the standard for the rest of the booths. As tall as it was, the detail of the exterior was even more impressive. However, the best booth, in my opinion, was 20 yards away, where a cluster of colorful balloons floated above Sigma Phi Epsilon’s booth based on Pixar’s Up.

After visitors were greeted by a papIer-mâché caricature of the grumpy main character Carl, the inside of “SigUp” was truly delightful. On the first floor, the wooden floor tiling and simple wallpaper brought the details of the Pixar movie to life.
Although this senior citizen’s home seemed very harmless, his journey was anything but. The interactive game inside the booth, in which the user steers through tumultuous clouds, serves as a reminder of the difficult journey his house went through.

The journey of the booth continues to the second floor, but not before a reconception of the movie’s waterfall scene next to the stairs. The top floor recreates the jungle setting of the film with real plants and dense foliage. This floor even features Kevin, the flamingo-like creature from the movie.

Though Kappa Alpha Theta’s was a close second, Sigma Phi Epsilon wins for its fine details and faithful representation of the beloved Pixar movie.

With that, we bring an end to this year’s Boothies. While it was a great year, not all booths made the cut — although this is not a reflection of their quality.

For people not involved in building booths, it is very easy to walk through a booth and see nothing special. But the fact is that these booths are made by full-time Carnegie Mellon students — students who want nothing more than to display their love for Spring Carnival.