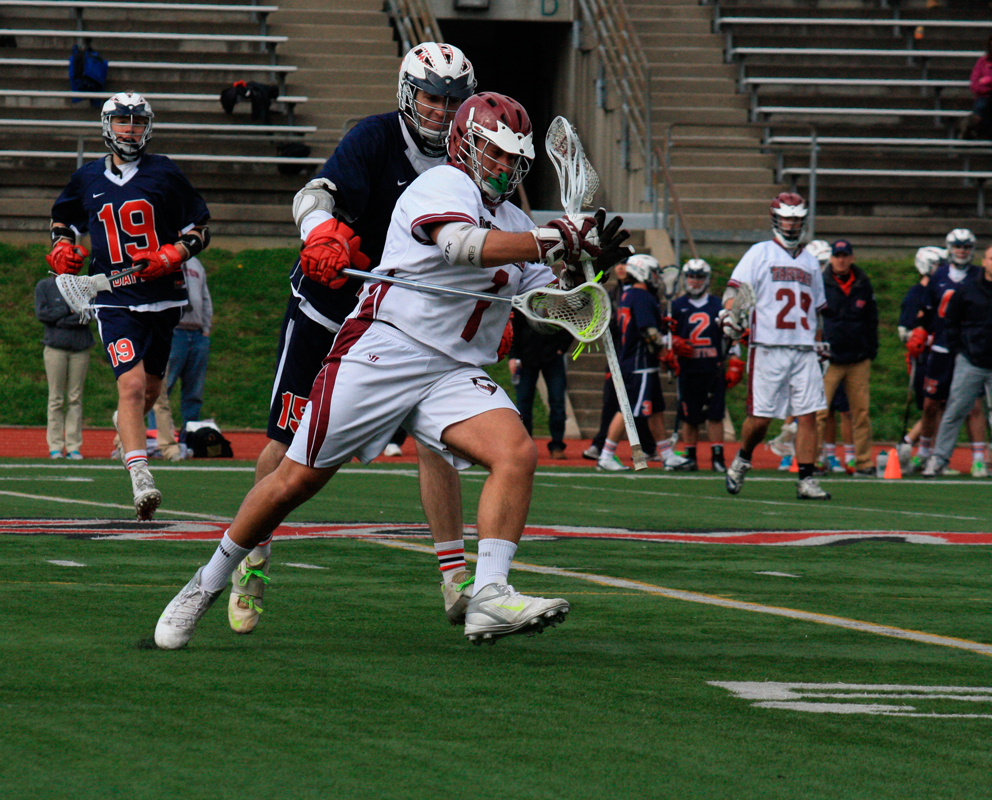 Senior midfielder James Komianos (No. 1) fights for position during Saturday’s game in Gesling Stadium against the University of Dayton. The matchup was the team’s second to last of the season. (credit: Kelsey Scott/Operations Manager)

The Carnegie Mellon men’s lacrosse team, which has experienced numerous setbacks and difficulties this season, lost to University of Dayton last Saturday 18–1 at home. Still, the team is keeping its head up and hoping to finish Wednesday’s game against Grove City College — the last game of the season — on a high note.

The main obstacle for this season has been a loss of experienced players.

“From last year to this year we lost six starters, and we also lost our head coach, so basically the obstacle was starting over with a new team,” said junior Kevin Malcolm.

Junior leader Craig Matturro agreed, saying, “Our season this year has really put the team and program through its trials.”

The loss of a head coach was particularly significant for the team.

“[Our] head coach ... stepped down a few weeks before our first game due to his personal life,” Matturro said. “It was at this time when myself and other leaders on the team realized how much the head coach meant to the team — not just for practices and games, but for doing a lot of the behind-the-scene things we were unaware of.”

Fortunately for the team, the assistant head coach stepped up to take a much more meaningful role for the organization.

Other issues include the team’s small size and limited practice opportunities. Matturro explained, “Our opponents are teams that typically boast rosters of 25 or more players that practice five times a week.... In a 60-minute game played on an entire football field, it is hard to compete with a 16- to 18-man roster that only gets enough field time for two practices a week most of the time.”

The team also did not get in much practice time before winter. “We’re pretty much a new team, and we didn’t really play in the fall,” Malcolm said.

The team, with a season record of 0–6, has suffered problems on the field as well.
“Pretty much we just need to be organized and know what we’re doing on plays, so organization and communication issues [have hurt us],” Malcolm said. “A lot of the goals that have been scored against us [happen] when we’re disorganized.”

The team was hoping to pull out a win at a scheduled home game against Butler University on Sunday, but the squad from Butler was unable to come to Pittsburgh.
However, the team is staying positive.

“Spirit and team morale has not been harmed in any way,” Matturro said. “One of the best qualities of the team is that everyone is out there to compete while having a great time.”

He continued, “This is really what club sports is about, and the men’s lacrosse team embodies it fully. It’s a great group of guys who have fun competing in what I think is one of the most exciting games out there.”

The team’s next game — the final matchup of the year — is at home Wednesday against Grove City College. While Grove City is a strong squad, having beaten Dayton two weeks ago, the Carnegie Mellon team is still hopeful.

And, though the season is almost over, Matturro has high hopes for next season, during which the men’s lacrosse team is aiming for greater unity and teamwork to start the new season out strong.