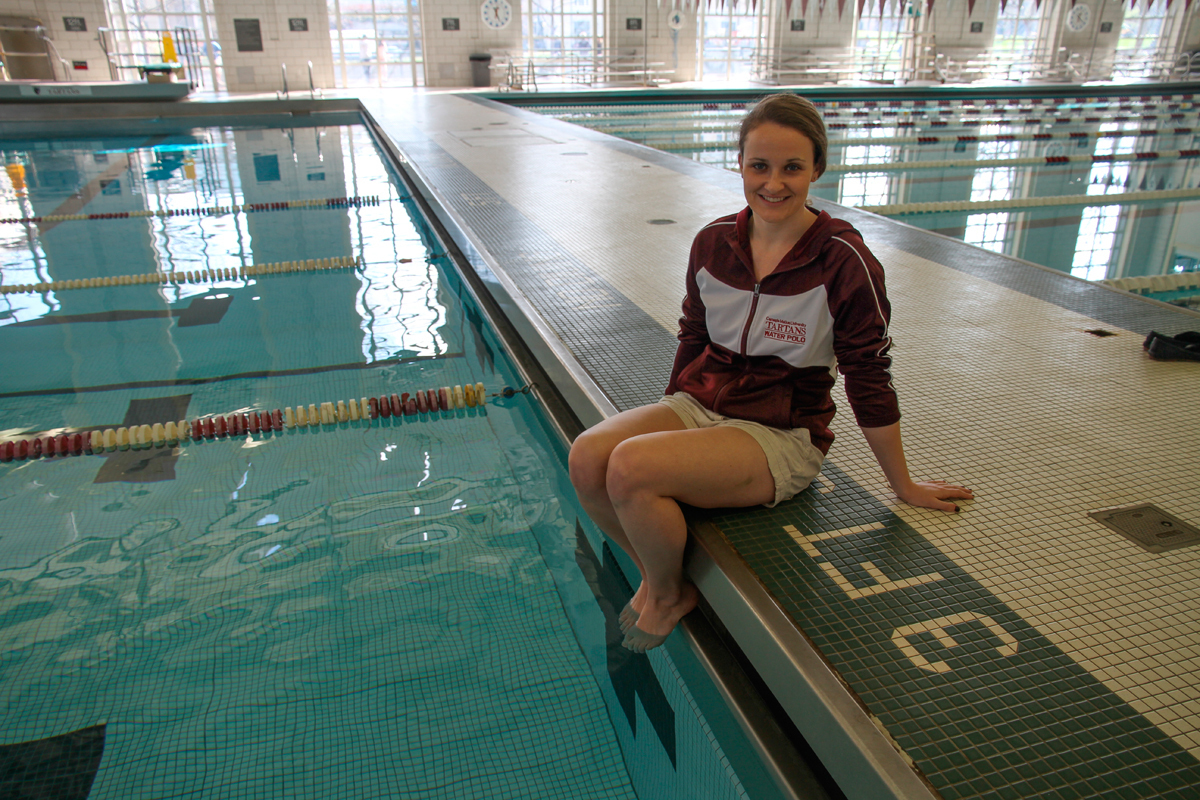 Master’s student Alice Tripp has been a member of the women’s water polo team since it was founded in 2009. (credit: Jonathan Carreon/Contributing Editor)

The cheer “TARTANS! WHAT IS YOUR PROFESSION?” can often be heard loud and proud from Carnegie Mellon’s swimming pool, delivered with gusto by the women’s club water polo team. Though a relatively new sport to campus, women’s water polo has grown and expanded significantly in recent years, led by the positivity and dedication of Alice Tripp, a master’s student in public policy and management.

One of the most seasoned players on the team, Tripp has watched the team “consistently move up in the league rankings and slowly declare its presence,” she said.

Water polo requires endurance and strength, as players tread water in a game similar to land-based handball.
Tripp has excelled and specialized in playing hole set and right wing. In water polo, the offense often revolves around the hole set player. Because this player has the most desirable shooting and passing position, she is often the most heavily guarded as well.

“Hole set definitely requires a lot of experience and knowledge of the game,” said junior Erica Moore, the club’s president.

Tripp fulfills a definite need as a right wing player since she is left-handed, allowing her to shoot from a unique angle; she “helps immensely, since the rest of us are right-handed,” Moore said. “We rely on her pretty heavily as both a player and leader.”

Women’s water polo is a club sport in the competitive Collegiate Water Polo Association. The club holds practices all year, three times a week, although its competitive season is in the spring. In addition to practices, the team often holds scrimmages with the University of Pittsburgh team. The women’s team shares its Thursday practices with Carnegie Mellon’s men’s club water polo team.

“We love going to Late Night with the men’s team and getting to know them too,” Moore said.

This year, the team finished off its season last week with a 4–8 record and were seventh in the league.

“The championships went well and showed off just how much we improved,” Tripp said. “We definitely knew what we were doing.” For her, this was a “huge accomplishment, considering it was a rebuilding year where we were teaching most of the girls the game.” In contrast to many of the other teams in their league, the Tartans lack experience. “Most of our girls had never played before college,” Tripp said.

Since the team does not have a coach, the team members often rely on coaching themselves. “Alice gives us tons of feedback on our playing,” Moore said. “She’s truly a core player in every aspect.”

Tripp began her water polo career as a first-year at Carnegie Mellon, playing for the men’s team. Originally from San Francisco, Tripp said that “polo reminds me of home. Water polo is huge in Cali.” In the spring of 2009, the women’s water polo team was formed.

“We have come such a long way from having to host bake sales every other weekend,” she said. “I am just so proud to now have full practices with such a fun and dedicated group of girls. I love both the competitive aspects and our camaraderie. Everyone is here to have fun and work hard.”

“Everyone on the team is so welcoming here,” Moore said. “Alice especially is so energetic and is truly someone we all look up to as both a player and a leader.”

Moore said that Tripp is a “very positive and energetic teammate” who always greets players with a “good morning, sunshine!” and constantly entertains with trivia and stories, both polo and non-polo related.

Her dedication to the team stems from a true love for the sport. “For me, water polo is such a contrast from my daily routine. It’s high energy, and a release from all the schoolwork,” Tripp said. “Most importantly, it’s fun.”

When not releasing her stress in a polo match, Tripp also remains heavily involved in Carnegie Mellon’s chapter of Habitat for Humanity.

“Alice literally seems to do everything,” Moore said. “She’s been a huge inspiration for me and the other girls.”

Tripp’s studies in public policy and management will take her to Washington, D.C. next fall, where she plans to take classes at the Heinz campus and work for the National Oceanic and Atmospheric Administration in the climate program office. “It’s going to be really hard next year without Alice,” Moore said. “She’s always been there and was truly the backbone of the team.”

For now, Tripp savors her last months in Pittsburgh as she responds to “TARTANS! WHAT IS YOUR PROFESSION?” with a final “AAH-OO! AAH-OO! AAH-OO!”

“Some say that our cheer is even more manly then the men’s team,” she said.