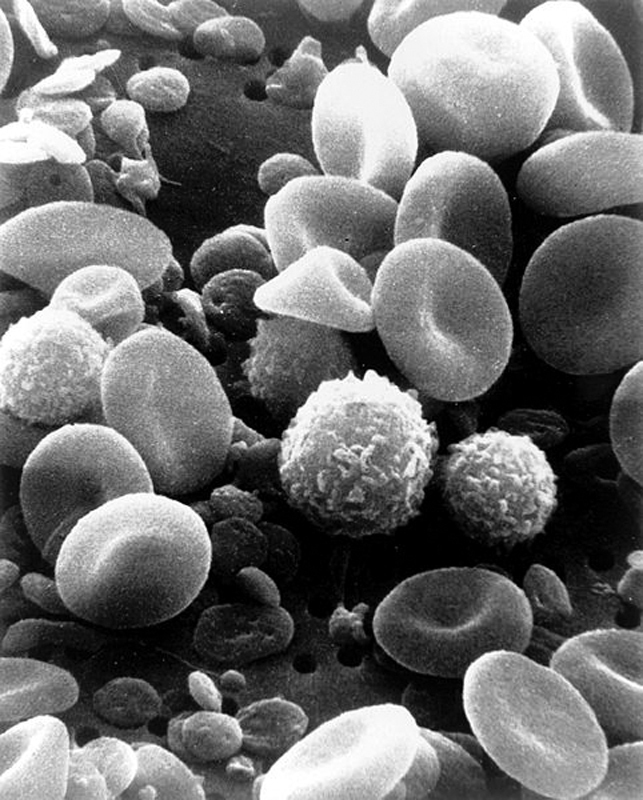 Scanning electron microscopes use electrons to view microscopic molecules. Above is an SEM image of a blood sample. (credit: Courtesy of Wikimedia Commons)

Anyone who has taken a college-level course in biology is familiar with the strange black-and-white pictures of what most people would think are impossibly small bacteria. Up until the 1950s and the invention of the scanning electron microscope (SEM), they were.

Ever since then, biologists have had great insight into the realm of the incredibly small, allowing scientists to analyze surfaces and do research in several different fields that were never have thought possible. The SEM has allowed them to have new insight into the structure of cellular-level biological structures as well as analyze the structures of materials applied in engineering.

The basis of this technology lies behind the fact that SEMs use precisely controlled electrons instead of light to look at samples.

According to the Radiological and Environmental Management website at Purdue University, the electrons are first shot from an electron gun at the top of the apparatus; these initial electrons are of very random energy and do not have very much control. These electrons then pass through many different energetic potential differences and magnetic lenses that slowly refine the speed and direction of the electrons. This eventually translates to controlling the area and resolution of the sample. For example, if the electrons are distributed over a very small range and are very highly concentrated, the resolution of the picture will be very high. This allows researchers to see samples at up to 500,000 times magnification — about 250 times stronger than the strongest light microscopes.

The way we “view” the image, however, is very different than a normal microscope. A light microscope simply magnifies and enhances the light reflected off a sample by a lamp through an optical lens. In the end, it is still the human eye, or in some cases a camera, that is doing the “viewing” of the sample. Since the SEM uses electrons to probe the sample, we can’t see anything visually. However, we can moniter the electron’s interactions within the sample.

To understand this interaction, it’s important to comprehend how the samples are prepared. Because the area of observation in the SEM is a vacuum — ensuring that the electrons don’t interact with anything else before the sample — biological and otherwise fragile samples must be carefully dried so that they do not collapse. These and other samples that are nonconductive are then put in a special machine that coats the entire sample in a thin layer of gold. This allows for all samples to be conductive so that they may interact with the electrons fired at them.

The main method of this interaction is a process called Compton Scattering. In this process, electrons collide with atoms and other electrons in the conductive material. When the electrons do this they either accelerate around the collision and move off in a different direction, scatter backward, or move relatively easily through the sample (this last possibility is very unlikely).

Due to the properties of accelerated electromagnetic charge, the electrons that collide then emit high-energy photons or X-rays. These X-rays, along with the secondary electrons and back-scattered electrons, are what the computer is able to detect. Many different detectors within the machine that surround the sample then analyze all of the different kinds of debris. These detectors then send the gathered data to a computer, which interprets it and creates an image, giving insight into the micro-microscopic world.