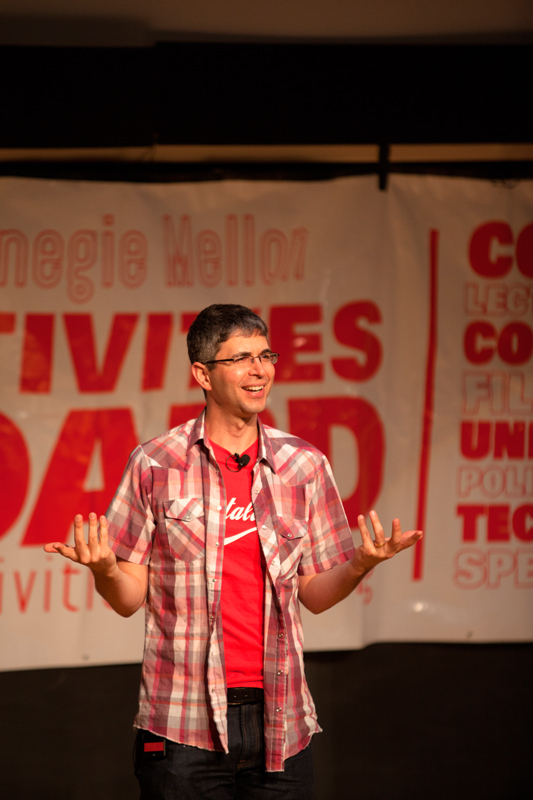 Yoram Bauman describes himself as the “one and only stand-up economist.” (credit: Jonathan Leung/Assistant Photo Editor)

McConomy Auditorium was about half-full with students and faculty members last Tuesday afternoon. Despite the mixed ages and ethnic backgrounds, one thing these attendees had in common was their interest in economics — and of course, in comedy. But then, who wouldn’t be up for a good, educational laugh over intelligent jokes? After all, we go to Carnegie Mellon.

Cheers and applause went to Yoram Bauman, who called himself “the world’s first and only stand-up economist.” Bauman graduated with a B.A. in mathematics from Reed College and went on to the University of Washington for his master’s degree and Ph.D. in economics. His goal is to “spread joy to the world through economics comedy; to reform economics education; and to implement carbon pricing — preferably through a revenue-neutral tax shift involving lower taxes on things like working, saving, investing, and higher taxes on things we don’t like (e.g. carbon).”

From his introduction until the very end of the show, Bauman was constantly in character. He did not let the fear of offending someone get in the way of his jokes. For example, he started the show by showing off his capitalism shirt he bought in China. The political irony immediately captured the crowd’s attention.

He went on to share his experiences from his recent visit to Beijing. Bauman roused further excitement with his Chronic Hyperinflation in Hell theory drawn from Chinese belief, explaining it as a “drastic increase in money supply which we called ‘M4.’ ” The crowd loved the intelligent pun and correlation to economic money measurements “M1,” “M2,” and “M3.” His explanation of the Chinese tradition of burning joss paper for their ancestors — and how that causes hell to be filled with money — struck a chord with the culturally diverse audience.

Bauman later incorporated one of our favorite technologies of the day — apps — by exploring the new way of transferring money. His punch line was definitely one to stick: “There’s an app for everyone — even the dead ones.” He went on to jest about how Chinese tradition believes in magic and Social Darwinism, but not Darwinism.

Bauman then poked fun at the contradictory Singaporean policy of calling themselves liberal, when at the same time, the government has its fingers at everybody’s throats. “ ‘Uh-oh, be careful. Don’t talk about politics, race, religion, the government, or people named ‘Lee.’ Don’t say anything that might offend anybody,’ ” the comedian said, quoting the Singaporeans he had encountered.

Later on, Bauman talked about his own career and about how he got to where he is now. “I’m a little embarrassed to say that my video has recently just got a million hits,” he said. “It’s surprising ‘cause I’m not a Korean pop star or anything.”

Some of Bauman’s last jokes involved his explanation of different perspectives from varying types of economics through “S*** Happens.” He first made the distinction between microeconomics ad macroeconomics. The former stresses that the price of “s***” is determined by supply and demand; the latter simply expresses, “Oh, s***!” He went on to define classical macro, Keynesian macro, neo-Keynesian macro, neoclassical synthesis, econometrics, environmental economics, supply-side economics, behavioral economics, and the Australian School of Economics.

“People always wonder why economics always seems so confusing,” Bauman said. “It’s because they do not want you to figure out that the entire economy is empty.” Though Bauman makes fun of economics and the system a lot, it takes someone knowledgeable and familiar with the field to make one-tenth of the jokes and comments that he made.