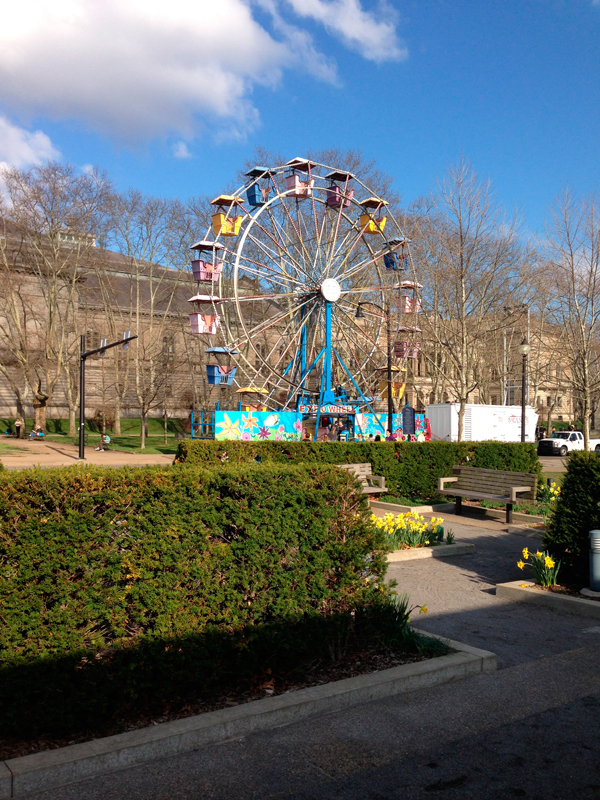 The Ferris wheel was one of the only carnival-like attractions featured at last week’s Celebrating Oakland festival in Schenley Plaza. (credit: Nikita Mishra/)

If you happened to walk past Schenley Plaza last Friday, you may have wondered why there was a Ferris wheel and other festivities present.

Although the description of the event boasted activities such as a food tour, carnival rides, and live entertainment, the majority of them did not seem to be present at the actual event. The only carnival ride was one Ferris wheel, and there was no food, unless you count the decorated dog biscuits being sold by one vendor.

In addition, it was difficult to tell whether the marching band from Pitt was practicing on the side, or part of the event. Regardless of its reason for being there, the Pitt marching band appeared to be the only live entertainment present.

Although there was not much to do, a decent number of people showed up to the event. It was nice seeing families out together and enjoying the agreeable weather.

It was also interesting to talk to the vendors and see what they were selling. In addition to the table with decorated dog biscuits, there was another vendor selling custom jewelry and another with an array of colorful scarves. These tables all featured locally made items and attracted quite a number of people.

Upon speaking to some of the vendors, it became clear that the event was actually a trial run for the actual Celebrating Oakland festival that will occur next year. Next year is Oakland’s 175th birthday, and the celebration is supposedly being planned on a much larger scale.

Friday’s event was the first of its kind, which may better explain why it was poorly organized. If this year’s Celebrating Oakland was in fact a trial, there are many changes that should be made to make it less confusing and more of a celebration, as its name suggests.

One of the more important changes that should be made is to the description of the event. This year’s festival could not be any more different from how it was described, so the next event should stick to the description. Additional activities and live performers would definitely be beneficial and could attract significantly more people than it did this year.

As the description of the event suggests, the goal of Celebrating Oakland was to bring the residents of Oakland together; the turnout for this year was an indication that better organization could make next year’s actual event memorable for the entire community.