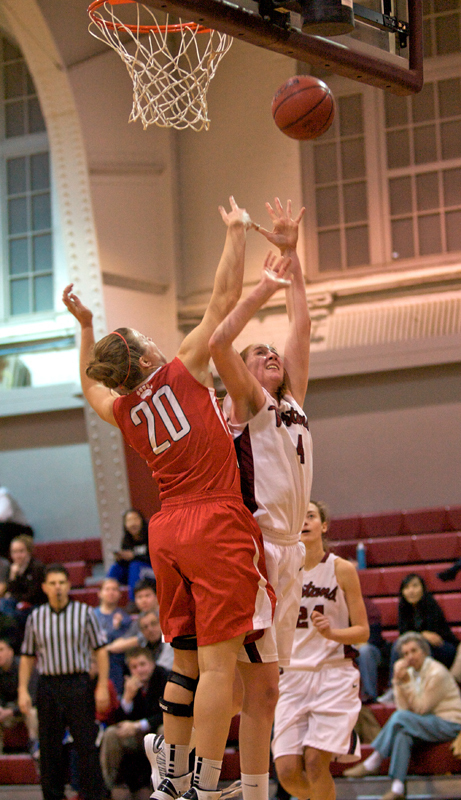 The Carnegie Mellon women’s basketball team finished its season at the Eastern College Athletic Conference (ECAC) South Championship last Wednesday with a 94–80 loss to the Juniata College Eagles (19–8). This was the first time the Tartans have made it to the championships since the 1999–2000 season, and marking an end to the first winning season in 10 years. The Tartans’ final in-season record was 13–12.

In the week prior to the ECAC Southern Championship, the Tartans suffered losses at Case Western Reserve University and Emory University. But these losses were hard-fought battles. At the Feb. 23 game against Case Western, the Tartans had a 22–10 run in the first half, with senior Emily Peel leading with a high shooting percentage.

This is typical of Peel, who finished the 2013 regular-season campaign averaging 13.9 points and 8.2 rebounds per game. She also posted 30 blocks for an average of 1.2 a game to lead the team in all four categories.

Peel closed the regular season with a national ranking of eight in field-goal percentage, shooting at a 56.6 percent clip. With the first-team selection, Peel becomes the fourth Tartan to earn two or more University Athletic Association (UAA) first-team honors.

Peel was also a great asset for the Tartans, shooting a season-high 27 points. She is currently the fourth leading scorer in school history with 1,203 points and the seventh leading rebounder with 721 points.

“This season was awesome. To have the first winning season in a decade and to make it to ECAC’s was amazing. We have come a long way and this is only the beginning of the success I know the team will have,” Peel said. “It has been great to be a part of the CMU women’s baskeball program and I have really enjoyed getting to know such an awesome group of people.”

Following their loss at Case Western, the Tartans headed to Juniata and the ECAC South Championship last Wednesday. Juniata started off strong and gained a 14–0 lead in the first three minutes, continuing their dominance with the biggest lead of the half with a score of 28–9. Eagle junior Jordan Hileman was a major player, earning the majority of the points for the opposing team in this half.

The Tartans fought back to reduce the deficit to seven points with four minutes left in the first half.

First-year Lindsay Poss stepped up for the Tartans and shot a three-pointer and two baskets in a row to make the score 39–32 in Carnegie Mellon’s favor.

At the break, Peel had scored 15 points and Poss scored 11, while senior Jordan Speck dominated for the Eagles with 19 points.Speck made the last three-pointer of the game, giving the Eagles a 57–42 lead over the Tartans.

They continued their shooting streak with a 48 percent average for the second half, leading to the final score 94–80 in the Eagles’ favor. The Eagles only made one more shot than the Tartans, but they made more many more three-pointers than did the Tartans.

Poss made a career-best finish, a total of 20 points.

First-year Liza Otto also received honors as by making the UAA second-team, becoming the first Tartan first-year to make the second-team since the 2008–09 season.

Overall, the Tartans do not dwell on their loss in the championship, but rather look at the successful season with feelings of accomplishment. These feelings of pride and achievement are especially strong for the graduating seniors.
“It’s very strange to think ‘Wow, these four years are over,’ ” senior Tori Baggio said. “But I really enjoyed this season and think we accomplished a lot. We have a great group of girls, and I’m excited to come back as an alum to see them do even greater things.”