No one leads men’s club volleyball team quite like Gaston 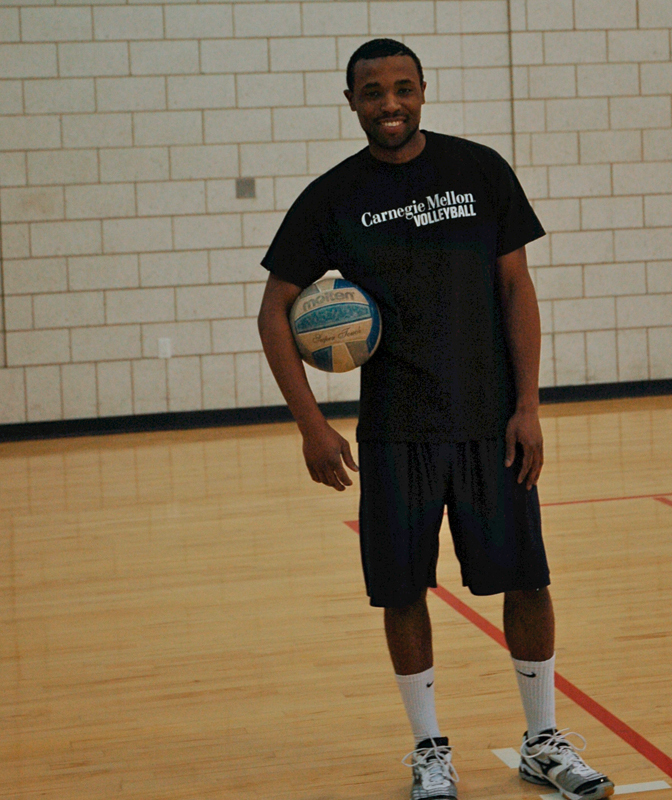 Taylor Gaston has been an excellent leader of the men's club volleyball during his time at Carnegie Mellon. (credit: Kate Groschner/Photo Editor)

Senior mechanical engineering major Taylor Gaston has been part of the men’s club volleyball team since his first year and is hoping to wrap up his illustrious volleyball career at Carnegie Mellon on a high note.

Gaston has been a standout outside hitter and captain on the club for four years, and has also been heavily involved as the manager of the varsity women’s volleyball team.

The Harrisburg, Pa. native says that “[the team has] gone through a rebuilding phase, but we’ve gotten a lot of younger guys as the team has progressed.”

Gaston has excelled in his position as a captain. First-year Daniel Lee said, “Taylor has been a really strong captain because he’s a role model who leads by setting an example, both on and off the court.” Lee added, “He’s incredibly supportive and consistently looking for ways to improve your play.”

Entering the season, Gaston hoped that “we would get out of the rebuilding phase and that we would be more strict, committed, and involved.”

In Gaston’s eyes, much of this initial goal for the season has been accomplished. The team is 4-3 this season, with a final win in two games against Robert Morris University.

The men’s volleyball team is in the Penn-Ohio Volleyball League (POVL), competing against local teams including the club team from the University of Pittsburgh.

The team has nevertheless faced countless challenges this year, with the most pressing being less-than-desired levels of involvement from the players. Gaston said that it is “hard for us to get as much participation and commitment as we’d like due to demand in other areas of life, especially academically.” The team practices twice a week, and often travels to other schools for matches.

Still, Gaston boasts that the team, led by coach and assistant professor of chemistry Kevin J. Noonan, is “better than it has been during the past two years.”

Sophomore teammate DJ Begos said, “[Gaston’s] always getting us excited on the court, and he’s just a leader. He always helps at practice and tells us things to work on. Him, [team president Alex Campbell], and our coach all help, and are really good leaders.”

Outside of the court, Gaston said that he simply enjoys hanging out with friends and playing other sports. I also really like to eat and try out different restaurants.” Being a Pennsylvania native, Gaston also enjoys travelling to other schools and exploring other academic institutions.

After graduation, Gaston plans to enter the work force as a mechanical engineer.

He is also an active participant in the university intramural sports leagues, engineering groups on campus, and is a brother of the Pennsylvania Rho chapter of Phi Kappa Theta.

Gaston uses volleyball as a break from the challenging engineering coursework and the busy college lifestyle.
“It was at first hard to juggle academics and athletics, but there’s definitely time to get work done,” Gaston said. “When there are only a few things that you like to do other than hanging out with friends, [volleyball] is definitely a great outlet from the stress.”

Even before coming to Carnegie Mellon, Gaston was in correspondence with the president of the volleyball team, and quickly became integrated into the team environment.

Based on his experience in joining the team, Gaston encourages any students who are unsure of joining a group like the volleyball team to “take that first step and be outgoing; you will definitely be accepted with open arms.”

“Taylor’s been our vice president for the past two years, and he’s also been our on-the-floor captain,” team president Alex Campbell said. “He’s the spirit of our team. He’s the one who always gets people motivated and gives speeches, and gets us up when we’re down. He’s very vocal and really excited all the time, which is great to have on the team and great for a captain to be.”