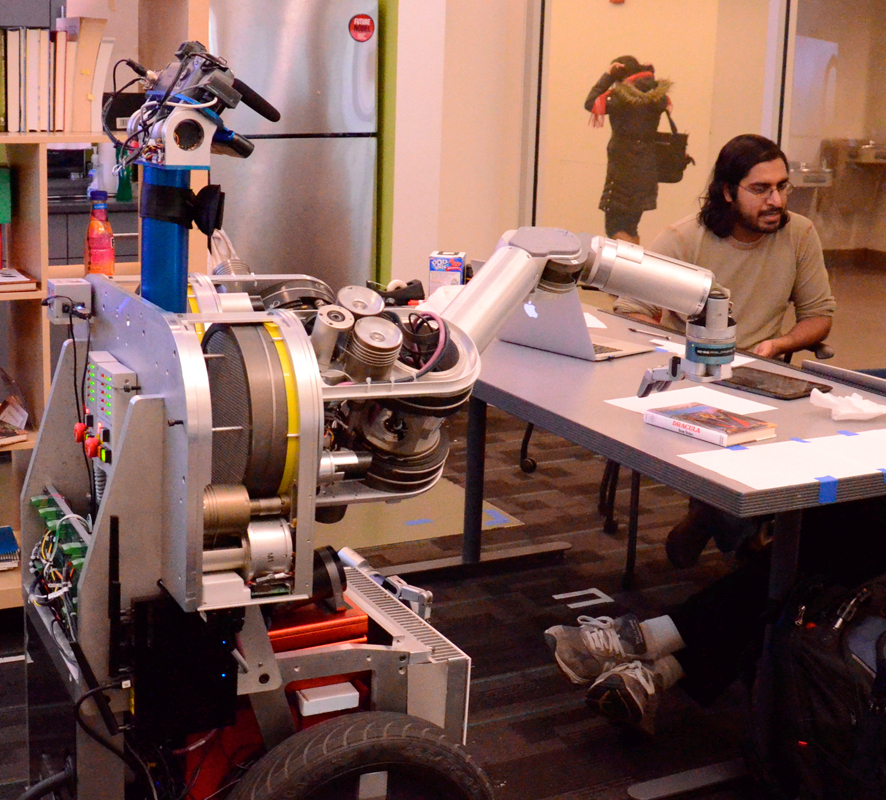 HERB attempts to pick up a book with Velagapudi standing by. (credit: Kate Groschner/Photo Editor) 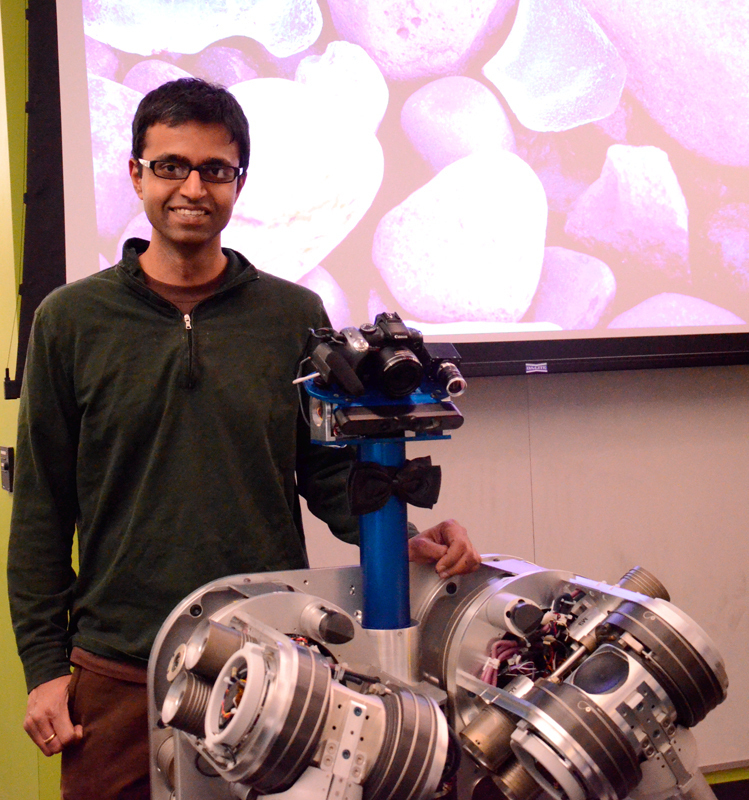 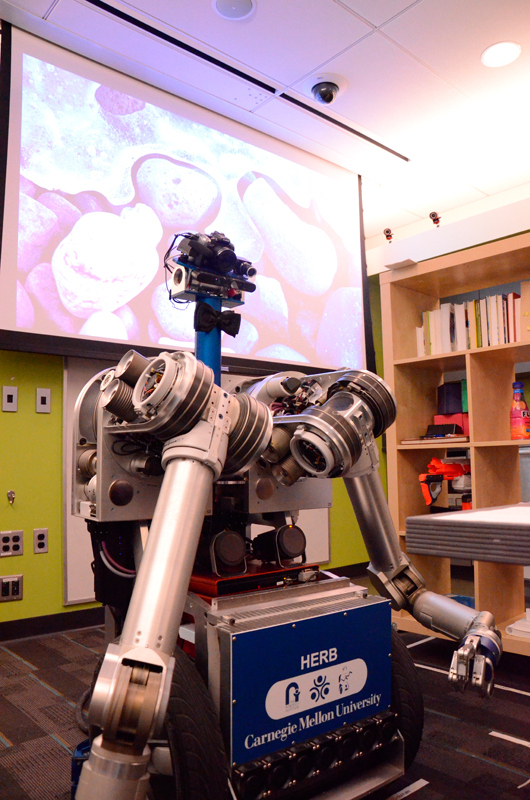 HERB — the Home Exploring Robot Butler — can often be seen through the glass walls of the Personal Robotics Lab in Newell-Simon Hall picking up iced tea bottles or taking books off a bookshelf. Complete with fingernails and a British accent, HERB is the perfect caregiver: He can open doors, microwave meals, and even separate an Oreo cookie from its cream.

“The focus of the Personal Robotics Lab is physical interaction with the world — opening doors, picking up objects, cleaning,” said Siddhartha Srinivasa, director of the lab and associate professor in the Robotics Institute. “The focus is on complicated manipulation tasks with a lot of uncertainty and a lot of clutter. If you look at a factory floor, robots can do magical things. But if you look at a home — at least my home — it looks nothing like a factory floor. So we’re trying to get robots like HERB to move from the factory floor to homes so they can perform useful tasks that a caregiver would perform.”

When Nabisco first approached Carnegie Mellon and requested an Oreo-separating robot for its “Cookie vs. Creme” campaign, Robotics Institute project scientist Prasanna Velagapudi’s initial reaction was, “If there was going to be a robot that could do this, it would have to be the Home Exploring Robot Butler. I mean, that’s exactly what you’d want a butler for, right?”

Srinivasa was enthusiastic about the challenge’s potential for public outreach. “We’ve always struggled to get technology and robots to be appreciated and understood by people other than scientists,” Srinivasa said. “It’s a cool robot and we want everyone to know how cool it is.”

However, he admitted that in the beginning they did not know if HERB had the precision and dexterity to actually separate an Oreo cookie. “It would be like having a giant football player wearing winter gloves trying to manipulate a tiny Oreo,” he said. “It was by far the most fragile, delicate, small, sensitive object we have ever manipulated.”

Nevertheless, HERB rose to the challenge and starred in what is now a widely circulated YouTube video documenting the robot’s success in separating an Oreo’s cookie from its cream. Not only is HERB the only research robot to have ever completed the task, but the process through which its algorithms were improved to separate an Oreo resulted in the creation of new tools that will be useful in completing other tasks in the future.

“The true color of a good algorithm,” explained Srinivasa, “is that it is very generalizable. HERB can get a meal out of the fridge, microwave food, clean up after a mess, and separate an Oreo. The underlying algorithms are the same across all these tasks and are even generalizable across robots.”

Velagapudi described the Personal Robotics Lab’s goal as building up libraries and algorithms that are not just specific to individual tasks, but can be applied to a broad range of activities. “We see each task not as something we have to design an algorithm specifically for, but more like points in the space of solutions that we should be able to cover,” he said.

Despite HERB’s technical capabilities, he still needs to work on his manners. “One of the things that we’ve noticed is that we spent five years on improving capability, but people are still hesitant to accept robots in their homes. It’s not just about capability — it’s about behavior, how situationally aware it is, and how sensitive it is to your own personal space,” Srinivasa said.

The Robotics Institute works with the Human-Computer Interaction Institute to study what robot designs users find most acceptable. “The Oreo demo gave us an opportunity to play around a lot with HERB’s expressiveness,” Velagapudi said. Walking up and down the hallways of Newell-Simon Hall and putting his hand on Srinivasa’s shoulder at one point, HERB certainly seemed like a very friendly robot.

Srinivasa envisions a future where robots in the home will be more common. “The amount of technology we have now in our homes is more than what the biggest research labs had 25 years ago, so I think it’s inevitable that we’re going to have more and more automation,” he said. With HERB paving the way, personal robotic butlers are no longer a part of science fiction, but a reality that is currently being developed on Carnegie Mellon’s campus.