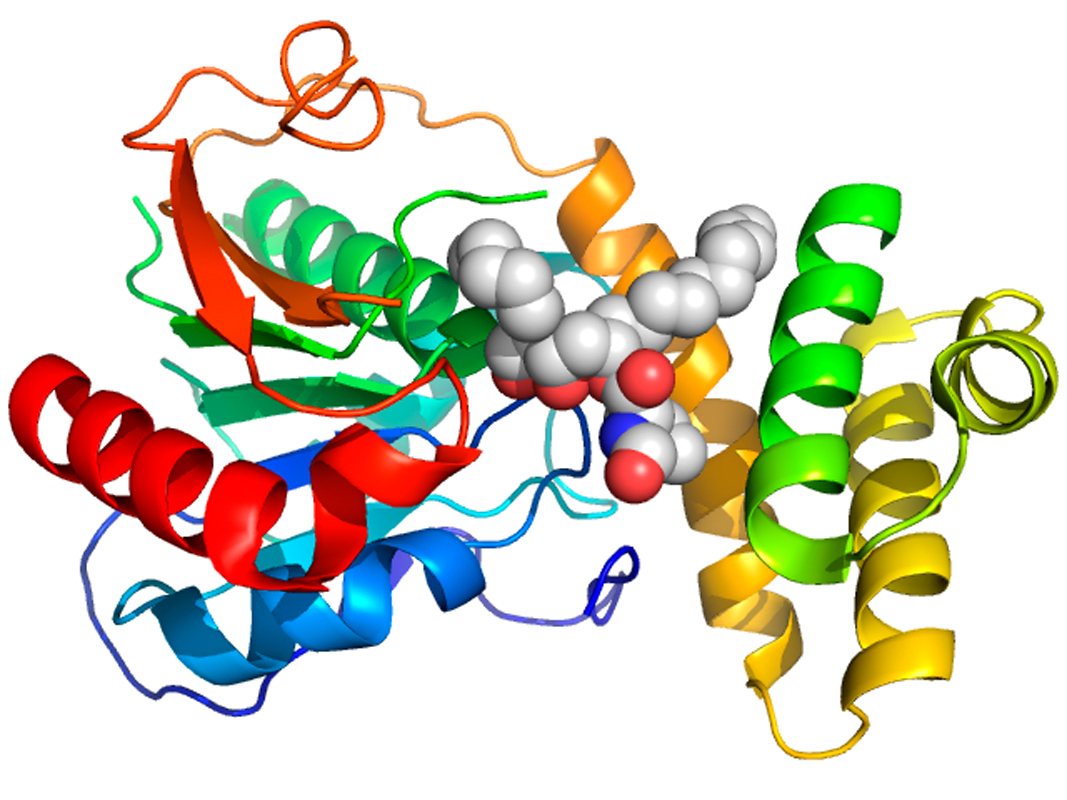 Matyjaszewski’s lab works with macromolecules like shown above. (credit: Courtesy of Wikimedia Commons)

From cosmetics and adhesives to potential medical devices, Krzysztof Matyjaszewski has made his mark on the field of chemistry and the world.

Matyjaszewski, the J.C. Warner Professor of the Natural Sciences in the Mellon College of Science, has recently been awarded the AkzoNobel North America Science Award. He is the inaugural recipient of the honor, which is jointly presented by the American Chemical Society (ACS) and the paints and coating company AkzoNobel. The award comes with a prize of $75,000.

Matyjaszewski’s research focuses on polymer, or “molecular,” chemistry. One of his largest contributions to the field has been the development of atom transfer radical polymerization (ATRP). ATRP is helpful to chemists because it can allow them to build complex polymeric materials from building blocks, known as monomers, piece by piece. The process allows chemists to use a catalyst to add a few monomers together at a time, eventually creating a complex polymer.

ATRP was conveniently created during a time when chemists were searching for an easier way to create polymers. Technological limitations made it difficult to build specific and uniform polymers, and chemists were looking for a possible way to control radicalization to create the polymers in a less expensive manner. Matyjaszewski published the paper on ATRP in 1995. The process took off, as it only required typical laboratory instruments.

Additionally, his use of catalysts enabled the process to be shut down and restarted just by adjusting controls such as temperature. His 1995 paper has had over 3,000 citations, and scientists have used his method to create products as diverse as cosmetics and inkjet printing.

As director of Carnegie Mellon’s Center for Macromolecular Engineering, Matyjaszewski has written 17 books, 80 book chapters, and over 770 peer-reviewed articles. According to a university press release, Matyjaszewski has been cited over 50,000 times during his career.

Matyjaszewski, who has received numerous other awards, will be officially honored for his achievements at the ACS 245th National Meeting and Exposition, which will be held April 7–11 in New Orleans.

David Brumley has recently been named the Gerard G. Elia Career Development Professor in the department of electrical and computer engineering (ECE). Brumley, who received his Ph.D. from Carnegie Mellon in 2008, also has positions in the computer science department and Carnegie Mellon’s CyLab.

Brumley’s research focuses on the areas of computer security, applied cryptography, program analysis, compilers, and verification. “My goal is to make computer software and systems safe,” Brumley said in a university press release.
“Attackers only need to find a single flaw to break into a system. Defenders have the much harder job of plugging all holes,” he added.

In his pursuit of safer computing, Brumley has focused some of his research on computer privacy. According to Brumley, there is currently an impasse in the world of computer privacy: Users wish to remain anonymous for fear of having a stolen identity, and service providers need a way to track accountability to protect against abusive users. Brumley and his colleagues’ goal is to develop a system that would allow users to understand exactly when their identity would be revealed.

To solve this problem, Brumley has based his research on the idea of contracts. When users accept a contract, their identities are placed in an server that runs a program called Flicker. Flicker proves to both the user and service provider that the user’s identity will be revealed only if the user breaks the contract. This solution is designed to be fast and fair to the user.

In addition to his security research, Brumley teaches multiple courses in the ECE department, such as Introduction to Computer Security, and is the mentor of Carnegie Mellon’s Capture the Flag team, which has won three international competitions. Capture the Flag is a computer security game where a team of competitors solve a series of problems to determine a source key of information.

“David Brumley is widely regarded both on campus and in the wider community for his cutting-edge contributions to addressing the challenges associated with computer malware as well as his dedication to teaching. His commitment to teaching and demonstrated leadership inspires our students to become world-class problem solvers,” said Ed Schlesinger, the David Edward Schramm professor and head of the department of electrical and computer engineering, in a university press release.

Brumley also contributes some of his success to the environment at Carnegie Mellon. “I am very grateful to my students and colleagues for helping me push the boundaries to improve cyber security,” he said in a university press release.

During his tenure, Brumley has been the recipient of numerous awards, including the 2010 United States Presidential Early Career Award for Scientists and Engineers from President Barack Obama. He received his undergraduate degree in math from the University of Northern Colorado and his master’s degree in computer science from Stanford University.

Every year, Intel gives an Early Career Faculty Award to a young faculty member who shows great potential for achieving groundbreaking advancements in his field. The $40,000 award is meant to help the recipient with research and travel costs. The 2012 Intel Early Career Faculty Award was given to Carnegie Mellon’s Onur Mutlu, assistant professor of electrical and computer engineering.

“I am honored and humbled to receive this award as I work with my students and collaborators to develop fundamental breakthroughs to enable future computer systems that are much more efficient, resilient, predictable and economical,” Mutlu said in a university press release. Mutlu’s research focuses on developing microprocessors, computer memories, and platforms that are more efficient and reliable. His research group, known primarily as SAFARI (for safe, fair, robust, and intelligent computer architecutre), is part of the Computer Architecture Lab at Carnegie Mellon (CALCM) and conducts research to improve computer systems.

SAFARI’s major research interests focus on hardware and software interface and improving parallel computing, the process of computation by which multiple calculations are carried out simultaneously. “We have been developing many new ways to solve efficiency, predictability, and robustness problems and combat denial of service attacks so endemic in today’s computer systems. My group aims to rethink the ways in which we design three fundamental functions of all computers: computation, storage, and communication,” Mutlu said in the press release.

An interesting application of SAFARI’s work is in biocomputing: Mutlu’s group is working on designing systems and devices that can improve applications such as DNA sequencing.

“We are very pleased to be able to recognize the tremendous contributions that Professor Mutlu is making to the advancement of the performance of computer systems. His work is widely recognized and impacting this field in numerous ways,” said Ed Schlesinger, head of Carnegie Mellon’s department of electrical and computer engineering, in a university press release.