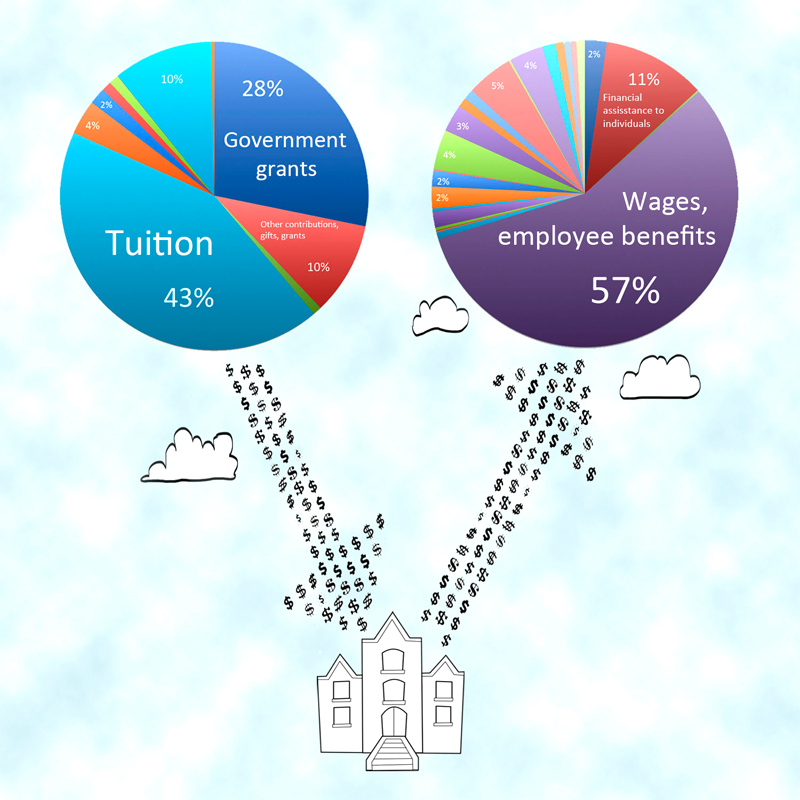 Data according to Carnegie Mellon’s own figures and the Institutional Research and Analysis Factbook. (credit: Annette Ko/Art Editor)

Since last week’s announcement from the university regarding an increase in tuition for the next academic year, questions were prompted by the student body over the university’s current spending and revenues.
The tuition increases were announced last Thursday in an email from Vice President for Campus Affairs Michael Murphy.

Using publicly available 2010 tax data and Carnegie Mellon’s own figures released through the Institutional Research and Analysis Factbook, The Tartan compiled calculations of where the university’s main sources of funding are, and of the most notable sources of spending.

As per the university’s 2010 tax returns of Carnegie Mellon’s revenue, tuition is calculated to account for approximately 43 percent, while government grants and contributions are the second biggest contributor at around 28 percent.

With respect to the university’s expenditures, the largest portion goes towards wages, accounting for approximately 46 percent of spending.

Carnegie Mellon employs 12,539 people, meaning that the average amount spent per year, per employee — on salaries, benefits, taxes, and other items — is calculated to be $45,703.17.

In terms of monetary contributions to its students, Carnegie Mellon recorded giving scholarships to 5,393 recipients at approximately $17,911.20 per person.

As recorded in the university’s 2013 Institutional Research and Analysis Factbook, a total of $79,301,315 was given in donations to the university in 2012 from a combination of alumni, foundations, corporations, and other individuals.

Carnegie Mellon also reported that the majority of its federal research funding is provided by the National Science Foundation at $75,536.

This is closely followed by the funding from the Department of Defense, which totals $71,220.