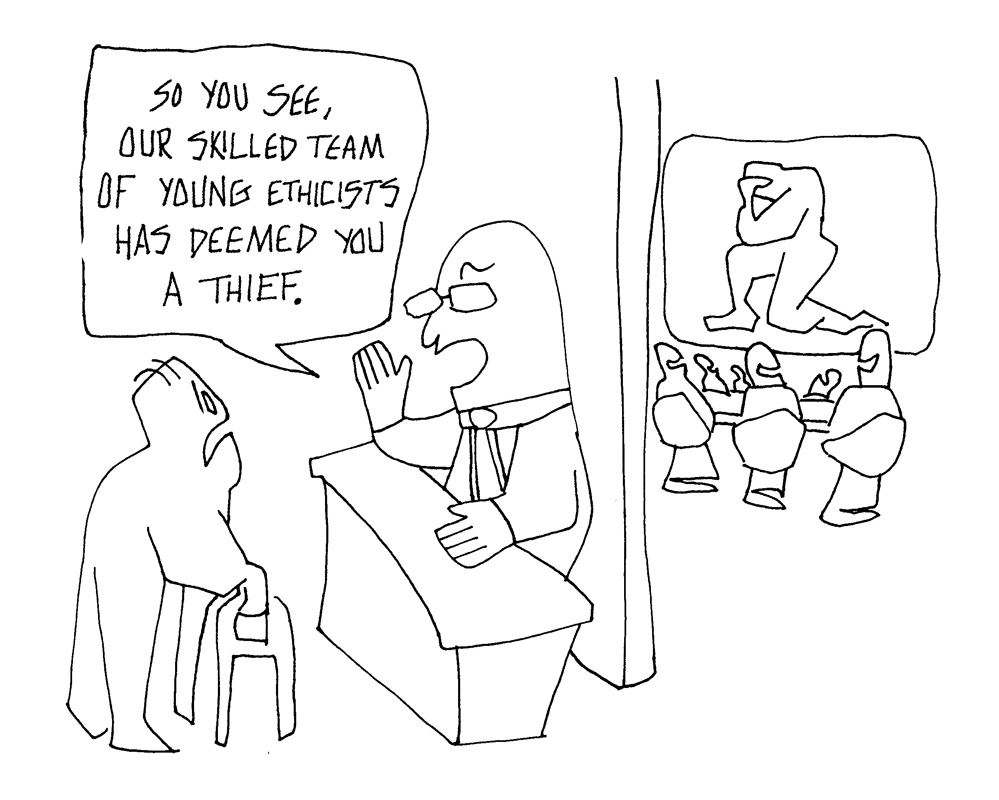 Credit: Juan Fernandez/Staff Artist
Editorials featured in the Forum section are solely the opinions of their individual authors.

It is a dark and stormy night. You and a friend find yourselves walking home through an unfamiliar set of alleys. Twisting and turning in darkness, you trudge through the rain, gradually overtaken by the panic of being lost. A shadow emerges from the dark. You see an elderly man succumbing to arthritis, yet somehow still able to confront you with a .45-caliber pistol. He doesn’t ask you for anything now, but he knows where you live and will kidnap you if you don’t meet his future demands. As an ailing senior, he needs no more than a percentage of every paycheck you earn to pay for his daily expenses and healthcare. In return, he says, when you age, you’ll be able to rob younger and abler people as well.

Many agree that, in the situation above, the geriatric mugger is wrong. He’s using force to rob you. Despite being comically delivered, this is exactly what Social Security and Medicare do. Remembering that government simply serves the people, by eliminating the middleman we see a situation in which elderly people are committing generational theft against younger citizens.

Transfer payments follow this logical thought process. They are robbery from one group of citizens to another group, backed by force and with the guarantee that if you found yourself in the same situation, you’d be able to rob others in a similar manner. Obamacare transfers money from the healthy to the sick; Social Security and Medicare take money from the young and give it to the old; welfare transmits money from the rich to the poor. Yet if any of these programs were to be broken down into the individual transactions they represent, like the elderly man in the alley, we would call these actions immoral.

Charities exist to augment these programs, and people give to them. Most hospitals have charity funds to cover people in need. There are voluntary support programs for the elderly, as well as families who support their parents and grandparents when they become too old to support themselves.

One counterargument to this point is that people won’t be able to keep track of donating to the individual charities that fill the voids that transfer payments currently occupy. Yet, should the government step out of this area, conglomerate charities would emerge that distribute money to all of the areas that government has left behind.
One advantage of having charities fill this void is the efficiency gain that competition would bring to the field. Having the bureaucracy of government replaced with the efficiency of markets and private enterprises would ensure that more of the money put toward these causes would not fuel inefficiency.

The entitlement programs that these transfer payments perpetuate are major drivers of the deficit. Eliminating them would make our government more solvent. This proposed system is functional and workable. A lack of government interference would bring efficiency gains that would help those in need more than transfer payments, which don’t necessarily reflect the will of the people.