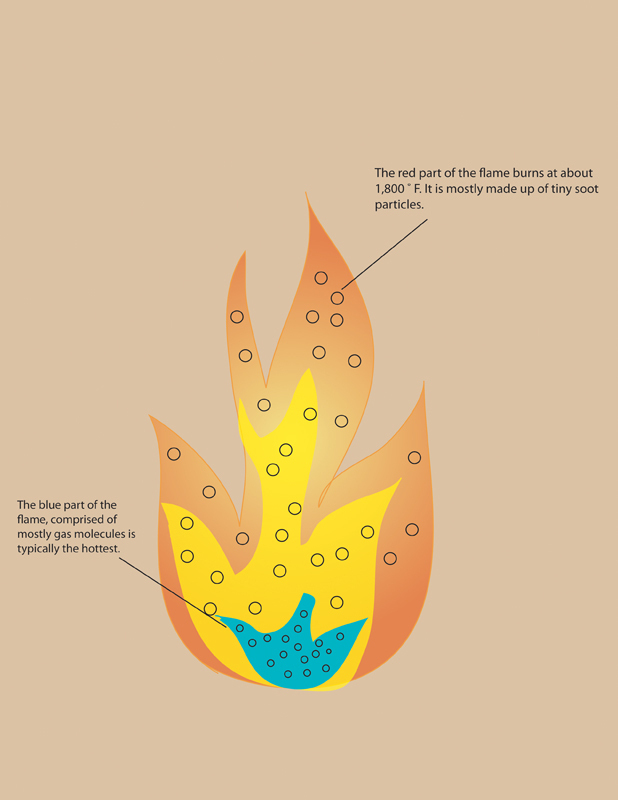 Fire: mankind’s greatest invention, or worst enemy? According to the U.S. Fire Administration, fire kills roughly 3,500 Americans each year and injures over 17,000 more. These numbers are higher than those resulting from any other force of nature. At the same time, it provides heat and is used to cook food needed for human survival, among countless other familiar benefits. Debates aside, one may ponder: How does this seemingly simple yet powerful phenomenon work?

Fire, put simply, is a conversion process. It takes some material (wood, paper, a cigarette) and rapidly converts it to simpler, lighter materials (carbon dioxide, carbon monoxide, smoke). When set on fire, millions of carefully organized molecules that make up a piece of wood are broken down into a mess of smoke.

Three main ingredients go into making a fire: oxygen, heat, and fuel — the absence of just one of these makes fire’s existence impossible. Take, for example, a piece of paper as the fuel. An extremely hot piece of paper will not burn in outer space — there is no oxygen (all of those Star Wars special effects are scientifically inaccurate). The piece of paper won’t just erupt into flames sitting on your desk, either; there is not enough heat.

A seemingly silly but complex question then arises: Why does fire need heat? It turns out that oxygen, one of the three main ingredients in fire, is extremely stable; it will not react with anything unless it has enough energy to do so. Heat, then, is the supplier of energy to oxygen. Once enough energy is available, oxygen can start reacting with the fuel, igniting a flame and starting the fire.

One common way of creating the necessary heat is through friction. Take, for example, the striking of a match — the friction involved in this motion creates enough heat at the interface between the match and the matchbox so that oxygen can now begin reacting with the match head (the fuel), thus creating a flame. The flame from the match can then be used to transfer heat to another fuel to be set on fire.

The flames of a fire confirm that a fuel has been set ablaze. The flames themselves are actually made of vapors and particles that are so hot that they light up — just as a filament inside an incandescent light bulb does. If the flame is colored yellow-orange, it is mostly made up of tiny soot particles and burns at about 1,800˚F. A bluish flame burns even hotter. In this case, the flame is blue because a hotter fire produces less soot (so, less yellow-orange) and more gas molecules, which tend to burn blue. As these particles and molecules get further away from the center of the flame, they cool down and cease to glow, creating an edge to the flame.

An extremely important characteristic of fire is that it is self-perpetuating. That is, fire creates its own heat to sustain itself. There is plenty of fuel around us, and certainly a lot of oxygen, but things aren’t spontaneously erupting into flames. This arguably makes heat the most important of the three ingredients. A strong source of heat is all it takes, so an action as simple as flicking a smoldering cigarette out a car window can easily ignite massive forest fires that destroy millions of acres of land.