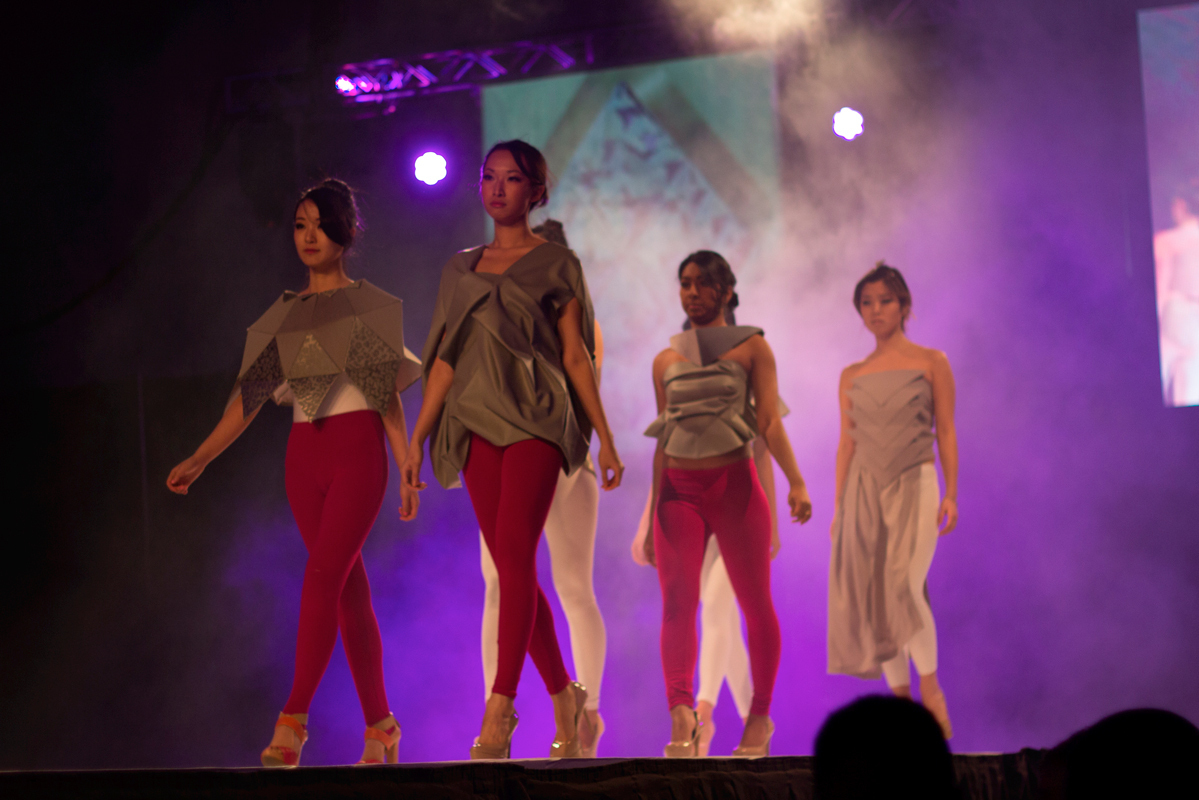 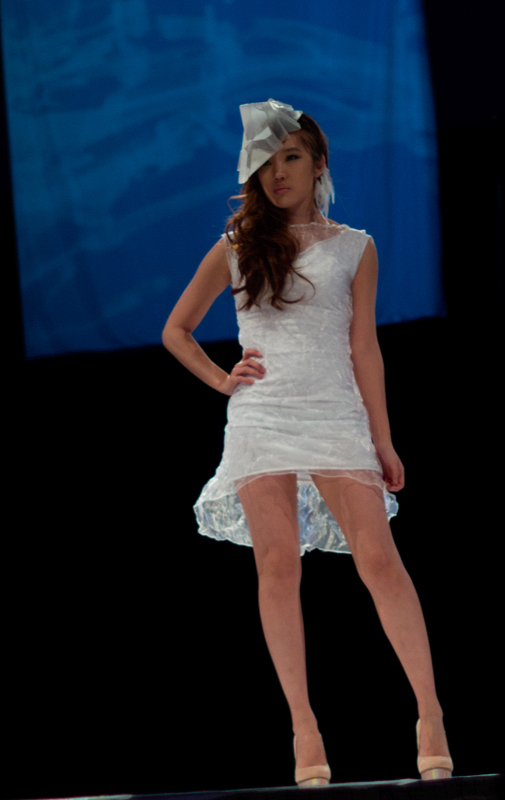 Pulsing music sets the beat for the model strutting down the catwalk. She strikes a pose for the myriad clicking cameras recording her outfit: black leggings, a black long-sleeved shirt, and a high silver collar reminiscent of a visor on a suit of armor. She struts back down the catwalk toward the fog billowing out at one end.

This high fashion event didn’t take place on a runway in New York or Paris. It happened in Wiegand Gym last Saturday, as part of Carnegie Mellon’s annual Lunar Gala.

Although Saturday’s show was under four hours long, the members of Lunar Gala have been working on the fashion show since last April, according to Alexander DeRonde, an executive producer for Lunar Gala and a senior Bachelor of Humanities and Arts student studying communication design and decision science.

This year’s theme of venin — the toxic substances found in the venom of snakes — was inspired by the Chinese New Year, DeRonde said. “The past three years have been pretty vague themes because we don’t like to constrict the fashion designers,” he explained. “But this year, we wanted to do something a little bit different, and we went into this year knowing that we wanted to have a theme with the show.”

The emphasis on theme wasn’t the only change to this year’s show. Lunar Gala’s board decided to add multiple elements to the show, including video art created exclusively for Lunar Gala; 360-degree photographs of every outfit; promotional videos by cmuTV; and a mobile application that Gala attendees could view to learn more about the designs.

By incorporating more technology into the event, “we thought we could really strengthen our image and draw in some people that maybe wouldn’t normally be interested [in the show],” DeRonde said.

The board also decided to turn to an outside public relations firm, Pretty Living PR, for help in promoting the event. “[Lunar Gala is] the largest student-run event on campus, and we sort of realized that we’d reached a wall when it comes to campus publicity, because we really exhausted our resources on campus,” DeRonde said. “We wanted to turn the fashion show into something that’s important in the larger Pittsburgh community.”

Participation in the gala was selective. Designers had to submit their proposed lines in the middle of the fall semester; ultimately, 19 lines were selected for the fashion show. Over 200 students auditioned to be models, but only about 60 were chosen.

Once selected, the participants had to put in hours of work every week. Maureen Griswold, a Lunar Gala designer and senior industrial design major, explained, “You had to go to every rehearsal, and rehearsals were once a week usually in the evening [for about three hours] … and last week before the show there was practice every day.”

For the fashion show, Wiegand Gym was transformed into a dramatic space, with the catwalk striking out into the middle of the gym from a black curtain backdrop with mounted video screens. The seating area was packed, so for those who were sitting farther from the runway, there were multiple video cameras recording the models as they strutted down the catwalk, and the footage was broadcasted on several of the screens.

The show kicked off with “Expression in White,” a collection of wedding dresses by senior design major Laura West, set to a peppy remix of a song by French pop group Yelle. The dresses featured plenty of ruffles and were all made of the same unusual material: paper. As Lunar Gala’s website explains, “Her collection aims to redefine what a wedding dress can be. By constructing the wedding dress out of a more sustainable material, paper, she aim[s] to put more importance on the memories of the day rather than the artifacts that are left over.” Since the dresses were all made of the same material, the designs for all eight dresses were very similar.

“Quartz,” by sophomore design major Antonio Ono and sophomore Bachelor of Humanities and Arts student Samantha Chiu, featured a collection of eight all-white outfits with geometric details that, according to Lunar Gala’s website, “focuses on the tensions between structure and gravity, light and form, and the manufactured world versus the natural world.”

Although Kate Spade was originally listed as a boutique whose clothes would be modeled in the show, clothing line Younique showed instead.

The rest of the designers in the first act fit the theme of a lighter spectrum, with several of the lines featuring pastel colors, lace and chiffon fabrics, and interesting geometric shapes. “Sense & Sensibility,” a line by first-year biology major Angela Thomas, stayed true to her muse of Jane Austen with dreamy, pastel dresses and dapper bow ties and pastel pants for men.

Another highlight was “Mobier,” a shoe collection by fourth-year architecture majors Morgan Stampf and Scott Harrison. The shoes were structurally impressive: They were all highly geometric tan shoes with black ribbon details that were probably impossible to walk in, but looked like works of art.

The second act also included the most raucous moment of the evening, when men and women modeled for Pussycat, a lingerie boutique. Audience members cheered wildly for their friends, and when all the models for the boutique came out together at the end, they broke their serious poses for the first time in the evening to dance along to the music.

Suddenly, a dancer for hip-hop dance team Soulstylz came out on stage and began dancing between the lines of models. The rest of the dancers in the troupe soon joined him, and they kept the audience cheering with their impressive, high-energy dancing.

The final line of the evening — “Proxy,” by sophomore design major Rachel Ciavarella — was by far the most experimental line of the evening. Models wore simple, all-black outfits with wild appendages; one model was encased in what looked like a white plastic ribcage, while another wore a high silver collar reminiscent of a visor on a suit of armor. Dark and experimental, it was a far cry from the white paper dresses that began the show, and exemplified the wide range of designs featured in the show.

At the close of the show, the executive producers thanked a long list of people and raffled off a Kate Spade handbag before closing the evening, encouraging everyone to attend the official after-party at Club Whim in the South Side. As the audience members poured out of the gym, dancing to Macklemore’s “Thrift Shop” as it blared over the speakers, they chattered excitedly about all the fashion talent they had just witnessed. Carnegie Mellon may not have a fashion design program, but Lunar Gala proved yet again that there is still plenty of fashion talent on campus.