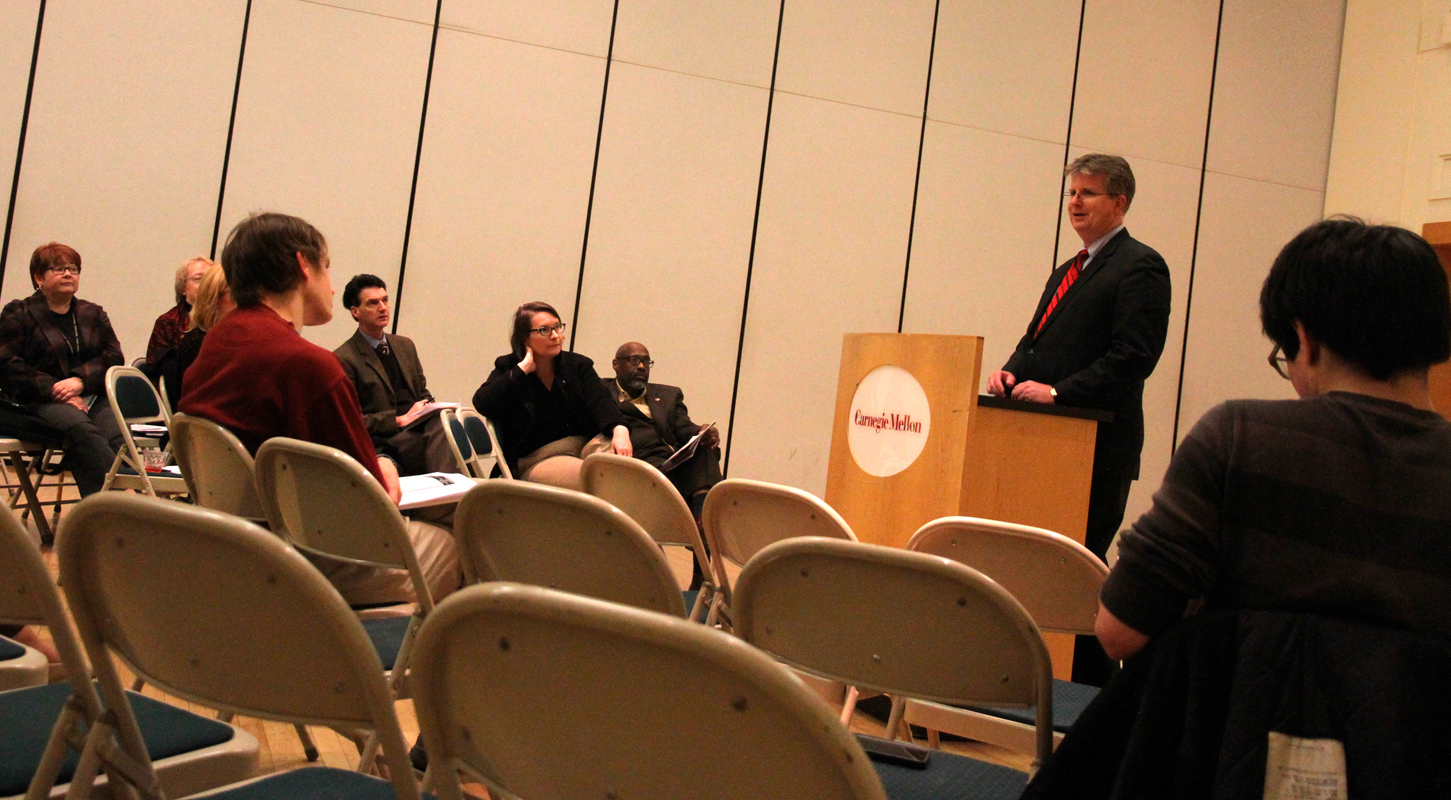 Murphy currently chairs the committee and also serves as interim VP/CFO until a successor is named.

Commenting on Storbeck/Pimentel’s role in the search, Murphy noted, “Often people don’t want to be identified as candidates, particularly if they’re currently in high profile positions.”

As the VP/CFO search committee now begins to consider applications received in response to these public job postings and from Storbeck/Pimentel, Murphy emphasized that the purpose of the town hall was to “hear your thoughts about the position and to make sure that as we move forward, we have your input.”

With that, Murphy posed three discussion questions for the audience before opening up the floor to questions: “What are the great reasons to come to Carnegie Mellon? What are the challenges of the VP/CFO position? And what are some of the core qualities that committee should be looking for in candidates?”

Attendance at the open town hall consisted primarily of other members on the search committee, who both asked questions as audience members and joined Murphy in answering questions posed by the attendees.

The town hall sparked a great deal of discussion in particular about how the committee should weigh entrepreneurship and business skills against previous experience in higher education.

According to Murphy, the university has generally only recruited executives from higher education backgrounds, such as retiring president Jared Cohon, who worked at Yale University and Johns Hopkins University.

“We tend to presume that the ideal candidate will come in with an understanding and enthusiasm [for] … the structure of a large private institution like Carnegie Mellon,” said Murphy.

However, as audience member and Vice Provost for Education Amy Burkert, pointed out, “[Carnegie Mellon’s] aspirations and the league in which we want to play is much higher than what the university actually has these resources to do, and it won’t be a walk in park for CFO to navigate this reality constantly.”

Carnegie Mellon’s endowment of $1 billion is a fraction of the endowments of the other private institutions in its peer group.

“We’re always looking at our peers and seeing how with the endowment draw and gifts that they get, they can pay for things that we can’t afford,” observed Barbara Morycz, committee member and Assistant Vice President of Budget and Financial Planning.

“But we’ve been fortunate enough to be able to find creative sources of funding for things that don’t just naturally fall into our laps out of the budget.”

Given how the 2008 economic crisis and the possibilities of federal spending sequestration have exacerbated this discrepancy between Carnegie Mellon’s ambitions and its available resources, committee member and professor of philosophy Joel Smith posed the question of whether a particular candidate’s entrepreneurship skills merited additional consideration in this process.

“If candidates present themselves as coming from a very entrepreneurial background and can think creatively about financial situations…. Can that experience make up for a lack of experience in higher ed?” Smith asked.

Murphy announced that the committee will be reviewing applications starting in March.

They expect to narrow down candidates to a list of three finalists by the first week of May.

The start date for the new vice president and chief financial officer selection is slated for July 1, the same day that Suresh is set to take office as Carnegie Mellon’s ninth president.