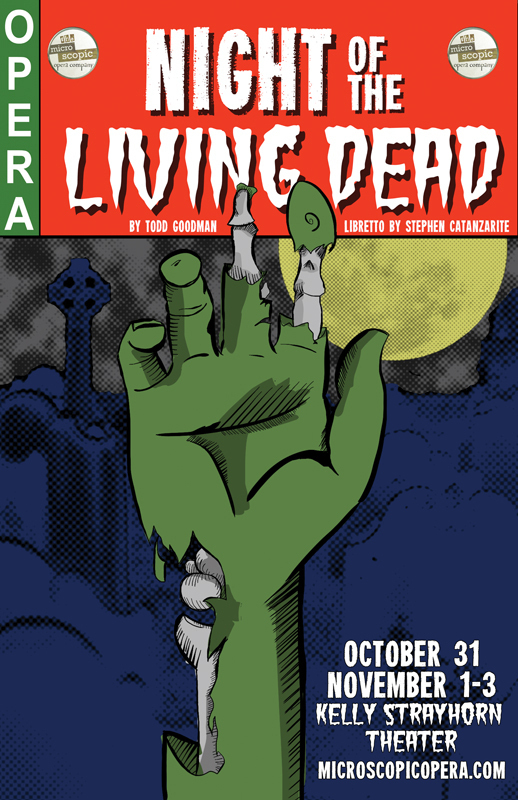 Numerous Carnegie Mellon alumni worked to produce _The Night of the Living: The Opera_, which premiered last weekend at Pittsburgh’s Kelly Strayhorn Theater. (credit: Courtesy of the Microscopic Opera Company)

Few things are as dear to Western Pennsylvanians as the 1968 horror film, Night of the Living Dead, filmed in Evans City, Pa., by horror movie pioneer and Carnegie Institute of Technology alumnus George A. Romero. Stephen Catanzarite (DC ’90) combined his love for the film with his creative writing background to create Night of the Living Dead: The Opera.

On Tuesday evening, students and faculty members gathered in the Gladys Schmidt Creative Writing Center in Baker Hall for an intimate conversation with Catanzarite about writing and working as a Carnegie Mellon graduate. Sigma Tau Delta, the international English honor society, organized the talk.

“I didn’t know what I was going to do,” Catanzarite said of his career path after graduation. He first began writing for industrial videos, but eventually became the founder of two charter schools that emphasize the arts in education.

It was a combination of chance meetings and Hollywood connections that led to Catanzarite penning the libretto for an opera. It was originally proposed to him as a Broadway musical, but Catanzarite thought the inherently campy nature of musicals would ruin the story. He took his job very seriously, wanting to pay homage to the genius of the film, rather than entertaining for entertaining’s sake. The opera stays true to its source material, following seven people trapped in a farmhouse during a zombie attack.

So yes, the zombies sing — but the catch is that they can only communicate as a group, representing what Catanzarite describes as a “voice or consciousness in numbers.” The team behind the production also kept it rooted in Western Pennsylvania, throwing in small references to places or people familiar to the area and even some Pittsburghese.

Catanzarite wasn’t the only member of the Carnegie Mellon community involved in the production. Andres Cladera (CFA ’03) and Erica Olden (CFA ’97, ’01) are the co-founders of The Microscopic Opera Company, which is putting on the show. Gregory Lehane, a Carnegie Mellon professor of drama, directed the production, and Britton Mauk (CFA ’13) is the scenic designer.

Catanzarite’s passion for the project was obvious just by how much he had to say. Although the subject of his talk was writing in general, the conversation kept coming back to the production. He also talked at length about his time at Carnegie Mellon and how much it prepared him for writing the opera. Catanzarite showed Dietrich students that their training in the humanities can be expanded in strange but productive ways.

The gathering of people was small, but that atmosphere lent itself to the conversational nature of Catanzarite’s talk, as students and faculty interrupted to clarify or ask questions, or even to crack a joke.

After talking about his accomplishments for an hour, Catanzarite jokingly asked, “Am I a distinguished alumni yet?”

The world premiere of Night of the Living Dead: The Opera ran from Oct. 31 through Nov. 3 at the Kelly Strayhorn Theater in the Penn Avenue Arts District.