NASA closer to Mars with MAVEN 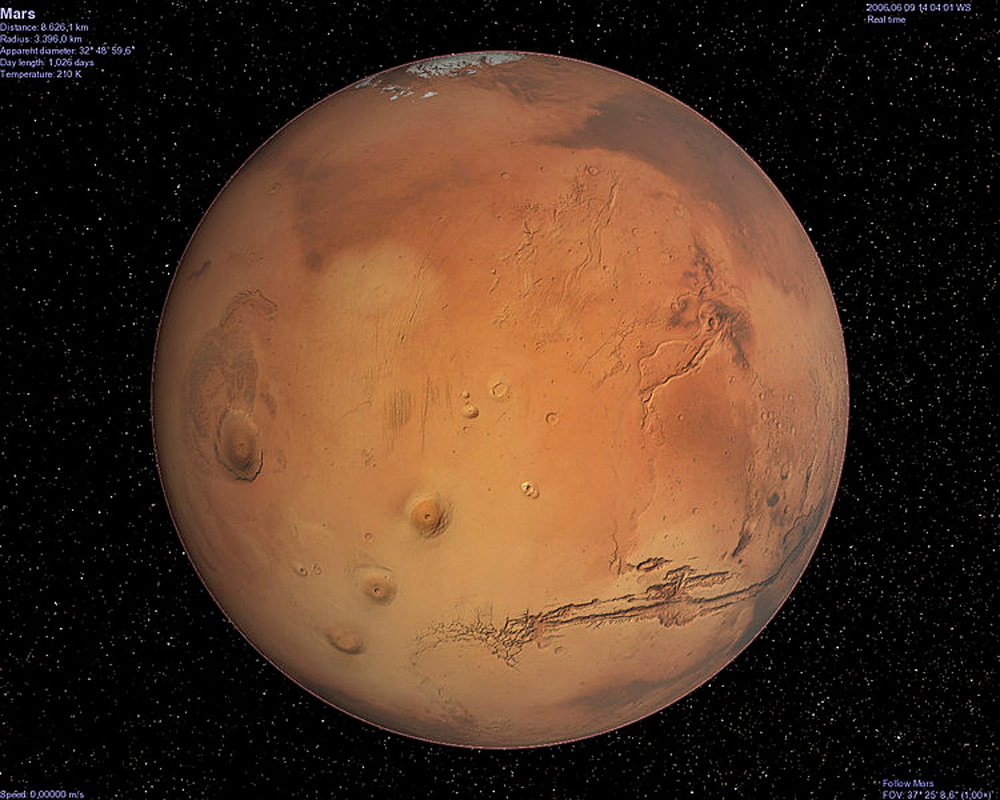 The planet Mars, as seen from Celestia, a 3-D astronomy program. (credit: Courtesy of Wikimedia Commons)

Mars, named after the Roman god of war for its distinct red color, resides in an orbit approximately one and a half astronomical units from the sun. Home of Olympus Mons, the largest known volcano in the solar system, as well as the famous Valles Marineris canyons, Mars has long been a favorite among astronomers, as well as the planet on which the possibility of human habitation seems most probable.

Unfortunately, most studies of the intriguing planet have been done from observatories on Earth, which, at its closest approach to Mars, is still millions of miles away. According to nineplanets.org, the first spacecraft to visit Mars was Mariner 4 in 1965. Since then, several other missions to the elusive planet have been made. However, NASA’s website states that the MAVEN spacecraft will surpass previous explorations to Mars: “[It] will provide information about the Red Planet’s atmosphere, climate history and potential habitability in greater detail than ever before.”

According to a NASA press release from the day of the launch, the MAVEN spacecraft separated from an Atlas V Centaur rocket’s second stage 53 minutes after the launch. Approximately seven minutes later, solar arrays powering the spacecraft were deployed, and the MAVEN was off on its 10-month journey to Mars. It should arrive at Mars next September.

The main goal of the MAVEN mission is to understand the upper atmosphere of Mars — in particular, how the loss of atmospheric gas to space changed and affected the climate of the planet. To calculate how much of the Martian atmosphere has escaped into space, MAVEN will measure the current rate of escape and gather information to learn about the process so that a backwards extrapolation can be done.

The mission team is comprised of a diverse group of scientists. MAVEN Project Manager David Mitchell is from NASA’s Goddard Space Flight Center in Greenbelt, Md., which manages the project and provided two science instruments for the mission. MAVEN Principal Investigator Bruce Jakosky works from the Laboratory for Atmospheric and Space Physics at the University of Colorado Boulder. The Space Sciences Laboratory at the University of California, Berkeley also provided science instruments for the mission. NASA’s Jet Propulsion Laboratory in Pasadena, Calif. is instrumental in navigation support. Lockheed Martin built the spacecraft and is in charge of mission operations.

“After 10 years of developing the mission concept and then the hardware, it’s incredibly exciting to see MAVEN on its way,” Jakosky said in a NASA press release. “But the real excitement will come in 10 months, when we go into orbit around Mars and can start getting the science results we planned.”