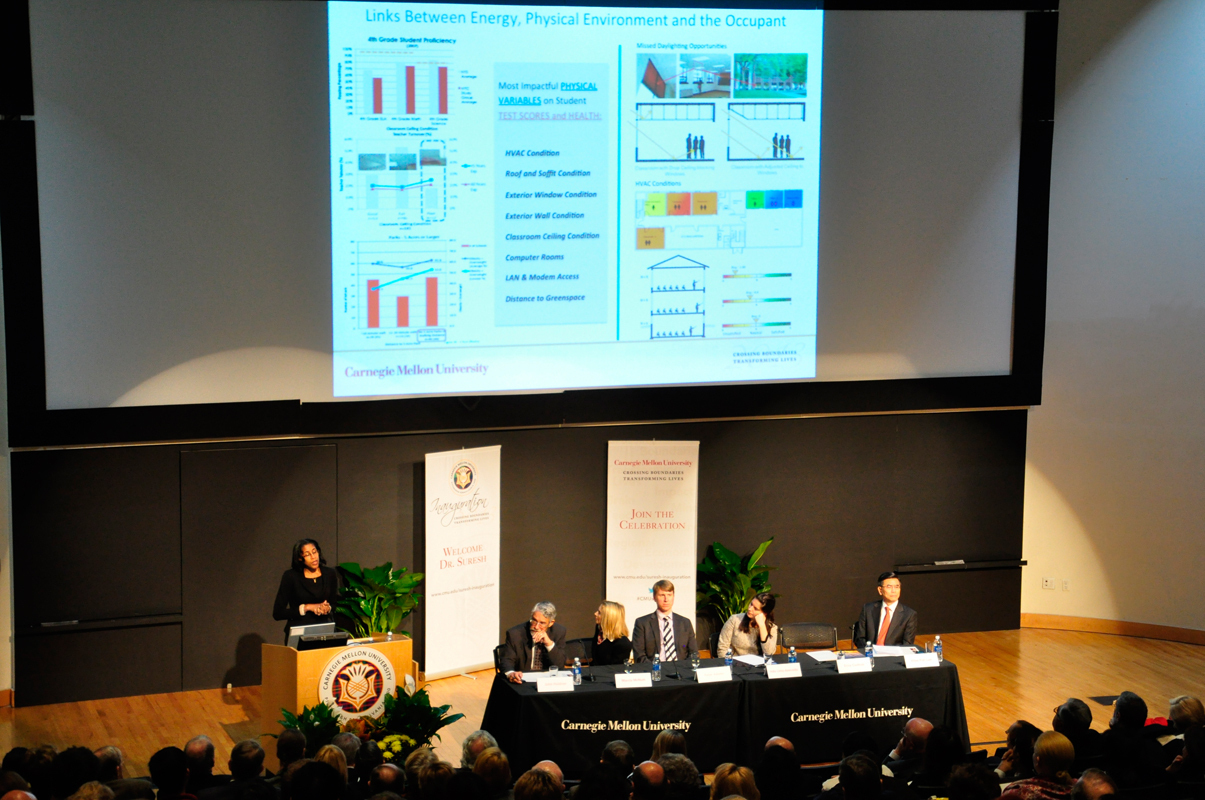 Erica Cochran, an assistant professor in the school of architecture, talks about the role of buildings in climate change and energy consumption. (credit: Peter Lee/Staff Photographer)

Climate and energy experts from across the country gathered to participate in a symposium last Friday in McConomy Auditorium. The panel discussed “Opportunities and Challenges in Energy and Climate” as part of the week-long celebration for the inauguration of President Subra Suresh.

The conversation included thoughts from John Holdren from the White House Office of Science and Technology Policy and Science magazine editor-in-chief Marcia McNutt. Representing Carnegie Mellon research and perspective was Peter Adams, a civil engineering and engineering and public policy professor; Inês Lima Azevedo, an engineering and public policy assistant professor and co-principal investigator and co-director of the Climate and Energy Decision Making Center; Erica Cochran, assistant professor in the school of architecture and UDream program coordinator and Carnegie Mellon Ph.D. candidate; and Khee Poh Lam, a professor in the school of architecture. The discussion began after opening remarks by President Suresh and was moderated by Raymond J. Lane, a life trustee and chairman of Carnegie Mellon’s Board of Trustees.

Topics included President Obama’s Climate Action Plan and the need for national policy to consider both mitigation and adaptation in its strategy, as well as the use of adopting renewable energies to satisfy the global energy demand. The panelists from Carnegie Mellon presented research on many areas of climate and energy problems: the effects of different types of air pollution on atmospheric cooling and heating; decision making and the implications of policy goals in determining the best location for renewable energy installations; an investigation of energy use in urban schools and its impact on education; and new efforts in Chinese urban planning to create greener cities.

Each topic demonstrated an aspect of the Inauguration’s theme “Crossing Boundaries, Transforming Lives,” which aims to make people consider “how crossing geographic, disciplinary and technological boundaries will accelerate innovation in education and research to help address the world’s most pressing challenges,” according to the inauguration website. This symposium addressed one of these challenges — climate change and the need for clean energy solutions — and emphasized the role that universities can play.

President Suresh expressed in his opening remarks that Carnegie Mellon’s ability to coordinate policy, technology, and education and its location in Pittsburgh — one of the United States’ clean energy leaders — provides valuable advantages to produce answers to climate change and energy. Cochran also mentioned during her presentation that, “At Carnegie Mellon, not only do we like to come up with solutions — we like to share them.”

The symposium addressed that the major problems about sharing solutions is not the lack of technological innovation, but also the ability to bring the solutions to the people.
“The technology is there, but the hard part is the people and the policy,” McNutt said. “That’s why I think the program at Carnegie Mellon is so valuable because it addresses issues like that. Not only do they pursue technology solutions, but the Scott Institute for Energy Innovation and Steinbrenner Institute for Environmental Education and Research here at CMU also strives to provide resolutions for technology policy.”

Tackling the climate change and renewable energy challenge is not just an administrative goal — students are interested as well. A graduate student poster session outside the symposium demonstrated an array of research on the topic.

Michael Oden, a sophomore in civil and environmental engineering who attended the symposium, said he was attracted to the talks because of his passion for the topic and his interest in the university’s future plans.

“I don’t think that they’re doing too much right now, but they’re trying to. Like they are building the new Scott Hall,” he said. "I think we have the deparments to do it."
Scott Hall, cited by President Suresh in his opening remarks as another key advantage in Carnegie Mellon’s energy strategy, will be the newest academic building on campus and will house the Scott Institute for Energy Innovation. According to its website, the Scott Institute aims to establish an interdisciplinary center for “creating innovations in energy technologies, regulations, and policies.” More importantly, the new building may also give university energy efforts a much-needed visible presence on campus.