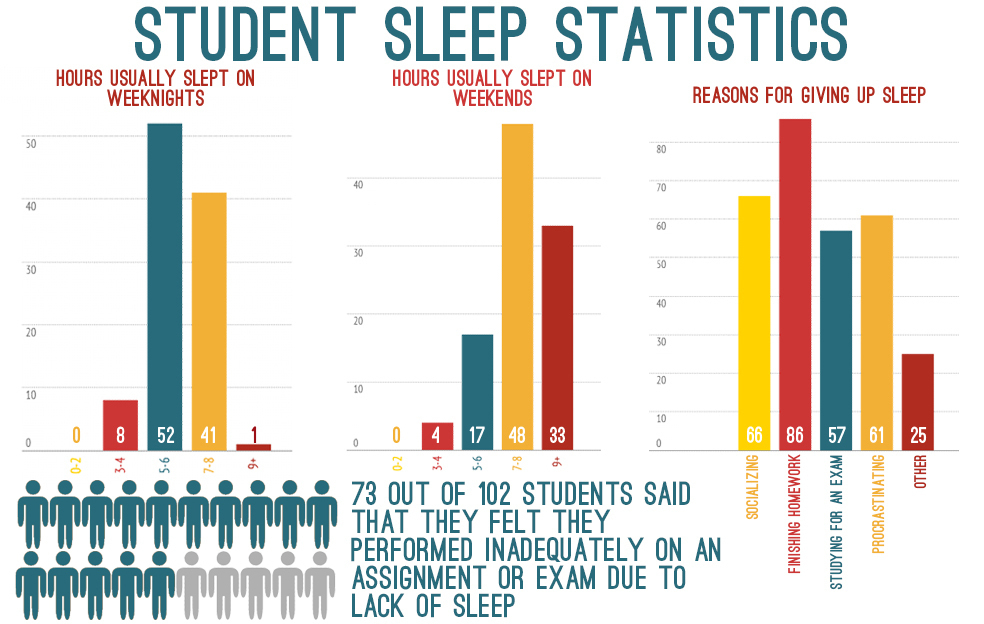 However, in general, most university students have a reputation of being particularly sleep deprived, often complaining about their relative tiredness and comparing all-nighters. A 2009 study published in the Journal of Adolescent Health found that more than 60 percent of college students demonstrate disturbed sleep-wake patterns and 20 percent reported pulling an all-nighter at least once per month. The Tartan conducted a survey to determine the true amount of sleep that students were receiving, and their perceptions of the effects sleep has on their academic performance, as well as physical and mental well-being.

In order to get a sense of college students’ sleep habits, as well as its perceived and actual effects, The Tartan created and distributed an online survey. There were 102 respondents, all of whom had registered college email addresses, and 54 of whom attended Carnegie Mellon.

On weekends, students appear to be catching up on their sleep, with 47 percent of responses reporting seven to eight hours of sleep, and 32 percent getting over nine hours of rest.

In terms of academic effects, 72 percent of students responded that they felt they had performed poorly on an exam or assignment because of inadequate sleep.

The health effects tied to poor and disrupted sleep habits can be quite striking.

As documented by WebMD, chronic sleep loss and sleep disorders increase the risk of serious health ailments such as heart disease, high blood pressure, stroke, and diabetes, among other issues. Additionally, sleep plays an important part in cognitive functions.

Lack of sleep can upset one’s alertness, concentration, reasoning, and problem-solving abilities. Sleep also plays a key role in consolidating memories. For a student, these effects from sleep deprivation can prove quite challenging.

“We’ve always had this notion that sleep is a biological process of restoration … but we also know sleep is pretty complicated, consolidating memories and aiding certain types of problem solving,” he said.

Kumler added that while it has not been fully established in medical research, “during certain stages of sleep, our brains are purging certain byproducts of the brain using energy during the day, like cleaning out the clogged pipes.”

Kumler added that a lack of sleep gives students “a harder time remembering things we learned the day before, leaving us not as well equipped to solve complicated problems.”

Their past projects include sending dinosaur-shaped chocolates with messages on behalf of students at no cost.

Ng said that the goal of Project Smile “is to make people understand how to relax. I think the stress culture gets to people,” she said. “We want to show that they don’t have to have bad weeks every week.”
Gitterman said that she joined Project Smile because she “liked the idea of making people happy. You can do something nice for someone else without it costing anything.”

Outside of Project Smile, Ng is using a student grant awarded by Student Affairs for enhancing campus culture to build a “Happiness Room” in the West Wing dormitory.

Ng described the Happiness Room as “a place with no technology, no homework, and a lot of comfy chairs.” She added that the room will have whiteboard walls and a lending library where people will be encouraged to donate books and write messages in them.

With respect to student well-being, Kumler said, “Yes, there are a lot of students at CAPS who are struggling with sleep,” adding that “stress, mental health, and sleep are all intertwined.”

When asked what advice he’d provide to students wishing to balance multiple tasks at Carnegie Mellon, Kumler responded, “You can’t do everything. The best we can do is be informed about everything,” adding that everyone has a limited amount of time.

Sleep poses a national issue for most college students. Roxanne Prichard, a co-author of the Journal of Adolescent Health study, told Medical News Today, “Students underestimate the importance of sleep in their daily lives. They forgo sleep during periods of stress, not realizing that they are sabotaging their physical and mental health.”

An article published by Harvard Medical School discusses the role of sleep in determining mental health outcomes, writing that those with chronic insomnia have an increased risk of developing mood disorders such as depression or anxiety.

It went on to cite a University of Pennsylvania study that limited its participants to only 4.5 hours of sleep each night for a week, in which subjects reported “feeling more stressed, angry, sad, and mentally exhausted.”