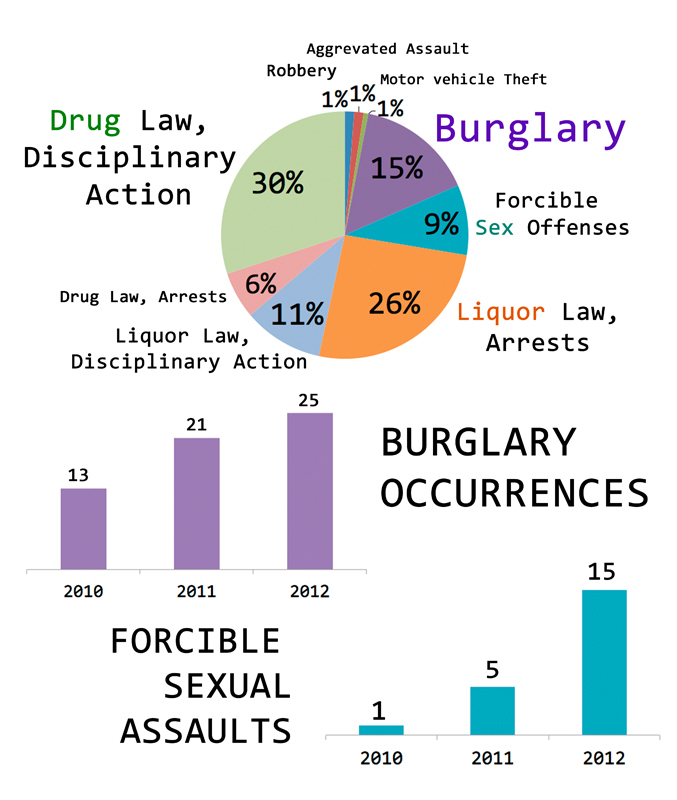 The release of this report complies with the Jeanne Clery Disclosure of Campus Security Policy and Crimes Statistics Act. The Clery Act requires the university to publish crime and fire statistics from the past three years by Oct. 1 of each year.

The report provides details on how members of the Carnegie Mellon community can contact police and emergency services, the location of police crime logs, the location of emergency phones on campus, as well as many other resources regarding crime and fire safety.

Regarding crime statistics, the report mentions that “Under the Clery Act, ‘Professional Counselors,’ such as the counselors in CAPS, are not considered to be campus security authorities when acting in their professional capacity and are not required to report crimes for inclusion into the annual disclosure of crime statistics.”

“The department’s crime prevention strategy… relies on the dual concepts of eliminating or minimizing criminal opportunities, whenever possible, and encouraging community members to take responsibility for their own and others’ safety,” the report continues.

“Thefts have historically been part of life in an open environment,” Ogden said about the high number of burglaries. Ogden attributes the higher number to increased reporting of crime. “We’re seeing a lot more people who normally wouldn’t report thefts reporting,” he said.

Ogden went on to describe that the university has partnered with the University of Pittsburgh to track down thieves, and is using plainclothes officers and cameras to catch perpetrators. He described one incident where Pitt sent pictures of two people who had been stealing from their locker rooms; the two were located and apprehended on Carnegie Mellon’s campus that afternoon stealing from the locker rooms in the University Center.

“We’re making good progress on the recent laptop thefts, and have made three arrests,” Ogden added.

The most striking increase was in the number of “forcible” sex offenses, which spiked to 15 last year, compared with five in 2011 and one in 2010.

Ogden remarked that “we’re seeing a steady increase in reporting [of forcible sexual offenses] nationwide. Sex assault is one of the most underreported crimes.”

He described that the victim works closely with counseling, student activities, and the police to decide the course of action to take. “The victim, with a lot of support, makes the decision,” he said.

In response to concerns about sexual assault, the annual report provides contact information for programs such as Rape Aggression Defense (RAD) and Self-Defense Awareness & Familiarization Exchange (SAFE). RAD is “designed specifically for women” and is described in the report as “a nationally recognized twelve-hour course that teaches women the skills that can help prevent or survive a violent attack.” The report also notes that “in partnership with the Athletic Department, the University Police Department also offers RAD as a 3-unit course to all registered students.”

SAFE is a “nationally recognized educational awareness program that provides teenage and adult women with information that may reduce their risk of exposure to violence and introduces them to the physical aspects of self-defense,” the report says.

SAFE is offered as a two -hour course on a by-request basis to small groups on campus.

The report also notes that last year there were 42 liquor law arrests, 17 disciplinary actions with respect to liquor laws, 10 drug law arrests, 73 disorderly conduct charges, and 17 cases of vandalism.
Ogden spoke of the $30,000 grant the university received from the Liquor Control Board to educate and curb liquor law violations. The grant — which was awarded to Jason Hendershot, a sergeant in the Carnegie Mellon University Police — will be used to begin a two-year alcohol education and enforcement program called Realize Alcohol Influences Decision making, or RAID.

There were four fires recorded on campus in 2012, three of which were unintentional and attributed to cooking, and one which occurred in a trash can in Morewood E-Tower.

Rick Caruso, fire safety manager for Carnegie Mellon’s environmental health and safety department, confirmed by email that “there have been no major changes to the university’s fire policy since the last Security and Fire Report was issued.”

Alex Frantz, a sophomore drama major and resident assistant in Morewood Gardens, said, “As an RA, I am familiar with the Annual Security and Fire report. It is a resource that we were familiarized with during training.”

Frantz added that “the contact list provided at the bottom of the sheet is a really good snapshot of just some of the resources available. I would say that all students should have these numbers programmed into their phones, just because you never know what you will need when. Probably the most important of these [numbers] is the campus police.”

“I’m only concerned because everybody here is so busy,” Ogden said with respect to nonemergency reporting.

Ogden is worried that students put off bringing up issues, rather than informing the police as soon as they occur. In the case of an emergency, Ogden urged students not to hesitate to call University Police. “Just call. You’re not bothering us.”

The 2013 Annual Security and Fire Safety Report can be viewed and downloaded from http://www.cmu.edu/police/images/2013asr.pdf.