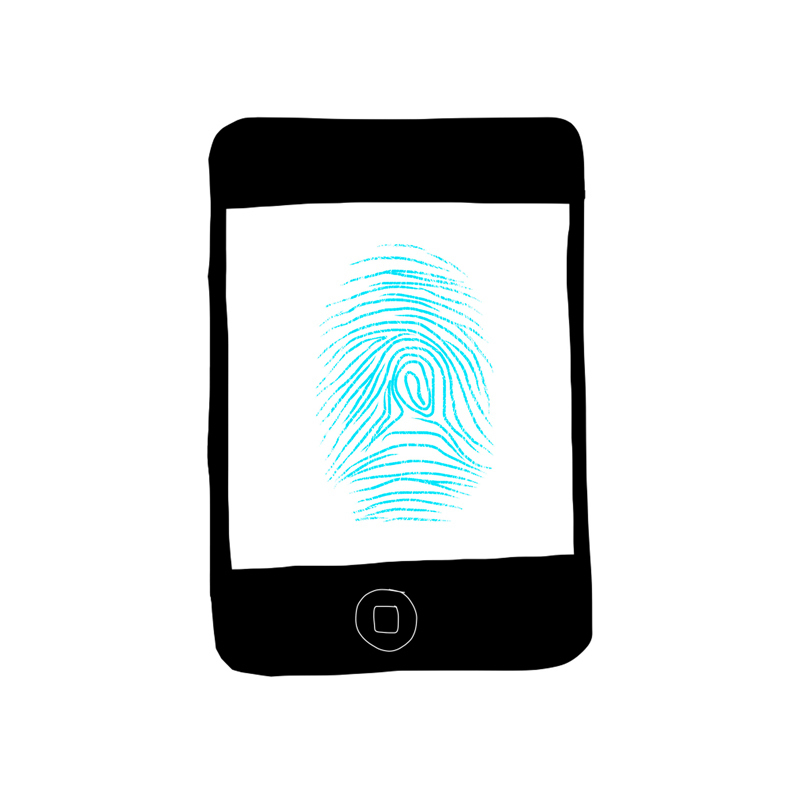 Credit: Annette Ko/Staff Artist
Editorials featured in the Forum section are solely the opinions of their individual authors.

Since its debut, news companies have praised the iPhone 5s and one of its newest features: the Touch ID fingerprint scanner. In its review of the device, tech blog SlashGear describes the scanner as “the first biometrics system that actually stands a chance of succeeding in the mass market.”

Apple is not the first to pioneer biometric security, but because of the company’s widespread success, other companies tend to follow in its footsteps. Because of this trend, more devices with fingerprint scanners will soon be on the market.

Apple’s Touch ID system offers great convenience to the user. Strenuous password typing has been replaced with a simple touch of the finger. However, with great convenience also comes great risk: The fingerprint is perhaps the most sensitive information that we have ever placed into our mobile devices. Imagine the power that an individual, corporation, or government body could gain if it had the potential to access a larger number of Americans’ fingerprints than it currently has.

In a press release dated Sept. 10, Apple promises that Touch ID will provide an extremely secure experience. It states, “All fingerprint information is encrypted and stored securely in the Secure Enclave inside the A7 chip,” and “it’s never stored on Apple servers or backed up to iCloud.” These statements sound promising, but after the recent leaks released by National Security Agency (NSA) contractor Edward Snowden surrounding its surveillance measures, can we truly believe every word Apple — or any technology corporation for that matter — tells its customers?

I hope to think that the answer is still yes; however, many people remain skeptical, including hacktivist group Anonymous. According to a video recently released by Anonymous, the deal between AuthenTec — the biometric scanner company that creates the Touch ID sensors — and Apple is questionable, due to AuthenTec’s past connections to the government and a recent FBI biometrics project.

Anonymous points out in the video that AuthenTec entered the market as a spin-off company of Harris Corporation, which receives an annual $6 billion from the government. In addition, the current chairman of AuthenTec, Robert E. Grady, served as deputy assistant to George H.W. Bush. Grady also did work at the Carlyle Group, a Washington D.C. management firm that invested $910 million in Booz Allen Hamilton — the intelligence firm that employed Snowden. Because of this, it is undeniable that the manufacturer of these biometric scanners has connections with the U.S. government and military.

Anonymous also leaked documents that revealed the FBI’s alleged “Next Generation Identification” plan, which would create a fingerprint database of citizens “for use both domestically and on the battlefield.”

What better way is there to gain access to the fingerprints of all Americans than to place biometric scanners on the personal devices they love most?

I would like to believe that we live in a country where the government and corporations are ethical enough to not collect and store the fingerprint data of everyday citizens.

However, after The New York Times revealed last week that the National Security Agency had conducted a project in 2010 and 2011 that tested collecting the location data of everyday citizens from their cellular devices, it is clear that this organization lacks any sense of respect for personal privacy, and if there is a way to gain access to this trove of fingerprint data, it will find it.