Students share tales of science and life at Story Collider 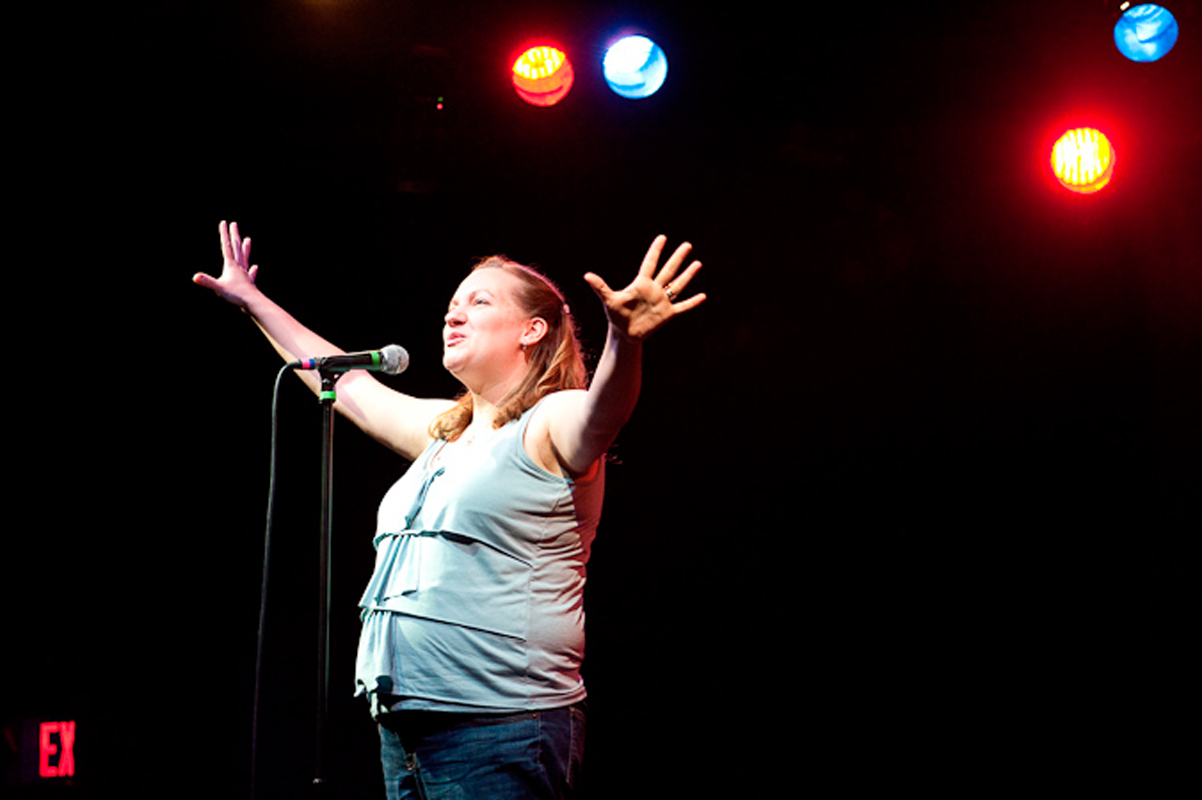 Michelle Ntampaka shared her story finding her love of stars — and the love of her life — in Africa. (credit: Courtesy of Carmon Rinehart) 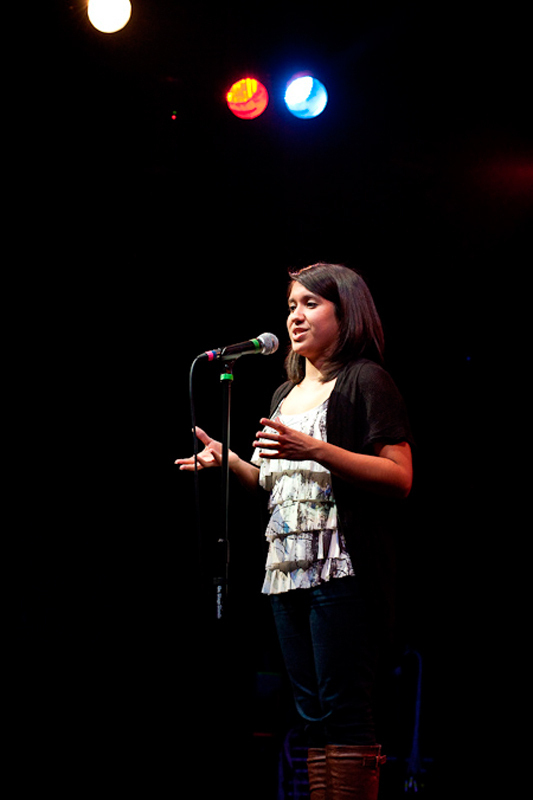 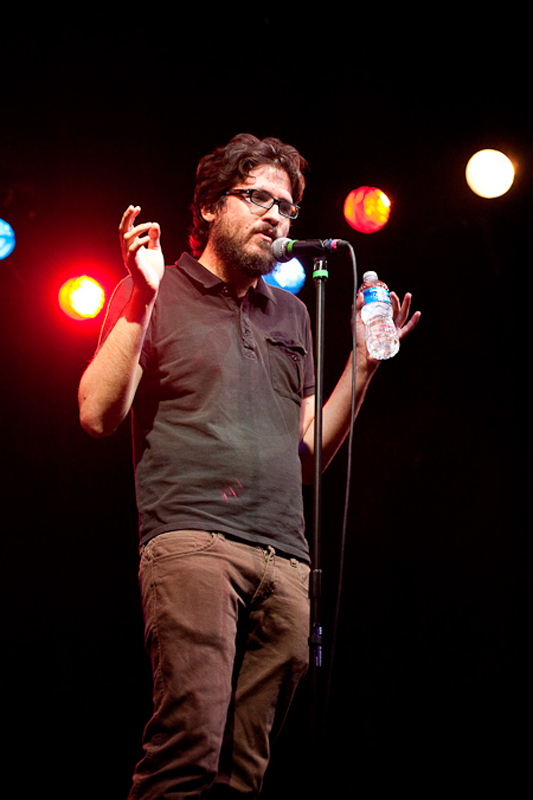 Avner Maiberg shared his revelation that there are no shortcuts in life. (credit: Courtesy of Carmon Rinehart)

On a chilly evening last Monday, Carnegie Mellon students, faculty, and staff and members of the Pittsburgh community huddled in the Rex Theatre in Pittsburgh’s South Side to listen to five individuals share personal stories about science. The event was co-hosted by Story Collider, a traveling podcast that records people’s stories about science, and Public Communication for Researchers (PCR), a group of graduate students at Carnegie Mellon that focuses on communicating science to the public.

The stories themselves came from five Carnegie Mellon students — four graduate students and one undergraduate — covering a range of emotions and describing trips to rural Pennsylvania, Rwanda, Italy, Massachusetts, and Pittsburgh.

Story Collider producer Erin Barker and co-founder/director Ben Lillie, who hosted the event, squelched any fears of a humdrum lecture. “There will be no learning tonight,” Barker exclaimed. “That is the Story Collider promise.”

Victor Hwang, a graduate student at Carnegie Mellon’s Robotics Institute, was a college senior when he began preparing for a job at the Jet Propulsion Laboratory in Pasadena, Calif., where had interned the previous summer.
According to Hwang, working at the JPL was an intense change from college life: “I went from playing video games for five hours a day in my underwear to working on a $330 million spacecraft for my first job as a 22-year-old,” he said.

One of his assignments involved working on an extremely complex sequence of code for a spacecraft 20 million miles away. When it was finally time to implement the code, he went to the command room to “beam it up.” But after a countdown, the spacecraft failed to appear on his screen. After failing to initially determine the issue, Hwang began to panic. “I imagined a newspaper headline, ‘22-year-old blows up spacecraft, publicly shamed by Jean-Luc Picard.’ ”

Eventually, Hwang determined that his only error was in simple arithmetic; the spacecraft was late to show up on the screen, but with no damage or repercussions. After finally settling down, Hwang realized the benefits of having a high-stakes job. “If it gets my blood pumping, I can tell I’m doing the right thing.”

Miranda Munoz, a sophomore biological sciences major — and the lone undergrad — was next to take the stage. When she was in the eighth grade, she woke up with a headache and received an initial diagnosis of vertigo; however, she wasn’t convinced this was the problem. After three visits to neurologists, she had became frustrated and fed up. “I hated my brain,” she said. She remembered thinking, “It’s what makes me who I am, but it’s giving me this great pain.” As she studied the brain more and more, she became increasingly intrigued by the complex organ.

On Dec. 20, 2010, Munoz’s father suffered from a sudden stroke. Speaking to a hushed audience, Munoz stated, “I had never hated the brain as much as I did that day.” Her father was in a wheelchair and had to relearn simple tasks such as signing his name and taking a few steps.

Avner Maiberg, a graduate student in computer science, began his tale by introducing millennium problems — a group of mathematical problems that have never been solved — and as a new and excited graduate student, the idea of taking one on. A huge fan of Jeopardy!, Maiberg was excited to work with his adviser, who had helped build IBM’s Watson and was a “vanguard of the robot uprising,” but sad to leave his girlfriend. As school moved forward, his relationship slowly deteriorated. Eventually, via Google Hangout, Maiberg’s girlfriend broke it off.

His living situation didn’t help. Finding an apartment through Craiglist, Maiberg’s roommates included “a 17-year-old girl, a Pitt student, and two men who told us they were uncle and nephew that insisted on living in the attic.” One day, police broke in to their home “NYPD style,” looking for the nephew-uncle duo. Amid a broken relationship, a police break-in, and impending finals, an impromptu trip to see a friend in Cambridge, Mass. helped clear his mind.

“I felt like I had some sort of crazed epiphany,” he said. Thinking back on the impossible millennium problems, Maiberg stated, “We are deterministic machines ourselves.” By being pushed to the brink, Maiberg realized there “were not shortcuts” in life. He returned to Carnegie Mellon, performed well on his finals, and moved on with a new perspective.

Lehocky is a candidate in the joint Carnegie Mellon and University of Pittsburgh M.D./Ph.D. program. Lehocky’s father worked construction, and growing up in the Pittsburgh area, Lehocky spent summers removing asbestos and septic tanks. Eventually, he learned to “get the hell out [of construction] and go into science.”

One day while presenting data to his research group, Lehocky noticed “people giggling and smirking during his presentation.” He was later asked by a colleague, “Do you always speak like that?” It was then that Lehocky began to realize that he “didn’t sound like the people he admired.” After that, he became self-conscious about his native Pittsburgh accent.

Lehocky planned to take a year off before continuing his education and applied to a fellowship at the University of Cambridge. Senior year, he decided to travel down south with a friend over Thanksgiving. On Thanksgiving morning — hung over from the previous night — he received a call from an unknown number. On the other end was “the most beautiful and eloquent English accent” he had ever heard. He then realized, “This is my professor, this is my interview, and the British do not observe Thanksgiving.”

In a state between being still drunk and not yet hungover, he had a two-hour conversation with his potential adviser. Lehocky had concerns about the call: “On the one hand, we had an extensive conversation for two hours. On the other hand, I sounded like a complete jagoff.” He was accepted to Cambridge, boosting his confidence in himself, idiosyncrasies and all, but ended up not attending. He never did leave Pittsburgh (or the Pittsburgh accent, for that matter).

The last story of the evening was told by Michelle Ntampaka, a Ph.D. student in the physics department. Ntampaka spoke about her tales in Rwanda, astrophysics, and (re)discovering the two loves of her life. Her story began in rural Pennsylvania, where Ntampaka remembers a feeling of enchantment and wonder looking into the dark sky.

After graduating college, Ntampaka held a bachelor’s degree in physics and a sense of restlessness. She traveled abroad to work as a volunteer with her church. The expedition was led by her minister, known as Pastor Bruce, who had three rules: one, follow his leadership; two, don’t complain; and three, don’t get involved in a romantic relationship.

The first two rules were no-brainers, and “the only person with a Y chromosome was Pastor Bruce,” so she didn’t think it would be a problem.

According to Ntampaka, upon landing in Rwanda she had been through two straight red-eye flights “and smelled like it.” But she suddenly stopped dead in her tracks at the Rwandan airport. “I saw the most handsome man I had ever seen,” she said. “From the neck up, he was National Geographic. From the neck down, he was Wall Street.” His name was Burton, he was the group’s guide, and Ntampaka had a feeling she was going to break one of Pastor Bruce’s rules.

During the trip, she and Burton spent time together, but Ntampaka remained obedient to Pastor Bruce’s no-relationship rule. Once the expedition was over, however, Ntampaka began regularly communicating with Burton on Skype, and even traveled to Rwanda twice.

During one conversation, Burton finally said, “Michelle, I think you need to marry me.” She agreed.

“I crammed my wedding dress into a Tupperware container, wrapped it in duct tape, and used it as my personal item for my last transatlantic flight as a single woman,” she told the audience. The duo married and moved back to America, both starting new chapters in their lives.