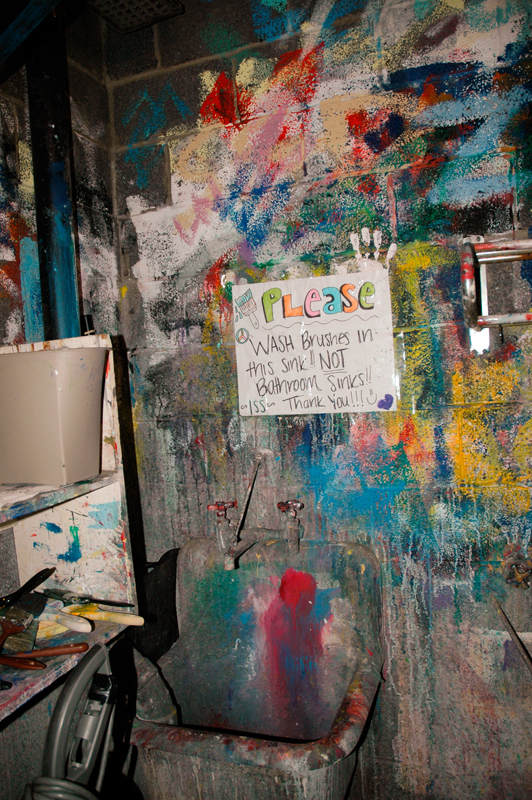 Students wishing to wash paintbrushes must do so in the janitor’s closet in Doherty Hall. (credit: Noël Um/News Co-Editor)

Multicolored dribbles of paint up the steps and down the hallway of Doherty Hall have caused the reinforcement of rules regarding the Fence.

Last Thursday, the student government Executive Committee sent out an email to the campus community outlining existing rules about the use of paint in the areas surrounding the Fence.

The rules for the Fence, according to university guidelines, include using only paintbrushes, keeping paint and paint materials only within the gravel area surrounding the Fence, removing paint supplies after finishing painting, utilizing the sink in the janitor’s closet in Doherty Hall instead of the first floor bathroom sinks to clean paintbrushes, and not dripping paint on the steps outside or inside Doherty Hall.

The paint smudges, which have been a recurring issue since last spring, are technically considered campus vandalism. Additionally, such vandalism, especially paint on the steps and inside of Doherty Hall, may be a costly fix.

Sophomore mechanical engineering major Anna Mirabella, who took the Fence with the Kappa Alpha Theta pledge class, said that she witnessed paint dribbles in Doherty, specifically in the first floor bathroom. “It was definitely a problem before, but I think that this is a very simple change that people can make that will help keep our school cleaner. Paint isn’t always to easy to clean up, so it also wasn’t fair to make other people clean up after the students’ mess.”

Student government has rarely found reason in the past to enforce the rules for the Fence, according to student body president Lindsay MacGillivray.

“In the past we had not set any specific guidelines because we felt it was something that as a campus, we shared and held together, but at the same time, if students are damaging campus property, something needs to be done,” she said.

The rules regarding the Fence were purposely written vaguely because of the sense that the Fence is not owned by the university, but by the student body as a whole.

“The responsibility and the privileges of the Fence are shared by all students on campus and so when people felt like they needed to complain about it was student government, but really we don’t have any set jurisdiction over it,” MacGillivray said.

“We wanted to have a more clear definition of what the rules meant. We took what already existed, and put it in more specific terms,” MacGillivray continued.

In order to enforce better care of campus property and the Fence, student government has issued signs, which are currently posted in Doherty and on the tables near the Fence, reminding students to be careful about dripping paint.

The student government Executive Committee is also putting out plastic bags by the Fence to alleviate the problem of dripping paint inside Doherty as students are carrying their paintbrushes to the sink for washing. The last component of the enforcement of these rules includes a fine, which will be charged against the organizations that are found to have dripped paint and vandalized campus property.

According to MacGillivray, student government will be flexible in charging organizations for the fines, however, she hopes that the action taken to prevent such vandalism will eliminate the issue.

Sophomore information systems major Nathan Oh said that even though he is involved with Asian Students Association and Sigma Alpha Epsilon — and has painted the Fence multiple times — he was unaware of the Fence painting rules. “I didn’t know that dripping paint outside of the Fence area was considered vandalism, so I think it was a good first step that student government sent out that email, because now I and others know, and will be more careful.”