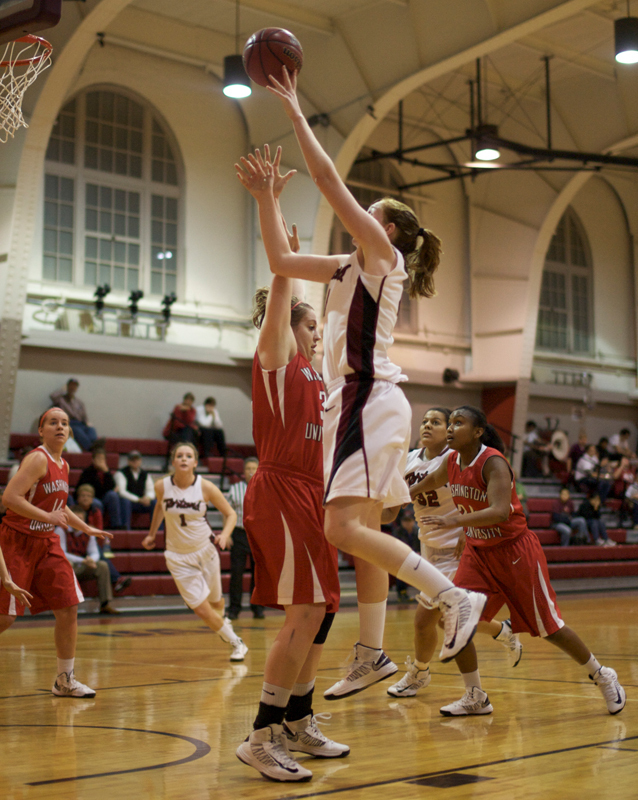 The women's basketball team won 76–68 against the University of Chicago Maroons at home yesterday, bringing the Tartans to 11–7 overall and 3–4 in the University Athletic Association (UAA) conference.

First-year guard Amanda McHenry, sophomore guard Gabrielle West, senior forward Emily Peel, and first-year forward Liza Otto all made big plays that contributed to the team’s win. West was the Tartan’s leading scorer, accumulating a total of 17 points and establishing a halftime lead. “Our composure and focus stayed strong until the very end when we needed it most,” Otto said.

Peel and Otto both had excellent games, scoring double digits by taking advantage of rebounds and three-pointers. McHenry had a 10-point run late into the second half to break the 61–61 tie with two minutes to go.

“Our positive attitude and ability to play together within our system when the game got close helped the team win today,” said senior captain Tori Baggio.

On Friday, however, the team was not able to work as well, and experienced a difficult conference match against the ladies from Washington University in St. Louis, losing 73–57.

The Washington University in St. Louis Bears, coming off a monstrous 60–28 rout of Brandeis University, had momentum and energy on their side as they displayed focus and aggression against the Tartans. The Bears are currently 15–2 in the season, with five wins and just one loss in the UAA conference.

The Bears started out strong, scoring 20 points against the Tartans’ 10 in the first eight-and-a-half minutes of the game; the Tartans only experienced a lead once in the game (three minutes into the match), with the Bears leading the rest of the game.

The Bears rounded out the first half of the game with a score of 34–28 and, despite a good comeback effort in the middle of the second half by the Tartans, the Bears performed exceptionally toward the end of the game.

First-year center Lauren Maturo said, “We needed to be more aggressive, especially on defense,” pointing out that the team did not display the intensity it exhibited in wins earlier in the season. Maturo added that “[Washington University in St. Louis] went to the free-throw line twice as much as we did,” which head coach Jacquie Hullah told the team that it was one of the weakest points in their game.

Despite the shortcomings voiced by the team, others praised its positive qualities. Lisa Natale, a first-year engineering major and supporter, praised the team for the “great communication and team dynamic between players.”

The Tartans will journey to St. Louis to face the Bears again on Friday to close out the last month of regular-season play on a high note.