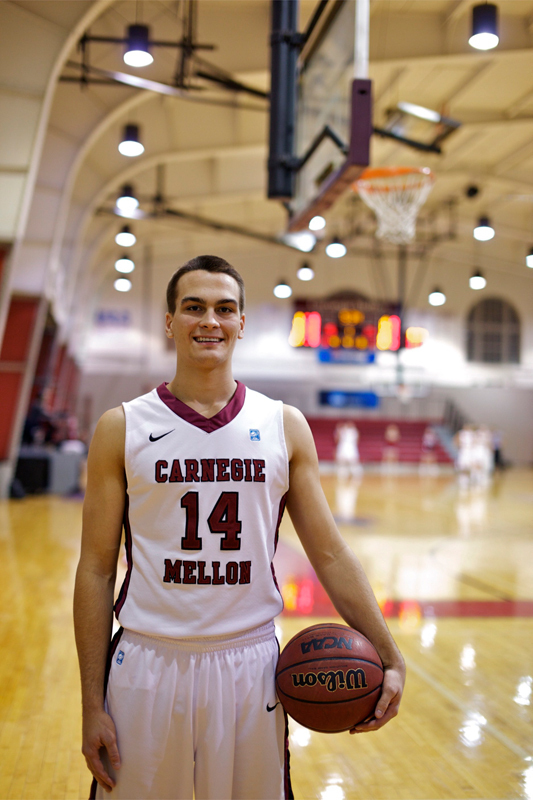 Sophomore Seth Cordts, affectionately known by his coach and teammates as “Zeff,” knows how to dunk and do it all. (credit: Jonathan Leung/Assistant Photo Editor)

Sophomore Seth Cordts, affectionately known by his coach and teammates as “Zeff,” knows how to dunk and do it all.

The mechanical and biomedical engineering double major has maintained a rigorous course load while playing on the Carnegie Mellon men’s basketball team.

His hard work and persistence have proven to be a necessity to the team, which currently stands at a 1–6 University Athletics Association Conference record. “We’ve had a lot of tough breaks and close games,” Cordts said.

Yet he still holds onto his preseason expectations of a “great season,” as long as his teammates “forget about the past losses, and finish out strong.”

The Tartans’ luck seems to be slowly reversing. The team won 75–74 in an overtime thriller against the University of Chicago Maroons yesterday.

Cordts proved crucial in overtime, putting the team ahead shortly before junior Asad Meghani, one of the team captains, made the game-winning basket.

Cordts believes the biggest team accomplishments were the wins against Bethany College and LaRoche College, but also cited the team’s performances in losses as well.

“We’ve certainly fought, every step of the way,” Cordts said.

Cordts has helped greatly in the Tartans’ fight, becoming a leader in both shooting and ball control.

“It was great to become a starter this season,” Cordts said. “But even more so, I felt as though I became a leader and helped my team play better.”

A native of Amherst, N.H., and a triplet with two athletic sisters, Zeff has played basketball since the third grade and has since fallen in love with the quick pace of the game.

“You win one, you lose one; it’s a quick turnaround. You can have an awful game one day and the best game of your life the next,” Cordts said.

He mentioned the sport is significantly different on the college level, and described it as “more competitive, and physically demanding.”

Yet for Cordts, the “hard work pays off,” as the “excitement of making a good shot” is universal.

“Seth has come a long way since his first year,” Meghani said. “He’s always brought a great attitude and great work ethic to the team. He’s always putting in extra work, whether it be in the weight room or shooting drills. He has a bright future ahead of him.”

Cordts emphasizes not only the excitement of the sport, but the camaraderie developed as being a member of a team. The team is “very close” and “[we] always have a good time together.”

“Usually when we go out to eat on away trips, we tell the waitress that it is someone’s birthday, even when it’s not,” Cordts said.

“Especially with the Carnegie Mellon basketball team, the team chemistry is what I love the most. We both play and study together. You know that you’ll be long-lasting friends with your teammates,” he said.

The respect is certainly mutual, as Cordts has been hailed by his teammates for his work ethic. “Seth brings a contagious amount of focus and hard work every day to practice,” sophomore Drew Holinski said. “This isn’t easy to do by itself. But Seth did it while carrying a 4.0 GPA and working 15–20 hours per week last semester.”

Despite his borderline-crazy schedule, Cordts continues to serve as a role model for the team.

“When somebody on the team thinks that they can’t summon up a little more energy in practice because of a hectic week or heavy work load, it helps to look at Seth and know that we have no right to make excuses,” Holinski said.

“It wouldn’t be a stretch to label Seth as CMU’s exemplar of hard work and time management.”