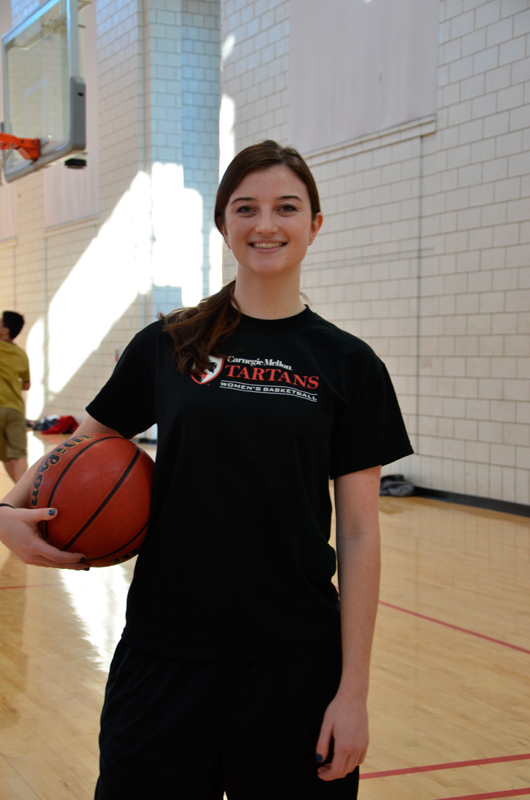 Although many would recognize her as the sweet, smiling first-year girl strolling around campus, few others know of Liza Otto’s basketball prowess.

Otto, despite being in the middle of what she calls “the tough transition period to college basketball,” has helped lead the Tartans’ women’s basketball team to their best record in years, with an overall 10–6 record.

For the past 10 seasons, the best the Tartans have performed in the University Athletic Association (UAA) Conference has been 2–12 for the entire season, making their overall winning record so far a major accomplishment.

Otto has been a top-contributing starter to the team, recently leading victories over Case Western University and Brandeis University.

In Friday’s game against the University of Rochester, Otto achieved a career-high 13 rebounds for the Tartans.

On Dec. 29 last year, Otto scored 12 points and 10 rebounds to achieve her second double-double of the season.

Otto has been one of the team’s most consistent top scorers this year, scoring 13 points in their most recent game.

She is currently ranked in several categories in the UAA conference, which include total points, rebounding, assists, free-throw percentage, and blocked shots.

Her teammates attribute her success to her positive attitude. “Liza has a hard-working attitude and poise on the court,” said senior captain Tori Baggio.

“She’s been such a positive force for the team so far,” said sophomore teammate Chandler Caufield. “She is an integral part of our team.”
Hailing from Glastonbury, Conn., Otto certainly has had experience with the sport of basketball.

She has played since she was seven years old, and said she loves “being part of a team with people that you can rely on and trust.”

Otto is currently in the Bachelor of Humanities and Arts program.

An architecture and psychology major, said she loves the Carnegie Mellon team because of “team chemistry” and that the “program has provided [her] with stellar academics and a competitive level of basketball.”

She said that although she was not sure what to expect coming into the season, knowing that the team was still growing and adjusting to a new coach, she has been surprised by the excellent team’s level of success. Not only has Otto and the team had to adjust to the coaching staff, but Otto herself has switched positions several times this season, playing everything from forward to guard.

Otto has been “humbled by [her] experience as a first-year starter,” but remains focused on the team’s future goals.

“I hope we can make it to the conference championships,” Otto said. “I really think that we can leave our mark this season.”

Her teammates agree. “This is the best we’ve done in the conference in a long time. We want to make a statement and show everyone that Carnegie Mellon is a new team and that we’re a force to be reckoned with,” Baggio said.

The new team hopes to celebrate itself by planning a summer trip to Europe, but for now, Otto and the Tartans will continue to work on improving their record and “making the most out of this season.”

Otto also emphasized the importance of the coaches in the team’s success, and cited their efforts to make the season both rewarding and enjoyable.

“They help motivate us a lot,” Otto said. “The assistant coaches, Tiff and Sarah, even reward us for making good plays by giving us socks!”

Otto’s positivity, fun spirit and true love for the game is illuminated by her hopes for the rest of the season. “I think if we work hard enough, anything is possible,” she said. “We’re just that kind of team.”