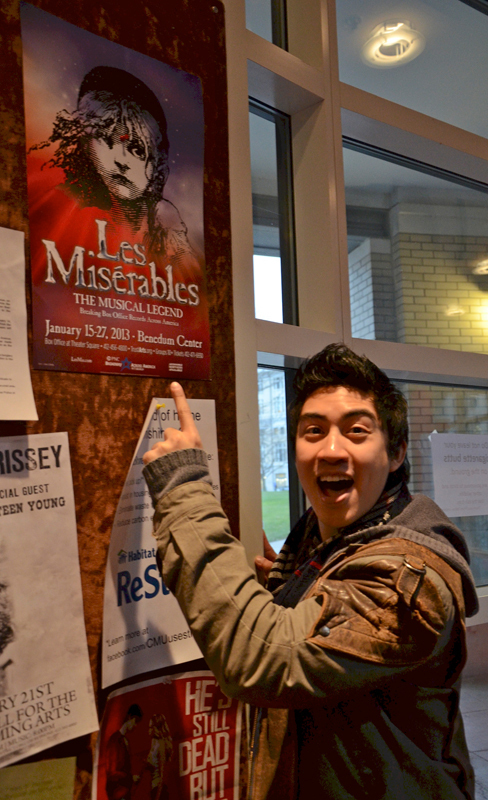 Devin Ilaw, an alumus of Carnegie Mellon’s School of Drama, is back in Pittsburgh as part of Broadway Across America’s production of Les Misérables. (credit: Kate Groschner/Photo Editor)

For the professional actor, it’s rare and exciting to find a role that unites both commercial and artistic success. But Carnegie Mellon alumnus Devin Ilaw (CFA ’07) believes he’s found that role.

Since graduating with a BFA in acting and musical theatre in 2007, Ilaw has landed a couple of major gigs, playing Thuy in Miss Saigon and appearing on Late Night with Conan O’Brien.

But his role as Marius in the PNC Broadway Across America tour of Les Misérables, which is now playing at the Benedum Center in Pittsburgh, is by far the most significant.

Thomas Douglas, Ilaw’s former vocal coach and an associate teaching professor of voice at Carnegie Mellon, had confidence in him from the onset. While working with Ilaw on a School of Drama project, “it was clear to me then, that he was a very special young man,” Douglas said in an email. “I’m not at all surprised to hear of his varied successes in the professional world.”

As an actor on a Broadway tour, Ilaw must undertake a daunting task every time he arrives in a new city. According to him, the actors on tour never have time to rehearse in the theater where they actually perform — aside from the sound check that occurs only two hours before the show.

Surprisingly, Ilaw is able to take this challenge in stride. “It’s less nerve-wracking,” he said in an interview. “It’s more that you learn to trust the people around you. Trust your show, trust the theater.”

The traditional Broadway favorite has recently garnered even more attention because of last month’s release of the film adaptation. Les Misérables tells the story of criminal-turned-mayor Jean Valjean and his efforts to evade the pursuit of a vindictive policeman, set against the tragic backdrop of the French Revolution. In the Broadway Across America production, Ilaw plays Marius, a young revolutionary who falls in love with Valjean’s adoptive daughter.

Despite having spent more than five years in the professional acting business, Ilaw still attributes many of the skills he uses onstage to his School of Drama education. “The program is so grueling, it teaches you to be everything and anything,” he said. “It taught me how to be an artist.” Malleability as an actor is a fundamental skill he learned at Carnegie Mellon and continues to use in his pursuits as a professional actor.

Ilaw uses those skills every time he gets onstage to keep his performances fresh and interesting for his audience. But breathing life into each performance isn’t just for the audience’s sake. For Ilaw, it’s crucial that actors continuously engage with their roles: “As an artist, you don’t want to be bored.”

Ilaw further underscored the importance of constant discovery for young actors. “Make new discoveries all the time,” he urged. Part of the wonder of interacting with fellow actors, Ilaw said, is not only making discoveries about yourself, but also seeing new qualities in other actors. “Try to find those epiphanies,” he said — then, correcting himself: “Try to allow the epiphanies to happen.”

Ilaw believes the best epiphanies happen when the true qualities of an actor shine through in a performance. He prides himself in particular on “always bringing myself to a role … finding elements of me in a character.” In this way, Ilaw urges young actors to “be true to yourself” — to allow personal qualities to emerge both onstage and off, whether in character or not.

However, Ilaw doesn’t rely solely on himself for guidance in a role. In his role as Marius, he draws heavily from the Victor Hugo novel, upon which the musical is based, for inspiration and affirmation. He carries a brown, worn, leather-bound notebook filled with quotes from the book and other notes, which he occasionally pulls out for reference. “I always go back to the book,” he said.

Although Ilaw is proud of certain aspects of his work, he still strives to challenge himself in other areas. As an artist, Ilaw said, “It’s hard to be happy with your work.” While to an extent, Ilaw does consider himself a perfectionist, he recognizes the need for imperfection in acting: “Perfection is not interesting.” Just as a character’s flaws in a play or musical compel the audience, an actor’s imperfections add variety and spice onstage. Moving forward, Ilaw’s goals are simple: “Stay positive, stay happy, and keep myself artistically challenged.”

Looking to the future, he is casually optimistic; rather than pointing to specific career goals, Ilaw said he “can’t wait to see where the path is going to lead” — emphasizing that “I often let the path lead me.”

And overall, Ilaw is happy — especially with his current role in Les Misérables. “Commercial success doesn’t equal artistic success, but the hope is that they come together,” Ilaw said. “_Les Mis_ really is it.”